Europa: Catching Up with the Clipper

I get an eerie feeling when I look at spacecraft before they launch (not that I get many opportunities to do that, at least in person). But seeing the Spirit and Opportunity rovers on the ground at JPL just before their shipment to Florida was an experience that has stayed with me, as I pondered how something built by human hands would soon be exploring another world. I suppose the people who do these things at the Johns Hopkins Applied Physics Laboratory and the Jet Propulsion Laboratory itself get used to the feeling. For me, though, the old-fashioned ‘sense of wonder’ kicks in long and hard, as it did when Europa Clipper arrived recently at JPL.

Not that the spacecraft is by any means complete, but its main body has been delivered to the Pasadena site, where it will see final assembly and testing over a two-year period. Here I fall back on the specs to note that this is the largest NASA spacecraft ever designed for exploration of another planet. It’s about the size of an SUV when stowed for launch, but we know from the James Webb Space Telescope how large these things can become when fully deployed. In Europa Clipper’s case, the recently delivered main body is 3 meters tall and 1.5 meters wide. Extending the solar arrays and other deployable equipment takes it up to basketball court size. 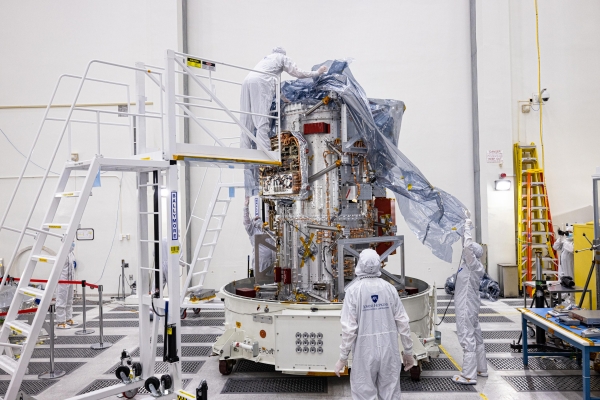 Image: The main body of NASA’s Europa Clipper spacecraft has been delivered to the agency’s Jet Propulsion Laboratory in Southern California, where, over the next two years, engineers and technicians will finish assembling the craft by hand before testing it to make sure it can withstand the journey to Jupiter’s icy moon Europa. Here it is being unwrapped in a main clean room at JPL, as engineers and technicians inspect it just after delivery in early June 2022. Credit: NASA.

Eight antennas are involved, powered by a radio frequency subsystem that will service a high-gain antenna measuring three meters wide, and as JPL notes in a recent update, the electrical wires and connectors collectively called the ‘harness’ themselves weigh 68 kilograms. Stretch all that wiring out and you get 640 meters, taking us twice around a football field. The main body will include a fuel tank and an oxidizer tank connecting to an array of 24 engines. Tim Larson is JPL deputy project manager for Europa Clipper:

“Our engines are dual purpose. We use them for big maneuvers, including when we approach Jupiter and need a large burn to be captured in Jupiter’s orbit. But they’re also designed for smaller maneuvers to manage the attitude of the spacecraft and to fine tune the precision flybys of Europa and other solar system bodies along the way.”

So what is arriving, or has arrived at JPL, is a spacecraft in pieces, its main body now joining key instruments like E-THEMIS, a thermal emission imaging system developed at Arizona State, and Europa-UVS, the mission’s ultraviolet spectrograph. E-THEMIS is an infrared camera that should give us insights into temperatures on the Jovian moon, and hence offer information about its geological activity. Given that we’re interested in finding places where liquid water is close to the surface, the data from this instrument should be extremely valuable during the spacecraft’s nearly fifty close passes.

The theory here is that as Europa’s surface cools after local sunset, the areas of the most solid ice will retain heat longer than areas with a looser, more granular texture. E-THEMIS will be able to map cooling rates across the surface. The infrared camera works in three heat-sensitive bands, and the warmer regions it should see may be the result of liquid water close to the surface, or possible impacts or convection activity. Not surprisingly, E-THEMIS lead project engineer Greg Mehall points to the radiation environment in Jupiter space as one of the team’s biggest issues:

“The extreme radiation environment at Europa gave far more design challenges for the ASU engineering team than on any previous instrument we’ve developed. We had to use dense shielding materials, such as copper-tungsten alloys, to provide the necessary protection from the expected radiation. And to ensure that E-THEMIS will survive during the mission, we also carried out radiation tests on the instrument’s electronic components and materials.”

Image: The thermal imager will use infrared light to distinguish warmer regions on Europa’s surface, where liquid water may be near the surface or might have erupted onto the surface. The thermal imager will also characterize surface texture to help scientists understand the small-scale properties of Europa’s surface. In the image above, we’re seeing a diurnal temperature color image from the first light test of Europa Clipper’s thermal imager (called E-THEMIS), taken from the rooftop of the Interdisciplinary Science and Technology Building 4 on the Tempe Campus of Arizona State University (ASU). The top image was acquired at 12:40 PM, the middle at 4:40 PM, and the bottom image at 6:20 PM (after sunset). Temperatures are approximations during this testing phase. Credit: ASU.

As to the Europa-UVS instrument, this ultraviolet spectrograph will search for water vapor plumes and study the composition of both the surface and the tenuous atmosphere as it uses an optical grating to spread and analyze light, identifying basic molecules like hydrogen, oxygen, hydroxide and carbon dioxide.

The spacecraft’s visible light imaging system (EIS) is going to upgrade those well-studied images from the Galileo mission enormously. The plan is to map 90 percent of the moon’s surface at 100 meters per pixel, which is six times more of Europa’s surface than Galileo, and at five times better resolution. And when Europa Clipper swings close to Europa during a flyby, it will produce images with a resolution fully 100 times better than Galileo. The Europa Imaging System includes both wide- and narrow-angle cameras, each with an eight-megapixel sensor. Both of these cameras will produce stereoscopic images and include the needed filters to acquire color images.

All told, the spacecraft’s nine science instruments should be able to extract information about the depth and salinity of the ocean under the ice and, crucially, the thickness of the ice crust (I can imagine wagers on that issue going around in certain quarters). Gathering information about the moon’s surface and interior should further illuminate the issue of plumes from the ocean below that may break through the ice.

Assembly, test and launch is a two year phase that, by the end of this year, should see assembly of most of the flight hardware and the remaining science instruments. Kudos to JHU/APL, which has just delivered a flight system that is the largest ever built by engineers and technicians there. Now we look toward bolting on the radio frequency module, radiation monitors, power converters, the propulsion electronics and those hundreds of meters of wiring. Not to mention the electronics vault that must stand up to hard radiation.

The full instrument package will include an imaging spectrometer, ice-penetrating radar, a magnetometer, a plasma instrument, a mass spectrometer and a dust analyzer. Only two years and four months before launch onto a six-year journey of 2.9 billion kilometers. Europa Clipper isn’t a life-finder, but it does have the capability of detecting whether the moon’s ocean really does allow for the possibility of life to develop. It’s our first reconnaissance of Europa since the 1990s. What surprises will it reveal?

Bear in mind, too, that we still have ESA’s JUICE (JUpiter ICy moons Explorer) in the offing, with launch planned for 2023. I note with interest that on June 19, Europa will occult a distant star, which should be useful in tweaking our knowledge of the moon’s orbit before the arrival of both missions. Destined to end its life as a Ganymede orbiter, JUICE will make only two close passes of Europa, but its period of operations will coincide with part of Europa Clipper’s numerous flybys of the moon.

Next post: Comet Interceptor Could Snag an Interstellar Object