Let’s catch up with white dwarfs, a kind of star that may spawn planetary systems of its own. For I’ve just found another case of archival data being put to good use in the form of a study of a white dwarf system called G238-44. Here, the data come from the Hubble instrument (specifically, its Cosmic Origins Spectrograph and Space Telescope Imaging Spectrograph), the Far Ultraviolet Spectroscopic Explorer (FUSE), and the Keck Observatory’s High Resolution Echelle Spectrometer (HIRES) in Hawaii.

What astronomers presented at a recent AAS conference is a picture of a system severely disrupted by its star’s transition to white dwarf status. Moreover, this is a star in the process of accretion with a distinct twist from earlier such discoveries. For the white dwarf – the remnant left behind after the system’s star went through its red giant phase – is actively drawing rocky and metallic material as well as ices from the debris of the disrupted system. These are the stuff of planet formation. We’re learning how extreme are conditions in what astronomers call an ‘evolved’ planetary system as it undergoes destruction and what may be a kind of rebirth. 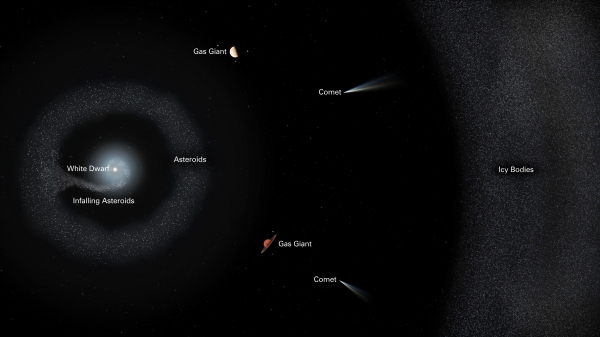 Image: This illustrated diagram of the planetary system G238-44 traces its destruction. The tiny white dwarf star is at the center of the action. A very faint accretion disk is made up of the pieces of shattered bodies falling onto the white dwarf. The remaining asteroids and planetary bodies make up a reservoir of material surrounding the star. Larger gas giant planets may still exist in the system. Much farther out is a belt of icy bodies such as comets, which also ultimately feed the dead star. Credit: NASA, ESA, Joseph Olmsted (STScI).

In relation to main sequence stars, white dwarfs give us new assumptions about planet formation. Such a star contains half the mass of the Sun, for example, but while it’s only a bit bigger than the Earth, it sports a density of 1 x 109 kg/m3. The average white dwarf is 200,000 times as dense as the Sun, a remnant stellar core with a temperature in the range of 100,000 Kelvin. And the system it finds itself in, surviving the red giant phase of the star, is hardly a static place.

To analyze what is happening at G238-44, we have to take into account that the original red giant, perhaps much like the Sun in its earlier days, would have cast off its outer layers as nuclear burning ceased. This shedding of mass can cause asteroids and small moons to be scattered gravitationally by remaining large planets, their own orbits disrupted. Materials like these experience tidal forces that can tear them apart as they move inward toward the star. The result: A disk of gas and dust that, over time, settles onto the surface of the white dwarf and throws a distinct observational signal.

At G238-44, the white dwarf left behind is seen in the process of accreting two such objects, a process observed before in a number of white dwarf systems but never with both icy and rocky-metallic components in the mix. Now we have a case of a white dwarf evidently drawing on a planetary system that was once abundant in ices. As UCLA’s Benjamin Zuckerman, a co-author of the paper on this work, notes:

“Life as we know it requires a rocky planet covered with a variety of elements like carbon, nitrogen, and oxygen. The abundances of the elements we see on this white dwarf appear to require both a rocky and a volatile-rich parent body – the first example we’ve found among studies of hundreds of white dwarfs.”

Within about 100 million years of the white dwarf’s formation, the star will be capturing material from regions analogous to our asteroid and Kuiper Belt. The total mass involved in this study is relatively small, about that of a large asteroid. Nitrogen, oxygen, magnesium, silicon and iron have been measured in the debris disk here, and in interesting proportions. Lead researcher Ted Johnson, a colleague of Zuckerman’s at UCLA, sees a 2-1 mix of Mercury-like material – high in iron and suggestive of a metallic planetary core – mixing with the comet-like debris. 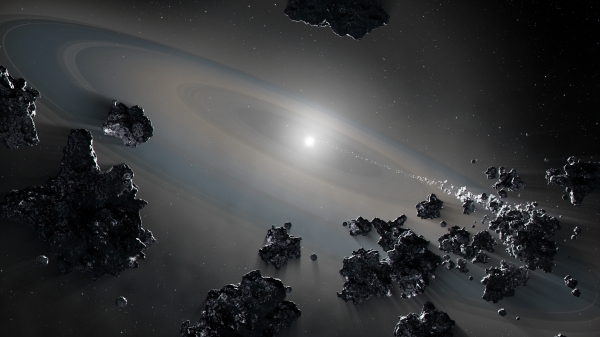 Image: This illustration shows a white dwarf star siphoning off debris from shattered objects in a planetary system. The Hubble Space Telescope detects the spectral signature of the vaporized debris that reveals a combination of rocky-metallic and icy material, the ingredients of planets. The findings help describe the violent nature of evolved planetary systems and the composition of its disintegrating bodies. Credit: NASA, ESA, Joseph Olmsted (STScI).

Terrestrial Planet in the Habitable Zone?

With this destruction derby in mind, let’s catch up with the white dwarf WD1054–226, found not so long ago to have objects – apparently of small moon or asteroid size – orbiting close to the star. Their presence is an indication, according to astronomers at University College London, that there may be a nearby planet in the star’s small habitable zone. This finding is based on data from the ESO’s 3.5m New Technology Telescope (NTT) at the La Silla Observatory in Chile. Fully 65 dips in the star’s light show the extent of the orbital material, whipping around the star in clouds every 25 hours.

A planet farther out seems the best explanation for how this arrangement stays in place, and if it is there, it would be in an orbit about 1.7 percent of the distance between the Earth and the Sun (roughly 2.5 million kilometers). That’s in the liquid water habitable zone, and the planet would be about the size of the Earth, based on these calculations.

What interesting scenarios stars like these represent. 95 percent of the stars in the galaxy will eventually become white dwarfs, with our Sun joining their ranks in four or five billion years. At WD1054-226, we’re hypothesizing the existence of a kind of planet that has yet to be confirmed around such a star. UCL’s Jay Farihi is lead author of the paper on this work:

“This is the first time astronomers have detected any kind of planetary body in the habitable zone of a white dwarf. The moon-sized structures we have observed are irregular and dusty (e.g. comet-like) rather than solid, spherical bodies. Their absolute regularity is a mystery we cannot currently explain. An exciting possibility is that these bodies are kept in such an evenly-spaced orbital pattern because of the gravitational influence of a nearby major planet. Without this influence, friction and collisions would cause the structures to disperse, losing the precise regularity that is observed. A precedent for this ‘shepherding’ is the way the gravitational pull of moons around Neptune and Saturn help to create stable ring structures orbiting these planets.” 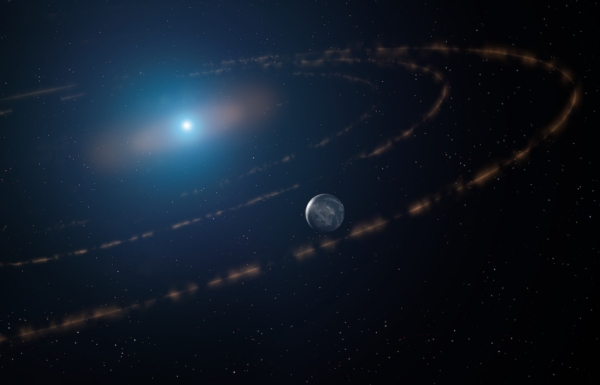 Image: An artist’s impression of the white dwarf star WD1054–226 orbited by clouds of planetary debris and a major planet in the habitable zone. Credit Mark A. Garlick / markgarlick.com. License type Attribution (CC BY 4.0).

Tantalizing, but remember that the ‘planet’ here is unconfirmed. JWST data on the debris disk would be helpful as we learn more. White dwarf planets of terrestrial size should eventually turn up if they’re out there in any numbers. If we could find a transit, we’d be looking at a world as large as the star it orbits. The transit depth that would afford if we can find a system so aligned would make for an unforgettable light curve.