While we talk often about subsurface oceans in places like Europa, the mechanisms for getting through layers of ice remain problematic. We’ll need a lot of data through missions like Europa Clipper and JUICE just to make the call on how thick Europa’s ice is before determining which ice penetration technology is feasible. But it’s exciting to see how much preliminary work is going into the issue, because the day will come when one or another icy moon yields the secrets of its ocean to a surface lander.

By way of comparison, the thickest ice sheet on Earth is said to reach close to 5,000 meters. This is at the Astrolabe Subglacial Basin, which lies at the southern end of Antarctica’s Adélie Coast. Here we have glacial ice covering continental crust, as opposed to ice atop an ocean (although there appears to be an actively circulating groundwater system, which has been recently mapped in West Antarctica). The deepest bore into this ice has been 2,152 meters, a 63 hour continuous drilling session that will one day be dwarfed by whatever ice-penetrating technologies we take to Europa.

Consider the challenge. We may, on Europa, be dealing with an ice sheet up to 25 kilometers thick – figuring out just how thick it actually is may take decades if the above missions get ambiguous results. In any case, we will need hardware that can operate at cryogenic temperatures in a hard vacuum, with radiation shielding adequate to the Jovian surface environment. The lander, after all, remains on the surface to sustain communications with the Earth.

Moreover, we need a system that is reliable, meaning one that can work its way around problems it finds in the ice as it moves downward. Here again we need ice profiles that can be developed by future missions. We do know the ice we encounter will contain salts, sulfuric acids and other materials whose composition is currently unknown. And we will surely have to cope with liquid water ‘pockets’ on the way down, as well as the fact that the ice may be brittle near the surface and warmer at greater depths.

NASA’s SESAME program at Glenn Research Center, which coordinates work from a number of researchers, is doing vital early work on all these problems. On its website, the agency has listed a number of assumptions and constraints for a lander/ice penetrator mission, including the ability to reach up to 15 kilometers within three years (assuming we learn that the ice isn’t thicker than this). For preliminary study, a total system mass of less than 200 kg is assumed, and the overall penetration system must be able to survive three years of operations in this hostile environment.

So far this program is Europa-specific, the acronym translating to Scientific Exploration Subsurface Access Mechanism for Europa. The idea is to identify which penetration systems can reach liquid water. It’s early days for thinking about penetrating Europa and other icy moon oceans, but you have to begin somewhere, and SESAME is about figuring out which approach is most likely to work and developing prototype hardware.

SESAME is dealing with proposals from a number of sources. Johns Hopkins, for example, will be testing communication tether designs and analyzing problems with RF communications. Stone Aerospace is studying a closed-cycle hot water drilling technology running on a fission reactor. Georgia Tech is contributing data from projects in Antarctica and studying a subsurface access drill design, hoping to get it up to TRL 4. Honeybee Robotics is focused on a “hybrid, thermomechanical drill system combining thermal (melting) and mechanical (cutting) penetration approaches.”

We’re pretty far down on the TRL scale (standing for Technology Readiness Level), which goes from 1 to 9, or from back of the cocktail lounge napkin drawings up to tested flight-ready hardware. Well, I shouldn’t be so cavalier about TRL 1, which NASA defines as “scientific research is beginning and those results are being translated into future research and development.” The real point is that it’s a long haul from TRL 1 to TRL 9, and the nitty gritty work is occurring now for missions we haven’t designed yet, but which will one day take us to an icy moon and drill down into its ocean.

Let’s home in on work that’s going on at the Jet Propulsion Laboratory, in the form of SWIM (Sensing With Independent Micro-Swimmers), a concept that, in the hands of JPL’s Ethan Schaler, has just moved into Phase II funding from NASA’s Innovative Advanced Concepts program. The $600,000 award should allow Schaler’s team to develop and test 3D printed prototypes over the next two years. The plan is to design miniaturized robots of cellphone size that would swarm through subsurface oceans, released underwater from the ice-melting probe that drilled through the surface.

Schaler, a robotics mechanical engineer, focuses on miniaturization because of the opportunity it offers to widen the search space:

“My idea is, where can we take miniaturized robotics and apply them in interesting new ways for exploring our solar system? With a swarm of small swimming robots, we are able to explore a much larger volume of ocean water and improve our measurements by having multiple robots collecting data in the same area.” 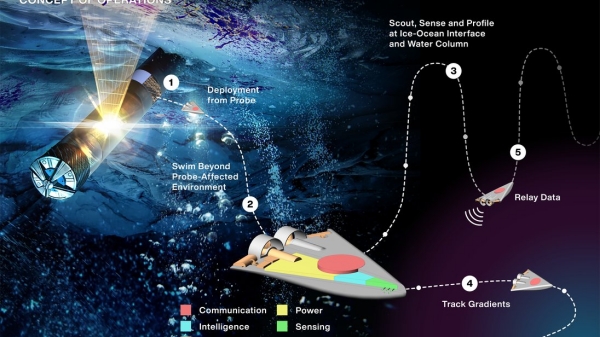 Image: In the Sensing With Independent Micro-Swimmers (SWIM) concept, illustrated here, dozens of small robots would descend through the icy shell of a distant moon via a cryobot – depicted at left – to the ocean below. The project has received funding from the NASA Innovative Advanced Concepts program. Credit: NASA/JPL-Caltech.

We are talking about robots described as ‘wedge-shaped,’ each about 12 centimeters long and 60 to 75 cubic centimeters in volume. Space is tight on the cryobot that delivers the package to the Europan surface, but up to 50 of these robots could fit into the envisioned 10-centimeter long (25 centimeters in diameter) delivery package, while leaving enough room for accompanying instruments that will remain stationary under the ice.

I mentioned the Johns Hopkins work on communications tethers, and here the plan would be to connect to the surface lander (obviously ferociously shielded from radiation in this environment), allowing an open channel for data to flow to controllers on Earth. The swarm notion expands the possibilities for what the ice penetrating technology can do, as project scientist Samuel Howell, likewise at JPL, explains:

“What if, after all those years it took to get into an ocean, you come through the ice shell in the wrong place? What if there’s signs of life over there but not where you entered the ocean? By bringing these swarms of robots with us, we’d be able to look ‘over there’ to explore much more of our environment than a single cryobot would allow.” 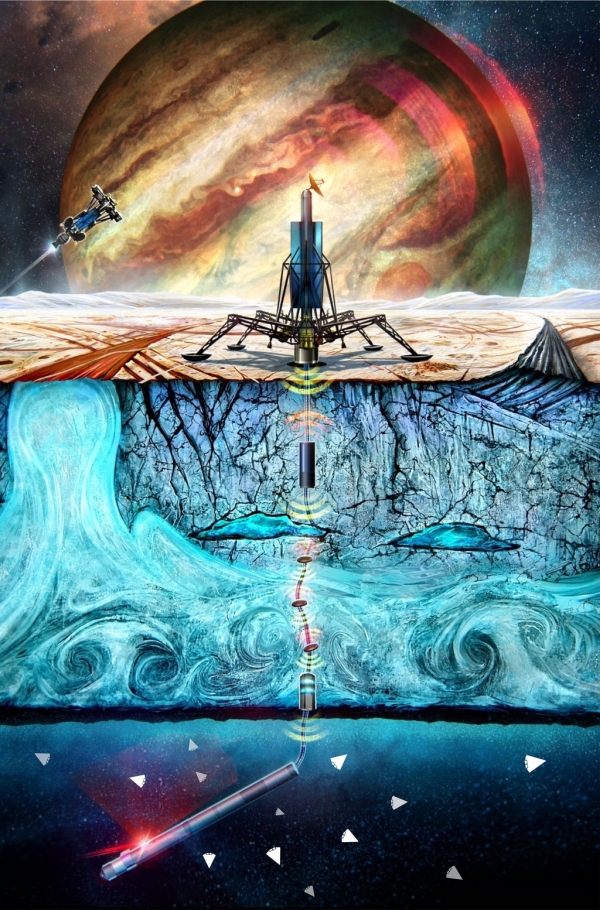 One of the assumptions built into the SESAME effort is that the surface lander will use one of two nuclear power systems along with whatever technologies are built into the penetration hardware. Thus for the surface cryobot we have the option of a “small fission reactor providing 420 We and 43,000 Wth waste heat” or a “radioisotope power system providing up to 110 We and 2,000 Wth waste heat.” SWIM counts on nuclear waste heat to melt through the ice and also to produce a thermal bubble whose reactions with the ice above could be analyzed in terms of water chemistry.

The robots envisioned here have to be semi-autonomous, each with its own propulsion system, ultrasound communications capability and basic sensors, including chemical sensors to look for biomarkers. Overlapping measurements should allow this ‘flock’ of instrumentation to examine temperature or salinity gradients and more broadly characterize the chemistry of the subsurface water. We’ll follow SWIM with interest not only in the context of Europa but other ocean worlds that may be of astrobiological significance. If life can exist in these conditions, just how much biomass may turn up if we consider all the potential ice-covered oceans on moons and dwarf planets in the Solar System?