Getting Down to Business with JWST

So let’s get to work with the James Webb Space Telescope. Those dazzling first images received a gratifying degree of media attention, and even my most space-agnostic neighbors were asking me about what exactly they were looking at. For those of us who track exoplanet research, it’s gratifying to see how quickly JWST has begun to yield results on planets around other stars. Thus WASP-96 b, 1150 light years out in the southern constellation Phoenix, a lightweight puffball planet scorched by its star.

Maybe ‘lightweight’ isn’t the best word. Jupiter is roughly 320 Earth masses, and WASP-96b weighs in at less than half that, but its tight orbit (0.04 AU, or almost ten times closer to its Sun-like star than Mercury) has puffed its diameter up to 1.2 times that of Jupiter. This is a 3.5-day orbit producing temperatures above 800 ℃.

As you would imagine, this transiting world is made to order for analysis of its atmosphere. To follow JWST’s future work, we’ll need to start learning new acronyms, the first of them being the telescope’s NIRISS, for Near-Infrared Imager and Slitless Spectrograph. NIRISS was a contribution to the mission from the Canadian Space Agency. The instrument measured light from the WASP-96 system for 6.4 hours on June 21.

Parsing the constituents of an atmosphere involves taking a transmission spectrum, which examines the light of a star as it filters through a transiting planet’s atmosphere. This can then be compared to the light of the star when no transit is occurring. As specific wavelengths of light are absorbed during the transit, atmospheric gasses can be identified. Moreover, scientists can gain information about the atmosphere’s temperature based on the height of peaks in the absorption pattern, while the spectrum’s overall shape can flag the presence of haze and clouds.

These NIRISS observations captured 280 individual spectra detected in a wavelength range from 0.6 microns to 2.8 microns, thus taking us from red into the near infrared. Even with a relatively large object like a gas giant, the actual blockage of starlight is minute, here ranging from 1.36 percent to 1.47 percent. As the image below reveals, the results show the huge promise of the instrument as we move through JWST’s Cycle 1 observations, nearly a quarter of which are to be devoted to exoplanet investigation. 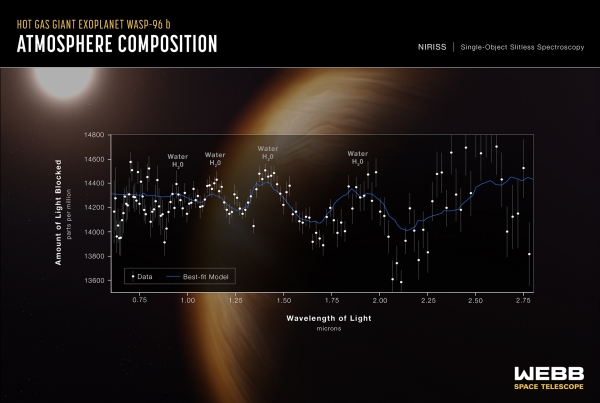 Image: A transmission spectrum is made by comparing starlight filtered through a planet’s atmosphere as it moves across the star, to the unfiltered starlight detected when the planet is beside the star. Each of the 141 data points (white circles) on this graph represents the amount of a specific wavelength of light that is blocked by the planet and absorbed by its atmosphere. The gray lines extending above and below each data point are error bars that show the uncertainty of each measurement, or the reasonable range of actual possible values. For a single observation, the error on these measurements is remarkably small. The blue line is a best-fit model that takes into account the data, the known properties of WASP-96 b and its star (e.g., size, mass, temperature), and assumed characteristics of the atmosphere. Credit: NASA, ESA, CSA, and STScI.

No more detailed infrared transmission spectrum has even been taken of an exoplanet, and this is the first that includes wavelengths longer than 1.6 microns at such resolution, as well as the first to cover the entire frequency range from 0.6 to 2.8 microns simultaneously. Here we can detect water vapor and infer the presence of clouds, as well as finding evidence for haze in the shape of the slope at the left of the spectrum. Peak heights can be used to deduce an atmospheric temperature of about 725 ℃.

Moving into wavelengths longer than 1.6 microns gives scientists a part of the spectrum that is made to order for the detection of water, oxygen, methane and carbon dioxide, all of which are expected to be found in other exoplanets observed by the instrument, and a portion of the spectrum not available from predecessor instruments. All this bodes well for what JWST will have to offer as it widens its exoplanet observations. 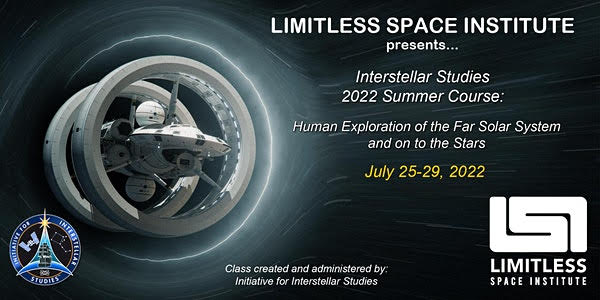