Interstellar Deceleration: Can We Ride the ‘Bow Shock’?

But let’s think about the heliosphere’s boundaries from the standpoint of incoming spacecraft. Because deceleration at the destination system is a huge problem for starship mission planning. A future crew, human or robotic, could deploy a solar sail to slow down, but a magsail seems better, as its effects kick in earlier on the approach. Looking at the image below, however, suggests another possibility, one using the interactions between stars and the interstellar medium to assist the slowdown. And then the question arises: Does our own Sun produce a similar kind of bow shock? 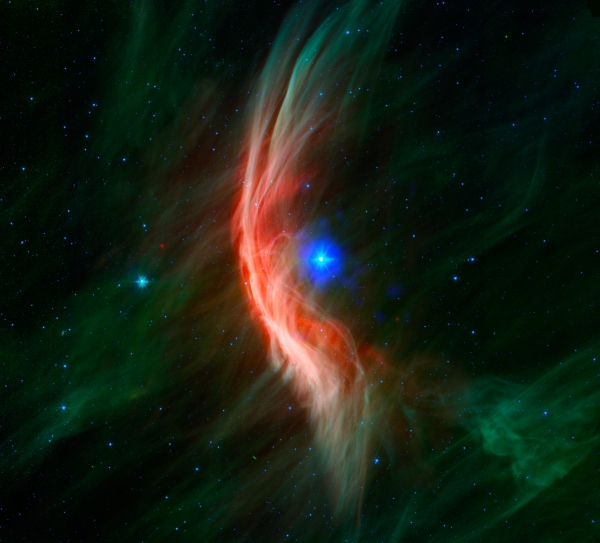 Here we’re looking at a star, Zeta Ophiuchi, that is some 440 light years from Earth. It’s about 20 times as massive as the Sun, and evidently was once in a tight orbit around another star that became a supernova perhaps a million years ago. As a result, Zeta Ophiuchi was ejected from its binary orbit, and we have data from the Spitzer Space Telescope as well as the Chandra X-ray Observatory depicting the spectacular after-effects. The shock wave consists of matter blowing away from the star’s surface, slamming into gas. In the above image, the shock wave is in vivid red and green.

The latest work on Zeta Ophiuchi comes from a team led by Samuel Green (Dublin Institute for Advanced Studies, Ireland), with a paper laying out computer modeling of the shock wave and running the data against observational data obtained at X-ray, optical, infrared and radio wavelengths. Their results are interesting, as what can be found in data on the X-ray emissions shows that it is brighter than the modeling suggests. The bubble of X-ray emissions shows up in blue around the star in the image above. Its brightness indicates further modeling including turbulence and particle acceleration is needed.

I’ll send you to the paper for more on Zeta Ophiuchi, whose position – enveloped by the nebula Sh2-27 and pushing through dense dust clouds – makes it a natural for studying what happens when a shock wave develops. But let’s cut back to more mundane interactions, such as what happens when the Sun’s solar wind encounters the interstellar medium. Does a bow shock form here? Depending on the relative velocity of the heliosphere and the strength of the local interstellar magnetic field, such a phenomenon may or may not occur, as suggested by Voyager data as well as earlier findings from the Interstellar Boundary Explorer spacecraft (IBEX). A bow shock had been assumed, but we’re learning that these interactions are complicated.

While we investigate our heliosphere’s interactions with the interstellar medium, we can point to numerous bow shocks especially associated with more massive stars. In fact, a citizen science effort called The Milky Way Project is all about mapping bow shocks, building our catalog of these interesting astrophysical features. Learning more about how bow shocks form will clearly take us into the influence of interstellar magnetic fields as they roil the outflowing stellar winds they encounter. The density and pressures of the medium and the speed of the star’s astrosphere determine the result. 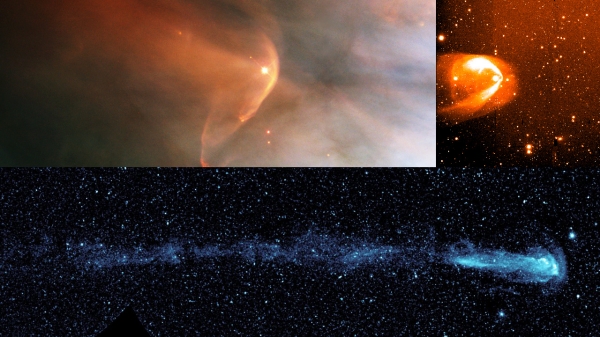 Image: Stars travel through the galaxy surrounded by a bubble of charged gas and magnetic fields, rounded at the front and trailing into a long tail behind. The bubble is called an astrosphere, or — in the case of the one around our Sun — a heliosphere. This image shows a few examples of astrospheres that are very strong and therefore visible.
Credit: NASA/Goddard Space Flight Center.

All of this has implications for our thinking about certain kinds of interstellar missions. If a star does form a bumper of plasma and higher density gas at the edge of its astrosphere, then as Gregory Benford has suggested (in correspondence some years back), we are looking at an obvious place to slow down an incoming starship. As Benford noted, the bow shock produces 3D structures, surfaces within which one can move while shedding speed, perhaps braking via a magsail. Each star would produce its own unique deceleration environment, allowing us to brake where possible along the bow shock, the astropause (cognate to the heliopause) and the termination shock.

We are talking about long, spiraling approaches to a destination system with continual magsail braking – decelerating from interstellar velocities is not going to be fast or easy. But it seems clear that one kind of precursor mission before we send missions that are more than flybys to other stars will be to visit our own shock environment at the edge of the Solar System, where we can learn more about using shock surfaces to slow down. I like the way Benford put it in an email: “As a starship approaches a star, sensing the shock structures will be like having a good eye for the tides, currents and reefs of a harbor.” For more, see 2012’s Starship Surfing: Ride the Bow Shock, where I assumed the existence of a solar bow shock.

All of this reminds us that the interstellar medium is anything but uniform. If the Sun is currently near the boundary of the Local Interstellar Cloud (and its exact position within it is unclear), the Alpha Centauri stars appear to be outside that cloud in the direction of the G cloud, another variation in the medium. So we have another kind of boundary crossing to consider. Different hydrogen densities play havoc with the Bussard ramjet concept, too. Robert Bussard assumed hydrogen densities in the range of 1 hydrogen atom per cubic centimeter, but move outside denser clouds and that figure should drop precipitously. If you’re flying an interstellar ramjet, pay attention to the clouds!

Next post: Ross 508 b: What We Can Learn from a Red Dwarf Super-Earth