Ross 508 b: What We Can Learn from a Red Dwarf Super-Earth

The discovery of a super-Earth around the M-dwarf Ross 508 gives us an interesting new world close to, if not sometimes within, the inner edge of the star’s habitable zone. This is noteworthy not simply because of the inherent interest of the planet, but because the method used to detect it was Doppler spectroscopy. In other words, radial velocity methods in which we study shifts in the spectrum of the star are here being applied to a late M-dwarf that emits most of its energies in the near-infrared (NIR).

I usually think about transits in relation to M-dwarf planets, because our space-based observatories, from CoRoT to Kepler and now TESS, have demonstrated the power of these techniques in finding exoplanets. M-dwarfs are made to order for transits because they’re small enough to offer deep transits – the signature of the planet in the star’s lightcurve is more pronounced than a transit across a larger star.

From a radial velocity perspective, planets in an M-dwarf habitable zone orbit the star closely, making for a strong RV signal if we can detect it. But there are limitations to both methods: Transit searches have clustered around younger red dwarfs that are relatively more massive. In terms of radial velocity, most exoplanet surveys have employed optical CCDs, whereas older, more evolved M-dwarfs are brighter in the near-infrared (NIR). From an exoplanet perspective, then, it can be said that cool late M-dwarfs remain largely unexplored terrain, a situation that is now being addressed.

What is needed for this kind of work is a spectrograph specifically designed for NIR wavelengths, and in fact NIR spectrographs have begun to appear, some of which involve projects we’ve looked at here, as for example CARMENES (Calar Alto high-Resolution search for M dwarfs with Exoearths with Near-infrared and optical Echelle Spectrographs). Other such projects, like SPIROU (SPectropolarimetre InfraROUge) and HPF (Habitable Planet Finder) also employ NIR spectrographs.

The most famous of the M-dwarf planets is, of course, Proxima Centauri b, found by the team led by Guillem Anglada-Escudé using visible light spectroscopy, but M-dwarfs with temperatures below the roughly 3000 K of Proxima Centauri, which are considered late-type M-dwarfs, have not been systematically searched for planets.

Consider this: Seen from 30 light years out, the Sun is a 5th magnitude object in visible light, but a 3rd magnitude target in infrared. A late-type red dwarf comes in at around 19th magnitude in visible light, but brightens to 11th magnitude in the infrared. We’ve found dozens of exoplanets around stars with effective temperature higher than 3,000 K, but only a handful around cooler M-dwarfs. The authors of the discovery paper on Ross 508 b are not exaggerating when they describe the detection of planets around such stars using high-precision radial velocity methods as “a frontier in exoplanet exploration.” Their paper serves as a helpful introduction to NIR spectroscopy.

The team, led by Hiroki Harakawa (NAOJ Subaru Telescope, Hawaii), reports on the Ross 508 work as the beginning of a campaign exploring low-temperature stars with the Subaru Telescope IRD (InfraRed Doppler) instrument, which the Astrobiology Center of Japan, where it was developed, describes as the first high-precision infrared spectrograph for 8-meter class telescopes. The observing program now underway is the IRD Subaru Strategic Program (IRD-SSP), which began in 2019 and scans late-type M-dwarfs. Stable red dwarfs with low surface activity are the targets.

Radial velocity is the detection of stellar wobbles that can be indicated in several ways, making finding planets a matter of excluding false-positives as much as locating candidates. Because M-dwarfs are prone to violent flare activity, they’re problematic thanks to the changes in surface brightness they produce. A false planetary signature like this has to be extracted and then subtracted from the signature of a possible planet. Ross 508 b holds up to the scrutiny, indicating a minimum mass about four times that of Earth at an average distance of 0.05 AU from the star.

There are indications that the planet’s orbit is elliptical, with an orbital period of about 11 days, part of which may include crossing into and back out of the habitable zone. An interesting consequence of studying late-type M-dwarfs is that their presumed lower levels of flare activity may offer a planetary environment more conducive for life than their younger cousins, with a surface less frequently bathed in flare-induced radiation. I hasten to add that this is a tentative conclusion still the subject of active study.

In any case, a planet like Ross 508 b may well turn out to be a target for atmospheric analysis once we’re able to image it directly, probably with the coming generation of 30-meter class telescopes. Transits are unlikely here, so we’re reliant on imaging rather than transmission spectroscopy, which analyzes planetary atmospheres by studying the star’s light as it filters through the atmosphere during transit events.

We should be hearing a lot more from the IRD-SSP project. Lead author Hiroki Harakawa has this to say:

“Ross 508 b is the first successful detection of a super-Earth using only near-infrared spectroscopy. Prior to this, in the detection of low-mass planets such as super-Earths, near-infrared observations alone were not accurate enough, and verification by high-precision line-of-sight velocity measurements in visible light was necessary. This study shows that IRD-SSP alone is capable of detecting planets, and clearly demonstrates the advantage of IRD-SSP in its ability to search with a high precision even for late-type red dwarfs that are too faint to be observed with visible light.” 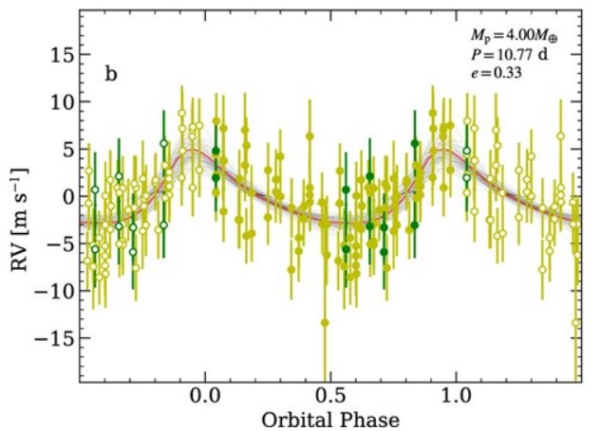 Image: Periodic variation in the line-of-sight velocity of the star Ross 508 observed by IRD. It is wrapped around the orbital period of the planet Ross 508 b (10.77 days). The change in the line-of-sight velocity of Ross 508 is less than 4 meters per second, indicating that IRD captured a very small wobble that is slower than a person running. The red curve is the best fit to the observations and its deviation from a sinusoidal curve indicates that the planet’s orbit is most likely elliptical. Credit: Harakawa et al. 2022.

The authors are interested in the question of eccentricity, pointing out that it may offer early clues to the planet’s origin, although it will take further radial velocity measurements to clarify just how eccentric this orbit is. The paper examines four different scenarios to explain the RV data, but none of these constrain the eccentricity conclusively. From the paper:

…there remains the possibility that Ross 508 b is in a high-eccentricity orbit. In a multiple-planet system, migrated planets experience giant impacts or are trapped in a resonant chain (e.g., Ogihara & Ida 2009; Izidoro et al. 2017). Planetary eccentricities are excited by giant impacts. The eccentricity of a planet can be also excited by gravitational interactions between neighboring planets or secular perturbations from a (sub)stellar companion on a wider orbit. The confirmation of a long-term RV trend will help disentangle the formation history of the super-Earth Ross 508 b.

It’s also far too early to make any statements about this planet’s habitability. For one thing, the inner edge of the habitable zone at Ross 508 is not well understood, depending as it does on the star’s luminosity, which in turn is affected by its low metallicity. It does appear that the planet is near the runaway greenhouse limit. But our knowledge of super-Earth habitability is nascent. Climate, plate tectonics, and other potent factors would play a role that we won’t be able to measure until we can start taking atmospheric measurements with next generation telescopes.

Ross 508 b is one of the faintest, lowest-mass stars with a planet detected through radial velocity. Its discovery points to the need for a large telescope and a high precision spectrograph in the near infrared to analyze the planetary systems around this kind of star. We should be learning a great deal more about late M-dwarfs as we press on with projects like the IRD Subaru Strategic Program, coupling near infrared RV work with transit observations from space and ground-based observatories.

The paper is Harakawa et al., “A Super-Earth Orbiting Near the Inner Edge of the Habitable Zone around the M4.5-dwarf Ross 508,” Publications of the Astronomical Society of Japan 30 June 2022 (full text).

Previous post: Interstellar Deceleration: Can We Ride the ‘Bow Shock’?