I was getting ready to start writing a story with implications for brown dwarfs and the galaxy’s ‘thick disk’ (as opposed to its ‘thin disk,’ about which more in a moment) when I ran across the artwork below. This is the work of French artist and astronomer Étienne Léopold Trouvelot (1827-1895), whose careful astronomical observations were rendered into illustrations and pastel drawings in the era before astrophotography. I learned from Maria Popova’s The Marginalian that Trouvelot produced 50 scientific papers, but almost 7000 works of art based on what he saw. Thus the study of part of the Milky Way below, evidently created somewhere between 1874 and 1876. 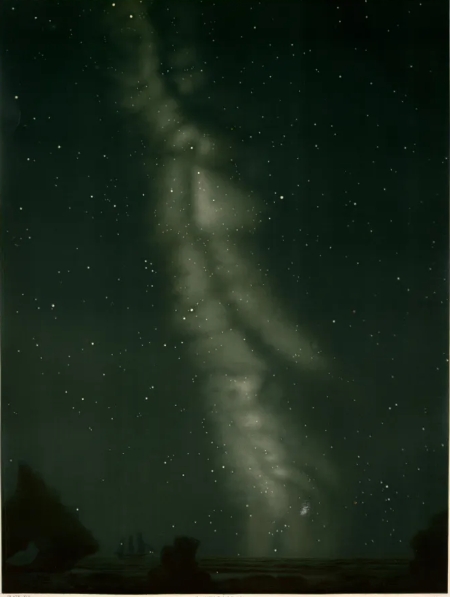 Trouvelot’s work caught the attention of the director of the Harvard Observatory, who invited him to join its staff in 1872. The concept of his art was to get across to those without the privilege of seeing these objects through a telescope just how they looked to a trained scientist. He przed the value of human rendering over instrumentation, as in this passage from the introduction to The Trouvelot Astronomical Drawings Manual, published in 1882:

Although photography renders valuable assistance to the astronomer in the case of the Sun and Moon … for other subjects, its products are in general so blurred and indistinct that no details of any great value can be secured. A well-trained eye alone is capable of seizing the delicate details of structure and of configuration of the heavenly bodies, which are liable to be affected, and even rendered invisible, by the slightest changes in our atmosphere.

Thus the view from the 1870s. These days we explore the deep sky without the flourishes of a human pen through exquisite imagery from our Earth-based telescopes and space instruments like Hubble and JWST. But I always like to learn more about the development of our views of the cosmos, and wanted to introduce Centauri Dreams readers to a figure I only learned about over the weekend. I notice that Maria Popova is producing high-quality prints of some of Trouvelot’s work, with the proceeds benefiting an attempt to build a public observatory in New York City. A worthy project; I’m sure Trouvelot would have approved.

Brown Dwarfs and the Thick Disk

JWST’s early imaging has already proven stunning, and the discoveries mount. Today we look at a small object called GLASS-JWST-BD1, a member of that subclass of brown dwarfs known as T dwarfs. These are difficult objects to detect, with temperatures between 500 and 1500 K, and thus useful for exploring the boundary between star and planet when we can find them. What is exciting here is the demonstration of what JWST can do as we push outward in our observations of stars that cannot ignite hydrogen fusion, looking now into more distant parts of the galactic disk.

Objects like this emit primarily at infrared wavelengths. Their inherent faintness has meant that when we do surveys of brown dwarfs, we are working largely with brown dwarfs within 100 parsecs (326 light years) or less of the Sun. That has made it difficult to find such objects in the galaxy’s ‘thick disk,’ which consists of largely metal-poor stars rising well above the galactic plane. Surveys using the Hubble telescope’s WFC3 instrument have pushed detection further out but JWST’s results change the game. 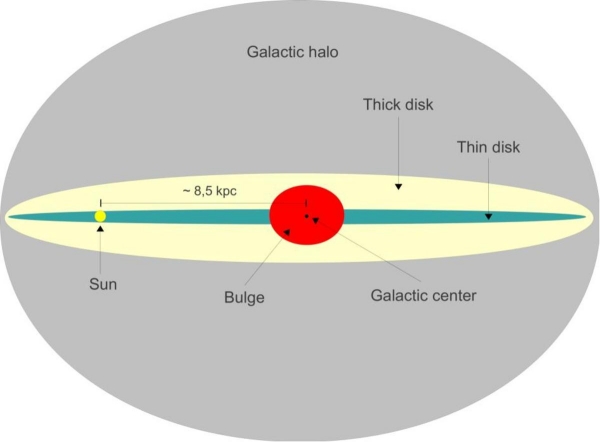 Image: Edge on diagram of the Milky Way with several structures indicated (not to scale). The thick disk is shown in light yellow. Credit: Wikimedia Commons (CC BY-SA 3.0).

Indeed, the discovery paper puts the matter this way with reference to Hubble:

…these surveys are restricted to wavelengths < 2 μm, limiting their sensitivity to the reddest and coldest brown dwarfs. The James Webb Space Telescope (JWST) represents a major step forward in the detection of cool and distant brown dwarfs, with imaging and spectroscopy extending to ∼ 5μm and providing orders of magnitude greater sensitivity than Spitzer. 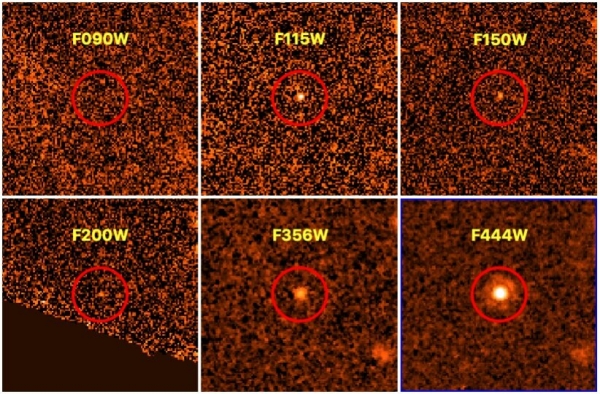 The work was led by Mario Nonino of the Astronomical Observatory of Trieste in Italy. GLASS-JWST-BD1 is between 1850 and 2350 light years from the Sun in a direction perpendicular to the galactic plane. Its mass is calculated at 31.43 Jupiter masses, with an effective temperature of 600 K. Its age is estimated at 5 billion years.

The discovery was made with JWST’s Near-Infrared Spectrograph (NIRSPEC) and Near-Infrared Imager and Slitless Spectrograph (NIRISS). We only have about 400 known T dwarfs to date, but it’s clear that JWST will expand the catalog substantially. What we’re seeing here is that JWST is able to probe out into the galactic thick disk to find objects that are small and faint, meaning that the study of brown dwarfs, their metallicity and the evolution of their atmospheres, will be considerably enhanced.

From an entirely different dataset comes brown dwarf news from the citizen science project Backyard Worlds: Planet 9, which has just announced the discovery of 34 binary star systems where a brown dwarf is a companion object to a white dwarf. Citizen scientist Frank Kiwy is in fact listed as lead author of the paper on these discoveries that appears in The Astronomical Journal. Kiwy’s work involved data mining within a database of 4 billion objects in in the NOIRLab Source Catalog DR2.

We have a long way to go in learning how common brown dwarf companions to stars are, but these are objects that merit attention for what they can tell us about atmospheres both stellar and planetary. Brown dwarf atmospheres contain interesting molecules and offer hints to the development of planetary atmospheres in gas giants.

Moreover, have you looked at the numbers of some of these citizen scientist projects lately? Backyard Worlds: Planet 9 has a network encompassing over 100,000 volunteers who scan telescope images to search for features that machine learning algorithms may miss. The binary systems Kiwy found were among a far larger group of 2500 potential ultracool brown dwarfs that appear in the NOIRLab data. So while JWST pushes the limits from L2, data gathering from more than 40 Earth-based instruments collected in the NOIRLab holdings is being combed by citizen volunteers.

Aaron Meisner is an astronomer at NOIRLab (National Optical-Infrared Astronomy Research Laboratory) and the co-founder of Backyard Worlds:

“These discoveries were made by an amateur astronomer who conquered astronomical big data. Modern astronomy archives contain an immense treasure trove of data and often harbor major discoveries just waiting to be noticed.”

Something tells me that Étienne Trouvelot would have liked the idea of an amateur making contributions worthy of professional publication. In any case, wouldn’t he have loved to have gotten hold of some of the views we’re seeing from JWST? It’s hard, though, to see how he could have crafted works of art more lovely than the Webb instrument’s recent deep field images. “[No] human skill,” he once admitted, “can reproduce upon paper the majestic beauty and radiance of the celestial objects.”

Nonetheless, his work is deeply attractive. Let me close with another, this one of the Orion Nebula. 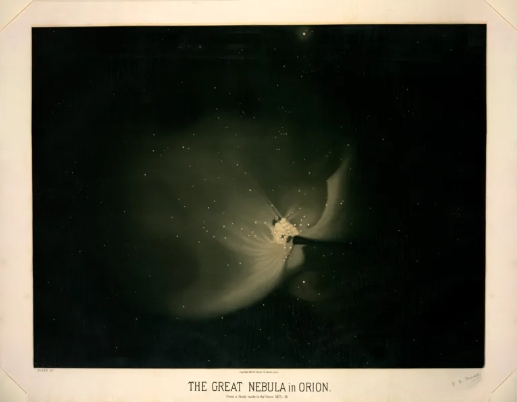 Next post: Laser Communications: A Step at a Time to Deep Space