Tuning Up for Europa

The new Jupiter photos from JWST’s Near Infrared Camera (NIRCam) are unusual, enough so that I decided to fold one into today’s post. It’s a pretty good fit because I had already put together most of the material I was going to use about Europa. It would have been an additional plus if Europa showed up in the image below, but even without it, note that we can see moons as small as Adrasta here. Imke de Pater (UC-Berkeley), who led the observations, noted that both tiny satellites and distant galaxies show up in the same image. And here’s Thierry Fouchet, a professor at the Paris Observatory, who likewise worked on the observing effort:

“This image illustrates the sensitivity and dynamic range of JWST’s NIRCam instrument. It reveals the bright waves, swirls and vortices in Jupiter’s atmosphere and simultaneously captures the dark ring system, 1 million times fainter than the planet, as well as the moons Amalthea and Adrastea, which are roughly 200 and 20 kilometers across, respectively. This one image sums up the science of our Jupiter system program, which studies the dynamics and chemistry of Jupiter itself, its rings and its satellite system.”

And yes, these images are significantly processed, in this case by citizen scientist Judy Schmidt in California and Ricardo Hueso (University of the Basque Country, Spain). Hurdo is a co-investigator on the Early Release Science program and also leads the NIRCam observations of Jupiter’s Atmosphere. I think Schmidt, who has been working with space observations for a decade, says it best when she describes her goal as “to get it to look natural, even if it’s not anything close to what your eye can see.” 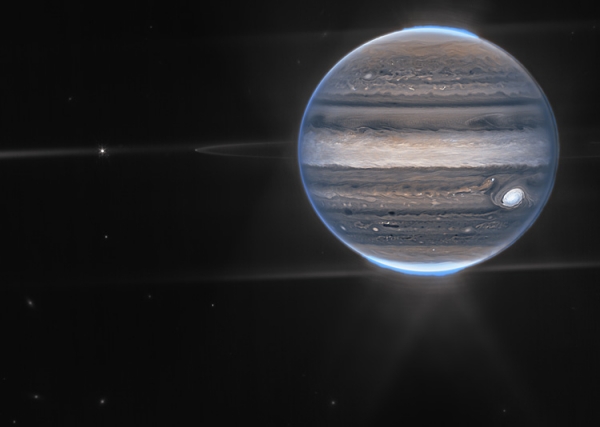 Image: This false-color composite image of Jupiter was obtained July 27 with the NIRCam instrument on board the JWST. Jupiter’s faint rings — a million times dimmer than the planet — and two of its small satellites, Amalthea (left) and Adrastea (dot at edge of ring), are clearly visible against a background of distant galaxies. The diffraction pattern created by the bright auroras and the moon Io (to the left out of the image), form a complex background of scattered light around Jupiter. (Image credit: NASA, European Space Agency, Jupiter Early Release Science team. Image processing: Ricardo Hueso [UPV/EHU] and Judy Schmidt).

I had this image on-screen this morning as I looked into progress on Europa Clipper, which is in the midst of its most significant year so far. By the end of 2022, most flight hardware and all the science instruments are expected to be installed at the Jet Propulsion Laboratory’s Spacecraft Assembly Facility. Engineers and technicians will be assembling the spacecraft’s main body in the installation’s High Bay 1. That includes installation of the craft’s science instruments as well as the aluminum electronics vault that shields the electronics from Jupiter’s radiation. Launch is currently scheduled for October, 2024. We should get nearly 50 close passes of Europa out of all this. 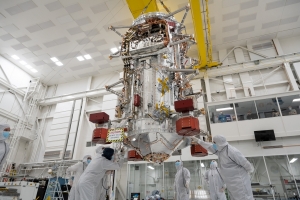 Image: Engineers and technicians use a crane to lift the core of NASA’s Europa Clipper spacecraft in the High Bay 1 clean room of JPL’s Spacecraft Assembly Facility. Credit: NASA/JPL-Caltech.

Watching a spacecraft come together is a fascinating exercise, and we’ll keep an eye on NASA’s updates on the Clipper as the process continues. Just as fascinating, though, is the continual inflow of information about what Europa Clipper’s science instruments will be looking for, a process just as critical if we are to interpret its data correctly.

On that score, what an interesting paper has recently turned up in Astrobiology. In the hands of lead author Natalie Wolfenbarger, it comes out of the University of Texas at Austin, where Europa Clipper’s radar instrument has been developed. A key issue is the composition of the moon’s ice shell, which in turn will feed our conclusions about the ocean lying beneath. Europa’s ocean has been likened to the waters beneath an Antarctic ice shelf on Earth. A good comparison?

To find out, Wolfenbarger and colleagues went to work on how water freezes under ice shelves, which takes us into two unusual terms. ‘Congelation ice’ forms under the ice shelf, while ‘frazil ice’ floats upward in the form of ice flakes in supercooled seawater. These form a kind of snow that coats the bottom of the ice shelf. Interestingly, both ice production mechanisms produce ice with less salinity than seawater itself.

In other words, we may have been assuming that Europa’s ocean is saltier than it actually is, particularly given the paper’s finding that scaling up what happens under Antarctica to an ice shell the size and age of Europa’s produces ice that is less salty still. Frazil ice in particular retains only a small fraction of seawater salt, and the authors make the case that it should be common on Europa. A less saline ice shell is significant because salinity governs its strength and the movement of heat through it. 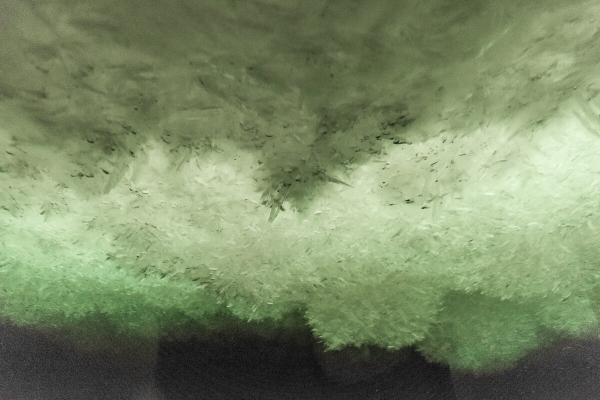 Image: Mounds of snow-like ice under an ice shelf. Credit: ©Helen Glazer 2015 from the project Walking in Antarctica.

Thus we use our own planet as a research model to understand mechanisms likely at play on a Jovian moon, in ways that help us prepare for Europa Clipper’s look via its ice penetrating instrument, which is called REASON (Radar for Europa Assessment and Sounding: Ocean to Near-surface). This is the only one of the spacecraft’s nine instruments that can look directly into the ice shell, a process that we have experience with on Earth, as REASON principal investigator Don Blankenship notes: “We’ve used ice-penetrating radar for decades. That’s how we know Earth’s ice sheets’ thickness.”

The thickness of the ice is important for everything from getting future probes through the shell into the ocean beneath to creating conditions for an ocean with more likelihood of habitable conditions. For Europa is constantly bathed in particles flung against its surface by Jupiter’s magnetic field, so that compounds emerge that would be useful to life below. A thinner ice sheet would make it more likely that these compounds enter the ocean. No wonder the thickness of the ice has been such a contentious matter among scientists, whose estimates range from a few kilometers to tens of kilometers thick.

Europa Clipper’s REASON instrument uses different wavelengths of radio waves and will be capable of penetrating the ice shell as much as 30 kilometers. This should get interesting.