Arrokoth: The Unbearable Lightness of Being

We’re in that earliest phase of interstellar exploration that is all about nudging outward from our system into the local interstellar medium. That has already involved the Voyagers, but my plan is to keep checking in on both the Interstellar Probe concept at the Johns Hopkins Applied Physics Laboratory and the SGL probe study steadily maturing at the Jet Propulsion Laboratory. These are absorbing ventures as scientists figure out ways to do propulsion, in-flight maintenance (and in the case of SGL, in-flight assembly) and data return on timescales the Voyager team wasn’t imagining when those doughty craft were launched in 1977.

Nudging outward. Let’s check in a bit with New Horizons, because here we have a Kuiper Belt explorer that is fully operational, and with instruments specifically designed for the environment it explores, now some 54 AU from the Sun. It’s striking to think that the Juno mission is ten times closer to our star than New Horizons. The Pluto/Charon flyby seems a long time ago, as does that of the KBO Arrokoth. Indeed the spacecraft is now 1.6 billion kilometers further out than Arrokoth, which it visited in 2019.

Meanwhile the pace of analysis has been intense, with more than 65 publications from the New Horizons science team making their way into the literature last year alone. Have a look at Arrokoth as visualized from recent analysis and realize that data from the encounter continue to stream back to Earth even now. In fact, as New Horizons begins its second extended mission on October 1, completing the data transfer is among the priorities, according to principal investigator Alan Stern in his latest PI’s Perspective. 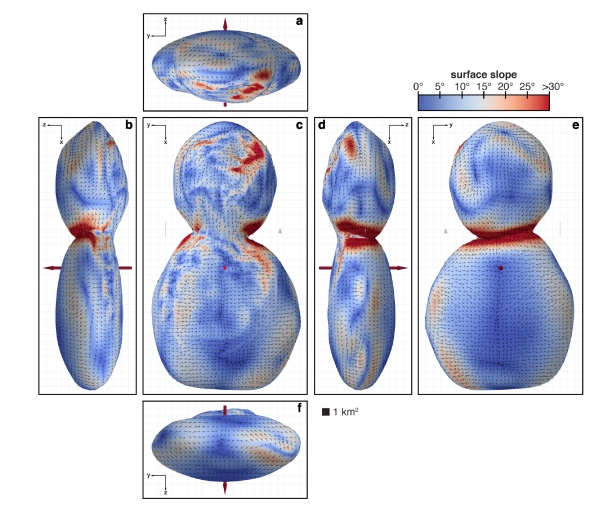 Image: Recently published discoveries from New Horizons have run the gamut across astrophysics, heliophysics and planetary science. This image is one of many geophysical data products resulting from New Horizons’ 2019 flight past Arrokoth, the first and (so far) only Kuiper Belt object explored by spacecraft, It shows surface slopes on Arrokoth derived from New Horizons stereo imagery, and illustrates one important aspect to understanding both the origin and the geological evolution of Arrokoth. Credit: From a paper led by James Tuttle Keane in the June 2022 issue of Journal of Geophysical Research (JGR) Planets (citation below).

The illustration above is from a recent paper in which lead author James Keane (JPL) and colleagues delve into the peanut-shaped Arrokoth, which the authors point out is probably the least evolved object ever explored by a spacecraft. The paper takes on the ambitious challenge of figuring out the object’s gravity field, noting that bright material seems to collect in its lowest locations. New Horizons was not able to measure Arrokoth’s density directly, but the latter can be inferred using methods that have been fine-tuned in the study of asteroids and comets. It turns out to be unusually low.

The authors describe Arrokoth as akin to fluffy snow on Earth, making it one of the lowest density objects ever explored. It’s intriguing to see that there are comparisons between Arrokoth and some of the smallest moons found within Saturn’s rings. From the paper:

The only objects in the Solar System with consistently low, Arrokoth-like, measured densities are Saturn’s ring moons. These small worlds are thought to form from the gentle accretion of icy ring particles—which may not be unlike the formation of planetesimals via streaming instability and other processes in the early Kuiper Belt, although this comparison requires more investigation.

A useful analogue indeed, if it can be shown that a ring system that Cassini has already provided huge amounts of data on can illuminate processes from the earliest days of the Solar System. The paper continues:

Expanded models of ring and planetesimal dynamics may partially support testing this hypothesis, as could continued analysis of Cassini data. New, ultra-high-resolution observations of dense rings around gas giants (like those proposed by the Saturn Ring Skimmer mission concept; Tiscareno et al., 2021) may be particularly illustrative of how these small, low-density worlds form and evolve.

Let’s pause for a moment on Saturn Ring Skimmer, which comes out of an effort led by Matthew S. Tiscareno (SETI Institute) and has been submitted to the 2023 Planetary Science Decadal Survey. The mission is described as a “ballistic tour” that makes repeated low altitude passes over Saturn’s main rings in a span of 162 days without the use of propellant, covering the main ring regions in 13 low-altitude flybys. The authors of the white paper on the idea say that Saturn Ring Skimmer would get 100 times closer to the ring system than Cassini when its best ring images were taken, and would be able to measure material surrounding the rings in situ.

Image: This is Figure 1 from the paper on Ring Skimmer. Caption: Polar plot (left) illustrating 13 passes over Saturn’s rings corresponding to the 162-day long prototype ballistic tour; the altitude (middle) and relative velocity (right) curves represent the passes over the rings. The black solid lines on the left panel represent the region of the rings shadowed by the Sun and, thus, in eclipse. This ring-skimming trajectory is ballistic and exploits four Titan gravity assists. For reference, the ring passes are color coded and grouped by Titan flybys. Figure from Vaquero et al. (2019).

So we have one possibility for augmenting even our Cassini data with measurements that may shed light on the New Horizons findings at Arrokoth. Out of the exhaustive analysis in the Keane paper, we begin to build a picture of Kuiper Belt Objects assembling gently in the outer Solar System, probably within the first few million years of its formation. The New Horizons extended mission should also be able to help if suitable targets can be found. As of now, 24 KBO systems have density constraints, all of these determined by studying multiple object systems (other than Triton, which is most likely a KBO that was captured). Returning to the Keane paper:

Arrokoth is a much smaller object than these other characterized KBOs (it is the smallest KBO with an inferred density). All other characterized KBOs are binary or multiple systems with individual components at least 3× larger than Arrokoth. It is widely recognized that KBO densities decrease with decreasing size, however it is unclear how far that trend goes (and it clearly cannot go to zero density at zero size). Without a more complete sample, it is unclear if Arrokoth’s inferred low density is (a) representative of other small KBOs, (b) an outlier, or (c) simply incorrect due to some flawed assumption(s) used in inferring its density.

So we have a lot to learn. The authors point out how many questions emerge from the Arrokoth flyby. To understand KBO densities, we need further density analysis of comets (only 67P/Churyumov-Gerasimenko has precise density measurements). For that matter, we need more information about KBO binaries and their rotation and orbital dynamics, a thought that Arrokoth emphasizes because there is close alignment between its two lobes. Did two tidally locked objects slowly spiral together before merging? Finding a KBO binary ahead would be pure gold for New Horizons as we try to refine our understanding of the evolution of these objects.

The possibility of another KBO flyby is enhanced by the fact that New Horizons has about 11 kilograms of fuel onboard, though finding an object within range is a daunting task. Both Gemini South (Chile) and the Subaru telescope in Hawaii are looking for a target now, aided by new machine learning tools recently developed. Says Stern:

…by the time New Horizons emerges from hibernation at the beginning of March, we’ll be deep into planning observations of new, much more distant KBOs, as well as a look back at distant Uranus and Neptune to observe how these two “ice giant” planets reflect sunlight – which will tell us more about what drives their internal energy balance. We also plan to make the most extensive and sensitive studies of the cosmological visible light and ultraviolet light backgrounds ever made; such measurements constrain origin theories of the universe while shedding new light on the total number of galaxies in the universe.

Flybys make the news, while much of the essential data gathering proceeds quietly and relatively behind the scenes, which is why I focus on it here. Now in hibernation, New Horizons has until next spring in a relatively quiescent state, though as Stern points out, the Venetia Burney Student Dust Counter (SDC) as well as the PEPSSI and SWAP charged-particle plasma spectrometers remain active. The second priority of the extended mission is collecting and archiving data on the Kuiper Belt environment and also looking outward to the interactions between the heliosphere and the interstellar medium. The plan is to continue these observations while creating the first all-sky ultraviolet maps of the heliosphere, as well as studying clouds in the interstellar medium.