As the Europlanet Science Congress (EPSC) has just wrapped up in Spain’s Palacio de Congresos de Granada, I’m reminded how little time I’ve had recently to keep up with such gatherings. I do hope to have some entries on EPSC-announced findings in the near future. Today I simply note the news of an unexpected ‘heat wave’ (700℃) extending 130,000 kilometers just below Jupiter’s northern aurora, one traveling at high speed toward the equator, as announced by James O’Donoghue at the EPSC.

“While the auroras continuously deliver heat to the rest of the planet, these heat wave ‘events’ represent an additional, significant energy source. These findings add to our knowledge of Jupiter’s upper-atmospheric weather and climate, and are a great help in trying to solve the ‘energy crisis’ problem that plagues research into the giant planets.”

I mention this work in particular because of my interest in the EPSC results but also because Jupiter has been on my mind thanks to the Juno mission extension. The spacecraft will now remain in operation in Jupiter space through September of 2025, becoming an explorer of the moon system here. Specifically, multiple rendezvous are planned for Ganymede, Europa and Io, even as the spacecraft continues magnetic field studies and radio occultation science. The extended mission will also take multiple passages through the planet’s thin system of rings. 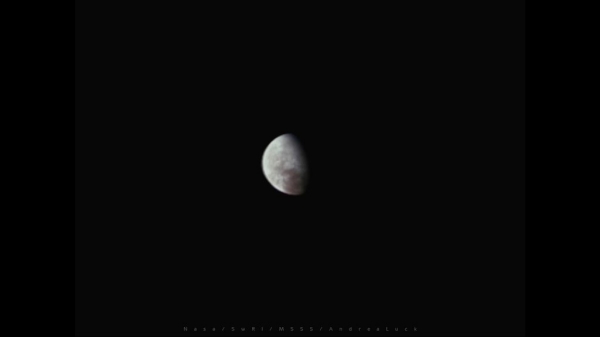 Image: A far more distant encounter with Europa than the one about to happen. This image from the spacecraft’s JunoCam was taken at a distance of about 82,000 kilometers. Color and reflectance variations across Europa’s regions can be seen Although the resolution of the images is just 50 to 60 km per pixel, the data fills in a previously un-imaged area around the north pole near the center of the image. Credit: NASA/JPL-Caltech/SwRI/MSSS. Image processing: Andrea Luck CC BY.

The words ‘previously un-imaged’ have a nice resonance, reminding us how reliant we have been on the Galileo dataset for Europa surface studies. As Juno’s orbit evolves, the spacecraft continues to investigate this system from new angles, with perijove (closest approach to Jupiter) migrating northward over the course of the mission, allowing for example close views of cyclones at Jupiter’s northern poles. Note the beautiful gravitational ballet going on here, as multiple satellite flybys steer our spacecraft through the Jupiter system and reduce its orbital period.

But my attention is drawn primarily to the implications for Europa Clipper and JUICE (Jupiter Icy Moons Explorer), and not just because of the close observations of icy moon surfaces that the Juno orbits will allow. Note this: During the course of these investigations, Juno will fly through the Europa and Io ring tori. These are ring shaped clouds of ions whose characterization will assist planning as Europa Clipper and JUICE controllers anticipate the radiation environment near the large icy moons.

Obviously, the more we can learn about the radiation situation we’ll face near Europa, the better for conducting operations around that intriguing world. Juno’s icy moon encounters have already begun, with a low-altitude flyby of Ganymede in June of 2021. Gravitational interactions there have in turn set up the close flyby of Europa we can expect in just a few days, on September 29, which will be followed by close approaches of Io, one on December 30 of 2023, the next on February 3 of 2024.

The upcoming Europa flyby will reduce Juno’s orbit around Jupiter from 43 to 38 days, and will represent the closest a NASA spacecraft has approached Europa since the days of the Galileo probe. The latter came within 351 kilometers of the moon back in 2000, and we’ve been examining that precious data ever since as we investigate the moon’s surface looking for clues about the ocean underneath. Now we’ll come within 358 kilometers while collecting high-resolution images of portions of the surface.

If passage through the ring tori will be valuable for future missions, so will the additional data on Europa’s ionosphere and its interactions with Jupiter’s magnetosphere help us understand more about this world and its intriguing interior. Juno will throw every science instrument and sensor it has into the effort, from the Jovian Auroral Distributions Experiment (JADE) to its X-band medium-gain radio antenna. The Jupiter Energetic-Particle Detector Instrument (JEDI) and Magnetometer will collect information about the ionosphere and plasma environment.

Moreover, Juno’s Microwave Radiometer (MWR) should return data on the icy crust. And for the visually oriented (which probably means all of us), JunoCam will take four visible light images that should be helpful in finding any changes in surface features since Galileo. Expect a resolution better than 1 kilometer per pixel. We’ll also get a high-resolution black-and-white image from Juno’s star camera, while the Jovian Infrared Auroral Mapper (JIRAM) will take infrared images of the surface.

Data collection is to begin about an hour before closest approach, with the spacecraft still over 80,000 kilometers from Europa. That makes for a swift flyby indeed. John Bordi is Juno deputy mission manager at the Jet Propulsion Laboratory:

“The relative velocity between spacecraft and moon will be 14.7 miles per second (23.6 kilometers per second), so we are screaming by pretty fast. All steps have to go like clockwork to successfully acquire our planned data, because soon after the flyby is complete, the spacecraft needs to be reoriented for our upcoming close approach of Jupiter, which happens only 7½ hours later.”

Image: Juno’s extended mission includes flybys of the moons Ganymede, Europa, and Io. This graphic depicts the spacecraft’s orbits of Jupiter – labeled “PJ” for perijove, or point of closest approach to the planet – from its prime mission in gray to the 42 orbits of its extended mission in shades of blue and purple. Credit: NASA/JPL-Caltech/SwRI.

Nearly 50 Europa flybys are on tap from Europa Clipper, while JUICE will add several more as the spacecraft adjusts its trajectory enroute to extended orbital operations at Ganymede. Oh for faster propulsion! It takes a long time to get to Jupiter with today’s methods, but the early 2030s should be a harvest of information about the small world that seems to be the Solar System’s most likely place for life as we don’t know it.

Previous post: The Decision Rests with You! The Day the Earth Stood Still, Seven Decades Later