Colors of a Habitable Exoplanet

When it comes to planetary habitability, it is all too easy to let our assumptions slide past without review. It’s a danger to be avoided if we want to understand what may distinguish various types of habitable worlds. That’s the implication of a presentation at the recent Europlanet Science Congress (EPSC), which finished its work on September 23 at the Palacio de Congresos de Granada (Spain). Tilman Spohn (International Space Science Institute) and Dennis Höning (Potsdam Institute for Climate Impact Research) have been investigating the ratio of land to ocean and the evolution of biospheres.

The assumptions the duo are examining revolve around the kind of habitable world our Earth represents. Our planet draws on solar energy through continents balanced against large oceans that produce abundant rainfall. Would a given exoplanet have similar geological properties? According to the scientists, it is a balance between the emergence of continents and the volcanism and continental erosion of subduction that maintains Earth’s particular ratio of ocean to land. If we assume a similar internal state on an exoplanet, we could wind up with a similar equilibrium between the production of continents and their erosion, producing a continental land fraction like Earth’s. 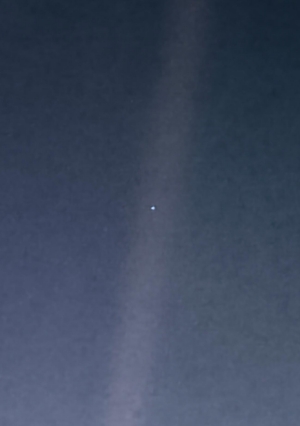 But this is conjecture, not observation, and Spohn and Höning believe that several different outcomes may be produced depending on the coupling of continental crust cycle and water in the mantle. We might well wind up with a ‘land planet,’ one having 80 percent of its surface in the form of continental crust (that makes for about 70 percent land surface when continental shelves covered with water are accounted for).

At the other extreme is a planet only 20 percent or so covered in continents; here the land fraction is about 10 percent. Both worlds maintain equilibrium, and it’s rather startling that 80 percent of the team’s randomly chosen sets of initial conditions end up with the land planet outcome.

Image: Planet Earth is visible as a bright speck within the sunbeam just right of center and appears softly blue in the famous ‘pale blue dot’ image originally published in 1990. This updated version uses modern image-processing software and techniques to revisit the well-known Voyager view while attempting to respect the original data and intent of those who planned the images. Earth is the famous ‘pale blue dot,’ but would other habitable planets present the same aspect? Credit: NASA/JPL-Caltech.

Earth-like planets (with continental coverage in the range of about 40 percent, or a land fraction of 30 percent) result in only one percent of these evolutionary models, suggesting that the kind of equilibrium we see on our planet is unstable. Here’s Spohn on the matter:

“In the engine of Earth’s plate tectonics, internal heat drives geologic activity, such as earthquakes, volcanoes and mountain building, and results in the growth of continents. The land’s erosion is part of a series of cycles that exchange water between the atmosphere and the interior. Our numerical models of how these cycles interact show that present-day Earth may be an exceptional planet, and that the equilibrium of landmass may be unstable over billions of years. While all the planets modeled could be considered habitable, their fauna and flora may be quite different.” 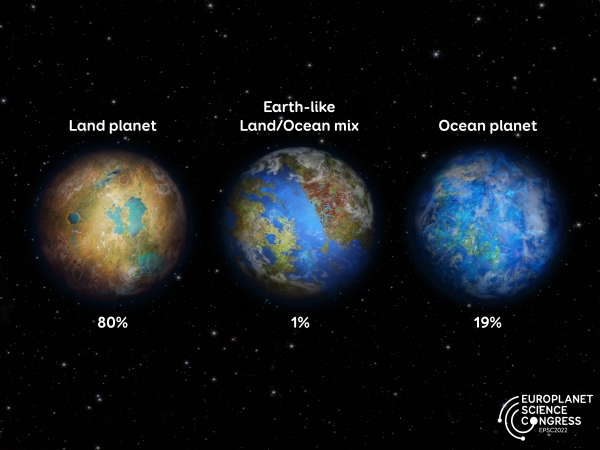 Image: Terrestrial planets can evolve in three scenarios of land/ocean distribution: covered by lands, oceans or an equal mix of both. The land-covered planet is the most probable scenario ( around 80%), while our “equal mix” Earth (<1% chance) is even more unique than previously thought. Credit: Europlanet 2024 RI/T Roger.

When the authors included CO2 outgassing in their model as well as the long-term carbonate-silicate cycle, they found only a 5 K average surface temperature difference between the land planet outcome and the ocean planet. But the scientists point out that a land planet’s climate would be considerably different from our own, accounting for the difference in flora and fauna that Spohn alludes to above: “…we would expect that the land planet has a substantially dryer, colder and harsher climate,” they write in their presentation abstract, “possibly with extended cold deserts in comparison with the ocean planet and with the present-day Earth.”

We need look no further than Earth’s geological history to see analogues. A land planet scenario produces the kind of climate that Earth would have had in the Pleistocene, while the ocean planet conditions are similar to the climate in Earth’s Paleocene. We’ll see how these numbers stack up when this work evolves out of the conference presentation stage and into a formal paper, but if they hold, the implications for habitable planet detection seem clear. We’re far more likely to find land planets and water worlds than the expected ‘pale blue dot’ signature characteristic of Earth.