Biosignatures: The Case for Nitrous Oxide

Are we overlooking a potential biosignature? A new study makes the case that nitrous oxide could be a valuable indicator of life on other worlds, and one that can be detected with current and future instrumentation. In today’s essay, Don Wilkins takes a close look at the paper. A retired aerospace engineer with thirty-five years experience in designing, developing, testing, manufacturing and deploying avionics, Don tells me he has been an avid supporter of space flight and exploration all the way back to the days of Project Mercury. Based in St. Louis, where he is an adjunct instructor of electronics at Washington University, Don holds twelve patents and is involved with the university’s efforts at increasing participation in science, technology, engineering, and math.

Biosignatures, specific signals produced by life, are the focus of intense study within the astronomical community. Gases such as nitrogen (N2), oxygen and methane are sought in planetary atmospheres as their large scale production is linked to life, although abiotic sources contribute to false positives. The James Webb Space Telescope (JWST) provides a new, powerful tool to explore the atmospheres of temperate terrestrial exoplanets in the approximately known 5,000 exoplanetary systems.

A paper by a UC Riverside, University of Maryland and NASA team led by Dr. Edward Schwieterman proposes the biosignature list expand to include nitrous oxygen (N2O), the so-called laughing gas once employed by anesthesiologists. Nitrous oxide is excluded from the current list of biosignatures. The gas, even though produced in quantity by biological processes, would be difficult to detect across interstellar ranges at current N2O concentrations in Earth’s atmosphere.

Dr. Schwieterman and his team believe the exclusion of nitrous oxide is not merited and propose several conditions where N2O could accumulate in quantities and be detected by current sensors. The paper notes that large quantities of atmospheric N2O can accumulate if:

2. The target exoplanet orbits a late K-dwarf or inactive early M dwarf, comparably low level UV emitters. The reduction rate of N2O into N2 and nitrous oxides is proportional to its exposure to UV.

3. Metal enzymatic catalysts, such as copper, are not abundant enough to partially terminate the reduction process. During the Proterozoic (approximately 2500 to 540 million years ago), high concentrations of atmospheric N2O produced by biological processes may have been present as copper catalysts were not readily available to reduce the gas.

4. The nitrous oxide reductase enzyme, the last step of the denitrification metabolism that yields fixed N2 from N2O, never evolves.

5. Phosphorous in a form suitable for biological activities is limited, although this shortage would adversely affect the possibility of life.

Dr. Schwieterman and his team examined contributors to false positives. A small amount of nitrous oxide and nitrogen dioxide (NO2) is created by lightning. The presence of NO2 is a strong indicator the N2O is produced by an abiotic source.

Another source of false positives is chemodenitrification, N2O production through abiotic reduction of nitric oxide (NOx) by ferrous iron. 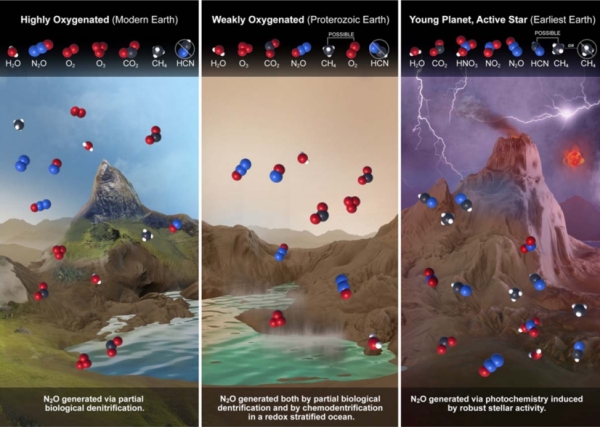 Image: This is Figure 13 from the paper. Caption: A concept image illustrating the interpretability of N2O as a biosignature in the context of the planetary environment. The left panel illustrates a scenario like the modern Earth, with a high-oxygen atmosphere and N2O generated overwhelmingly via partial biological denitrification. In this case, the simultaneous presence of O2, O3 , N2O, and CH4 indicates a strong chemical disequilibrium. The middle panel illustrates a weakly oxygenated planetary environment like the Proterozoic Earth, with N2O generated both by partial biological denitrification and by chemodenitrification of nitrogenous intermediates (likely substantially biogenic) in a redox stratified ocean. In this case, molecular oxygen (O2 ) and methane may have concentrations that are too low to detect directly, but detectable N2O and O3 would be a strong biosignature. A false positive is unlikely, because an abiotic O2 atmosphere would be unstable in combination with a reducing ocean. The right panel illustrates the most likely false-positive scenario, where an active star splits N2 via SPEs [solar proton events], resulting in photochemically produced N2O. This scenario would predict additional photochemical products, such as HCN, that would be indicative of abiotic origins. Stellar characterization would confirm the magnitude of the stellar activity. Vigorous atmospheric production of NOx species could be inferred from spectrally active NO2. Credit: Schwieterman et al.

Several candidates for a N2O search tightly orbit TRAPPIST-1 (the name is derived from Transiting Planets and Planetesimals Small Telescope, a Belgian robotic telescope at the European Southern Observatory’s installation at La Silla, Chile). An ultracool red dwarf older than Earth’s Sun, TRAPPIST-1 is a type M star, 40 light years distant from Earth. Seven rocky exoplanets are found here, likely made of materials similar to Earth – iron, oxygen, magnesium, and silicon – but these worlds are 8% less dense than Earth. This implies that the ratio between the constituent materials on the TRAPPIST-1 worlds differs from the ratio on Earth.

It is possible each of the four outer, cooler planets incorporates a large core, a mantle and a planet girding ocean. Finding N2O in the atmosphere of these worlds would be a significant clue pointing to the existence of life. 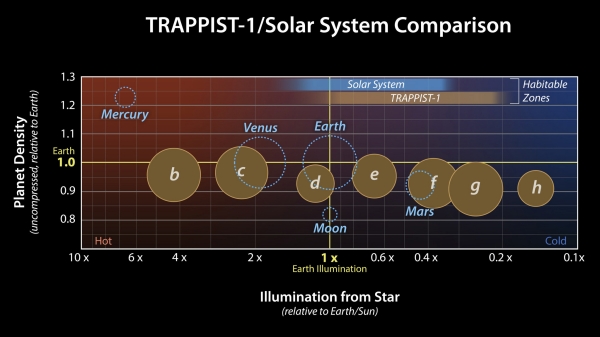 Image: A planet’s density is determined by its composition as well as its size: Gravity compresses the material a planet is made of, increasing the planet’s density. Uncompressed density adjusts for the effect of gravity and can reveal how the composition of various planets compare. Credit: NASA/JPL-Caltech.

The conditions around the four outer planets of TRAPPIST-1 appear ideal for a search for biological nitrous oxide. The authors use TRAPPIST 1e as a test case. From the paper:

We used the biogeochemical model cGENIE to inform the maximum plausible N2O fluxes for an Earthlike biosphere, which could be 1–2 orders of magnitude larger than those on present-day Earth, assuming nutrient-rich oceans and evolutionary or environmental conditions that limit the last step in the denitrification process. Even for maximal biospheric N2O fluxes of 100 Tmol yr−1, an Earthlike atmosphere will never enter an N2O runaway, but would attain much larger concentrations than those found on Earth today. We find that late K-dwarf and inactive early M-dwarf stars can maintain the highest N2O levels at any given surface flux, potentially exceeding 1000 ppm. We show that for N2O fluxes of 10–100 Tmol yr−1, JWST could detect N2O at 2.9 μm on TRAPPIST-1e within its mission lifetime.

As we look toward future instrumentation, K-dwarfs turn out to be particularly susceptible to this analysis:

Terrestrial planets orbiting K-dwarf stars are particularly appealing targets for N2O searches with future MIR [mid-IR] missions, due to favorable planet–star angular separations and because N2O fluxes of only 2 to 3 times those of Earth’s modern global average can produce N2O signatures comparable to those of O3.

However, additional research to strengthen the case for N2O as a biosignature is needed. Evaluation of the biological, geological and chemical combinations producing large quantities of N2O can determine suitable exoplanet candidates where a search for nitrous oxide will support findings of life.

Previous post: Mapping Black Holes in (and out of) the Milky Way