I’m interested in a new paper on planet formation, not only for its conclusions but its methodology. What Amy Bonsor (University of Cambridge) and colleagues are drawing from their data is how quickly planets can form. We’ve looked numerous times in these pages at core accretion models that explain the emergence of rocky worlds and gravitational instability models that may offer a way of producing a gas giant. But how long after the formation of the circumstellar disk do these classes of planets actually appear?

A planet like the Earth poses fewer challenges than a Jupiter or Saturn. Small particles run into each other within the gas and dust disk surrounding the young star, assembling planets and other debris through a process of clumping that eventually forms planetesimals that themselves interact and collide. Thus core accretion: The planet ‘grows’ in ways that are readily modeled and can be observed in disks around other stars.

But the gas giants still pose problems. Core accretion would suggest the growth of a solid core that gradually draws in mass until a dense atmosphere enshrouds it. But the core accretion process, according to the latest models, takes long enough that by the time it has finished, the disk is depleted. Gas giants are primarily made of hydrogen and helium, but these gases disappear from the disk in relatively short order. So a gas giant’s formation has to occur quickly and early, before the needed hydrogen and helium are blown off by radiation from the young star or consumed by it.

Gas giants around M-dwarfs may be one route to follow here, for core accretion seems to operate more slowly in M-dwarf systems, and we almost have to call in relatively short-order clumping – this is the disk instability model championed by Alan Boss – to explain how such worlds could form. So one observational path into gas giant formation is to look for such worlds around smaller stars, where their presence would indicate a model other than core accretion at work. But Bonsor and team have chosen an ingenious alternate route: They’re probing the atmospheres of white dwarf stars.

Bonsor points out that “[s]ome white dwarfs are amazing laboratories, because their thin atmospheres are almost like celestial graveyards.” Exactly so, because so-called ‘polluted’ white dwarfs show clear signs of heavy elements like magnesium, iron and calcium in their atmospheres, and the assumption is that these elements must be the result of small bodies within the stellar system falling into the parent star. So the method here is to use spectroscopic observations to probe the composition of asteroids that are long gone, but whose traces help us chart the conditions of their formation.

Studying the atmospheres of more than 200 polluted white dwarfs, the researchers found that the elements there can only be explained by the infall of asteroids that have undergone differentiation. In other words, they have gone through the process of melting, with iron sinking into their core while lighter elements rise to the surface. Amy Bonsor explains:

“The cause of the melting can only be attributed to very short-lived radioactive elements, which existed in the earliest stages of the planetary system but decay away in just a million years. In other words, if these asteroids were melted by something which only exists for a very brief time at the dawn of the planetary system, then the process of planet formation must kick off very quickly.” 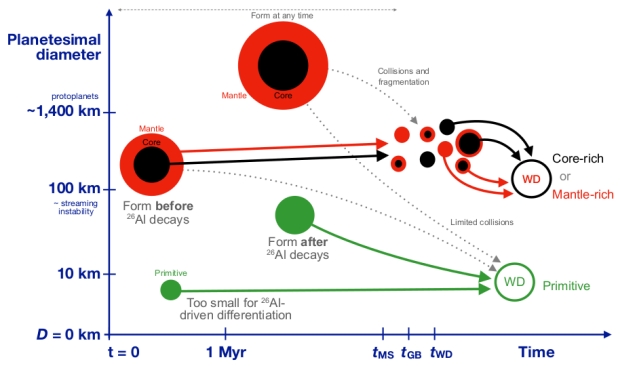 Image: This is Figure 3 from the paper. Caption: The core- or mantle-rich materials in the atmospheres of white dwarfs are the collision fragments of planetesimals that formed earlier than ∼1 Myr, when large-scale melting was fueled by the decay of 26Al. Alternatively, in the most massive, close-in, highly excited, planetesimal belts, catastrophic collisions between Pluto-sized bodies (anything with D > 1, 400 km) could supply most smaller planetesimals. Gravitational potential energy during accretion can fuel large-scale melting and core formation in these large bodies, such that almost all planetary bodies in the belt are the collision fragments of core–mantle differentiated bodies. tMS , tGB and tWD refer to the star’s main-sequence, giant branch lifetimes and the start of the white dwarf phase. Credit: Bonsor et al.

The researchers’ simulations of planetesimal and collisional evolution show that short-lived radioactive nuclides like Aluminium-26 (26Al) are the most likely heat source to explain the accreted iron core or mantle material. From the paper:

The need for enhanced abundances of 26Al to explain core- or mantle-rich white dwarf spectra provides distinct evidence for the early formation of planetesimals in exoplanetary systems contemporaneously with star formation. Rapid planetesimal formation offers an explanation for the difference in mass budgets between Class 0, I and II discs [6]. Our findings point to the growth of large, > 10 km-sized planetesimals, potentially even planetary cores, rather than just the coagulation of pebbles. The earlier planetary cores form, the more likely they are to grow to the pebble isolation mass and the more likely giant planet formation is to occur early-on, which can provide an explanation for substructures commonly observed with ALMA.

Early planet formation helps explain how gas giant planets form and seems to put pressure on gravitational instability models, although there may be multiple routes to the same result. But it is striking that the researchers, who include scientists at Oxford, the Ludwig-Maximilians-Universität in Munich, the University of Groningen and the Max Planck Institute for Solar System Research, Gottingen, find evidence for the early formation of planetesimals “contemporaneously with star formation.”

Thus star and planet formation begin concurrently, under this model, with planets evolving during the collapse of the circumstellar disk. I’ve always found white dwarfs fascinating, but that we might probe the origins of stellar systems by analyzing the composition of their atmospheres is remarkable. It points to the continuing vitality of work on this class of star for understanding both planetary and stellar evolution.

Next post: KOBE: The Hunt for Habitable Zone K-dwarf Planets