Although I often see the exoplanet WASP-39b referred to as a ‘hot Saturn,’ and sometimes a ‘hot Jupiter,’ the terms don’t really compute. This is a world closer to Saturn than Jupiter in mass, but with a radius somewhat larger than that of Jupiter. Hugging its G-class primary in a seven million kilometer orbit, it completes a circuit every four days. The system is about 700 light years from us in Virgo, and to my mind WASP-39b is a salutary reminder that we can carry analogies to the Solar System only so far.

Because we have nothing in our system that remotely compares to WASP-39b. Let’s celebrate the fact that in this exoplanet we have the opportunity to study a different kind of planet, and remind ourselves of how many worlds we’re finding that are not represented by our own familiar categories. I imagine one day we’ll have more descriptive names for what we now call, by analogy, ‘super-Earths’ and ‘sub-Neptunes’ as well.

I’ve seen WASP-39b referred to in the literature as a ‘highly inflated’ planet, which is an apt description. This is a transiting world, one that has been the subject of numerous studies that have produced insights into giant planet atmospheres under extreme conditions through the spectroscopic study of light from the star as it filters through the planet’s gaseous envelope. Even before the James Webb Space Telescope became available, we had learned a lot about its composition.

Now JWST data take our understanding to an entirely new level. Both the Hubble and Spitzer space observatories have gone to work on WASP-39b in recent years, finding interesting ingredients in an atmosphere that reaches 900 ℃. What we have from JWST, as revealed in a set of five just released scientific papers, is a wide range of atoms and molecules that provides signs of active chemistry and even cloud activity. JWST’s NIRSpec (Near-Infrared Spectrograph), NIRCam (Near Infrared Camera ) and NIRISS (Near Infrared Imager and Slitless Spectrograph) all produced data in this work. 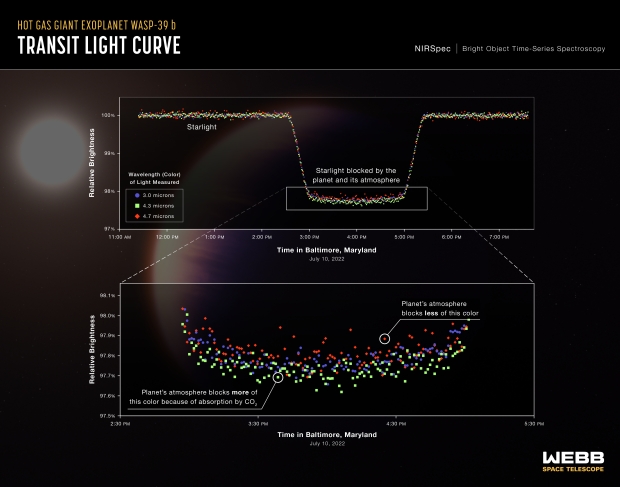 An international team is behind the set of new papers, with hundreds of scientists analyzing the data. Although carbon dioxide had been found in pre-JWST observations, it appears in the new data at higher resolution, even as sodium, potassium and water vapor detections confirmed earlier findings from other instruments. Methane and hydrogen sulfide do not appear. We also have the first detection in an exoplanet atmosphere of sulfur dioxide, produced from chemical reactions to the star’s light.

Thus we learn of a role for photochemistry in the atmosphere of a star-hugging gas giant. Natalie Batalha is an astronomer at UC-Santa Cruz who was deeply involved in the new WASP-39B observational effort:

“We observed the exoplanet with multiple instruments that, together, provide a broad swath of the infrared spectrum and a panoply of chemical fingerprints inaccessible until JWST. Data like these are a game changer.”

The sulfur dioxide detection is worth pausing on, as it may offer insights into planet formation. The passage below is from Shang-Min Tsai et al., one of the five papers now available in preprint form:

The accessibility of sulphur species in exoplanet atmospheres through the aid of photochemistry allows for a new window into planet formation processes, whereas in the Solar System gas giants, the temperature is sufficiently low that sulphur is condensed out as either H2S clouds or together with NH3 as ammonium hydrosulphide (NH4SH) clouds making it more difficult to observe. Sulphur has been detected in protoplanetary discs where it may be primarily in refractory form. As such, sulphur may not undergo the level of processing inherent in the evolution of more volatile species, making it a preferred reference element when tracing the formation history of solar system objects through analysis of elemental ratios. Such efforts for warm giant exoplanets are now a possibility thanks to the observability of photochemically produced SO2. The improved constraints on bulk planetary metallicity provided by the observable SO2 feature further provides information on planet formation histories such as the accretion of solid material. 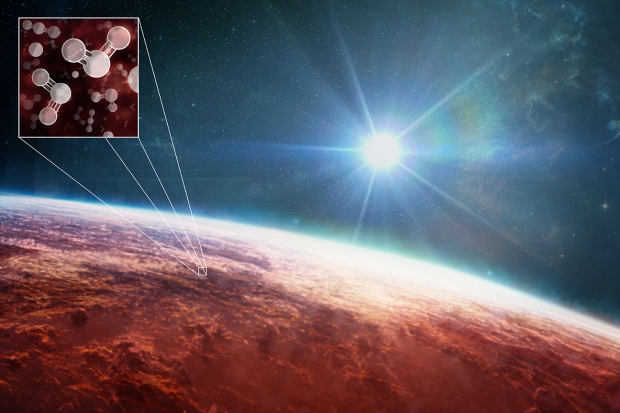 Image: New observations of WASP-39b with the JWST have provided a clearer picture of the exoplanet, showing the presence of sodium, potassium, water, carbon dioxide, carbon monoxide and sulfur dioxide in the planet’s atmosphere. This artist’s illustration also displays newly detected patches of clouds scattered across the planet. Credit: Melissa Weiss/Center for Astrophysics | Harvard & Smithsonian.

All this is excellent news as we ponder the implications for JWST’s capabilities in relation to small, terrestrial worlds. The work is part of a program called Director’s Discretionary-Early Release Science (DD-ERS), which is designed to help the scientific community quickly get up to speed with the capabilities of the new instrument. Judging from these results, we can expect a string of new insights into nearby exoplanetary systems. Just what will JWST uncover, for example, in the TRAPPIST-1 system?