I keep an eye on recent findings about Europa because fine-tuning procedures for the science that missions like Europa Clipper and JUICE (Jupiter Icy Moons Explorer) will perform at the Jovian moon is an ongoing process that doesn’t stop at launch. The more we learn now – the more anomalies we uncover or processes we begin to glimpse – the better able we’ll be to adjust spacecraft observing strategies to go after the answers to these phenomena. A new study teaches us a bit more about Europa’s plate tectonics, the only solid evidence of tectonics we know of other than Earth’s. And it will take new high-resolution imagery to confirm the theories put forth within it.

Appearing in the Journal of Geophysical Research: Planets, the paper looks at the processes that evidently govern the evolution of the fractured Europan surface the Galileo mission revealed to us back in the 1990s. What’s intriguing here is the identification of Europan tectonic plates in the context of deep time. If a tectonic plate shows a broad continuity, it is bounded by surface discontinuities. The authors show that a sequence can be established based on how discontinuities cut through surface features, and we can begin to make statements about how the surface changes. 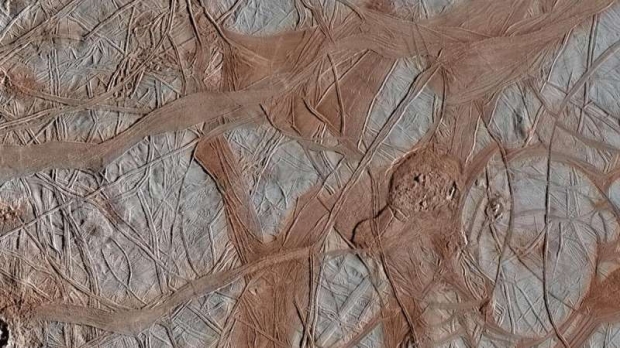 Image: A complex pattern of ridges and bands named Arachne Linea is seen in this false-color image of Europa’s surface taken by the Galileo spacecraft on 26 September 1998. New research shows that this landscape was formed by the jostling of nearby tectonic plates. Credit: NASA/JPL-Caltech/SETI Institute.

The work, led by Geoffrey Collins (Wheaton College, MA), looks at three areas on Europa – spread out in terms of latitude so as to include the high northern and southern latitudes as well as the equatorial areas – to reconstruct what they would have looked like before surface plates moved. It’s fascinating to contrast the findings with what we see on Earth, because on Europa tectonic movement is scattered, with some areas showing no plates at all. That reveals a regional process in which plate travel distance can be less than 100 kilometers. Plate tectonics, in other words, occurs only in limited areas on Europa, covers only a small degree of motion across the surface, and only appears to operate intermittently. It does not appear to be happening now, at least in the areas the paper surveys.

I come back to Europa Clipper, the mission that should benefit from this analysis, for although we’ve studied plate tectonics on Europa before, the work has been hampered by lack of imaging data at high enough resolution to attain a widespread view. The authors argue that the improved imaging from missions like Clipper and JUICE will detect many more areas with plate-like motions to add to their three examples. This should highlight the fact that while Earth’s tectonic plates form a global system, Europa’s are sharply confined in a process that is likely local or regional.

Note the stop-and-start aspect of plate movement, as discussed in the paper (italics mine):

In all of the study areas, young ridges and ridge complexes overprint the plate boundaries. The young ridges do not accommodate offsets like those seen in the plate boundaries. Thus, whatever process was driving the plate motions came to an end, and is not actively driving plate motions today in any of the areas studied. The relationship between the Castalia Macula study area and the older Belus area to its north… demonstrates that the plate tectonic-like behavior on Europa did not occur all at the same time. Combined with the previous conclusion, we develop the view that plate tectonic-like behavior on Europa occurs in regional patches and turns on and off at different times in different places. 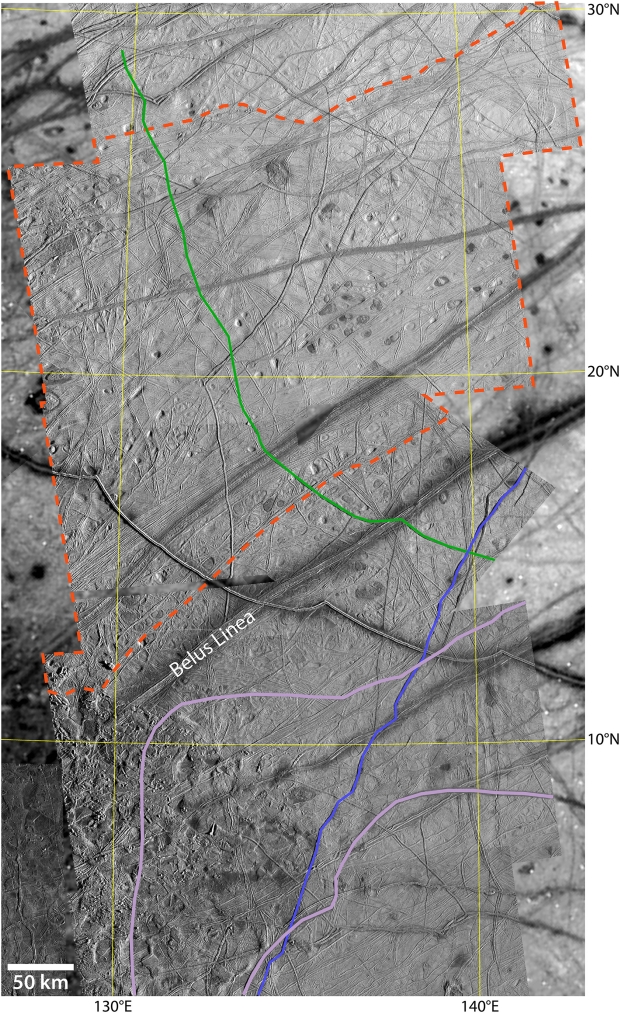 Image: This is Figure 19 from the paper, illustrating tectonic change over time. Caption: An area exhibiting plate-like motions north of Belus Linea is outlined by a red dashed line. The purple lines in the south are plate boundaries CM2 and CM4 from the Castalia Macula reconstruction… The blue line shows a ridge that is crosscut by CM2 and CM4, and extends all the way south to be crosscut by Acacallis Linea (off the southern edge of this figure). The Blue Ridge crosscuts the green ridge, which crosscuts all of the candidate plate boundaries in the area north of Belus. This shows that all of the plate-like activity in the area north of Belus is older than the activity in the Castalia Macula study area. Orthographic projection centered at 15°N, 135°E. Credit: Collins et al.

The study of these three areas of Europa implies that something stops plate motion from persisting and spreading, possibly because of the nature of the surface material or else the mechanism that forces plate motions in the first place. Here’s an interesting point that has further ramifications for future observations by our spacecraft: Is convergence – where surface material is lost and pre-existing terrain must be reconstructed – always apparent from the limited data we have available? We’ll need plenty of high resolution imagery from future spacecraft to make the call on that.

There is much for Europa Clipper to examine in terms of how tectonics functions here, not the least of which is the question of what drives the plate motions thus far observed on Europa. If plate tectonics is indeed as sharply limited as this study implies, just what is it that forces a plate movement and then apparently shuts it down?

And in terms of that ever-fascinating ocean below the ice, is surface material drawn in large quantities into the ice shell, and are there times when the lower crust or ocean is exposed while the plate motion occurs? Reconstructing plate motions is an open investigation with serious implications for habitability. Europa Clipper and the JUICE mission should give us data that sharply refine our modeling of surface and ocean.