The idea that life on Earth came from somewhere else has intrigued me since I first ran into it in Fred Hoyle’s work back in the 1980s. I already knew of Hoyle because, if memory serves, his novel The Black Cloud (William Heinemann Ltd, 1957) was the first science fiction novel I ever read. Someone brought it to my grade school and we passed the copy around to the point where by the time I got it, the paperback was battered though intact. Its cover remains a fine memory. I remember being ingenious about appearing to be reading an arithmetic text in class while actually reading the Hoyle novel. 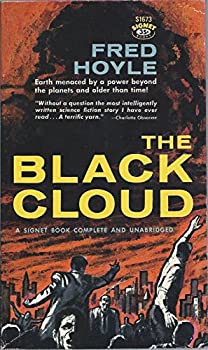 In the book, the approach of a cloud of dust and gas in the Solar System occasions alarm, with projections of the end of photosynthesis as the Sun’s light is blocked. Even more alarming are the unexpected movements of the cloud once it arrives, which suggest that it is no inanimate object but a kind of organism.

I’ve been meaning to re-read The Black Cloud for years and this post energizes me to do just that, though this time around the old paperback will have to give way to a Kindle, as I had to pass the original back to its owner for continued circulation, after which it disappeared.

But back to panspermia. As the novel shows, Hoyle was interested not just in the nature of consciousness but likewise the matrix in which it can be embedded. By the 1980s, working with a former doctoral student named Chandra Wickramasinghe (Cardiff University), he was suggesting that dense molecular clouds could contain biochemistry, possibly concentrated in the volatiles of comets in their trillions. The notion that the inside of a comet could have become the source for life on Earth led the duo to propose that space-borne clouds might even evolve bacteria, which they explored in a 1979 book called Diseases from Space, an idea that was widely dismissed.

But leaving bacteria born in space aside, the idea that life can move between planets continues to intrigue scientists. We have, after all, objects on Earth that have fallen from the sky and turn out to have been the result of impacts on Mars. So if we can move past the question of life’s origin and focus instead on life’s propagation, panspermia takes on new life. Abiogenesis may be operational on the early Earth, but perhaps incoming materials from comets or other planets had their own unique role to play. Life in this case is not an either/or proposition but a combination of factors.

Be aware of a special issue of Astrobiology (citation below) which delves into these matters, with ten essays by the likes of Paul Davies, Fred Adams, Charles Lineweaver, as well as Avi Loeb and Ben Zuckerman, who from their own perspectives tackle the question of ‘Oumuamua as a technological object rather than a comet. The latter discussion reminds us that the discovery of interstellar comets moving through our Solar System widens the panspermia debate. Now we’re talking about the potential transfer of materials not just between planets but between stellar systems.

If panspermia does operate, meaning that life can survive space journeys lasting perhaps millions of years, then we might begin to speak of a common molecular basis for the living things we would expect to find widely in the universe. Paul Davies and Peter Worden point this out in their introduction to the special collection, noting that this view contrasts enormously with the more common view that life emerges on its own wherever suitable conditions can be found. In both cases, the implication is for a cosmos filled with life, but only panspermia argues for its natural spread between worlds.

The key word there is ‘natural.’ If panspermia does not occur via natural processes, what about the possibility of ‘directed panspermia,’ in which a civilization makes the decision to use technology to spread life as a matter of policy? It startled me in reading through these essays to realize that Francis Crick and the British chemist Leslie Orgel had proposed as far back as 1973 in a paper in Icarus that we investigate present-day organisms to see whether we can find “any vestigial traces” of extraterrestrial origins. Their paper offers this startling finish:

Are the senders or their descendants still alive? Has their star inexorably warmed up and frizzled them, or were they able to colonise a different Solar System with a short-range spaceship? Have they perhaps destroyed themselves, either by too much aggression or too little? The difficulties of placing any form of life on another planetary system are so great that we are unlikely to be their sole descendants. Presumably they would have made many attempts to infect the galaxy. If the range of their rockets were small this might suggest that we have cousins on planets which are not too distant. Perhaps the galaxy is lifeless except for a local village, of which we are one member.

I like that word ‘frizzled.’ It even gets past the spell-check!

We’ve looked at proposals for directed panspermia before in these pages, as for example in Robert Buckalew’s Engineered Exogenesis: Nature’s Model for Interstellar Colonization and my entry Directed Panspermia: Seeding the Galaxy, which focuses on Michael Mautner and Greg Matloff’s ideas on spreading life in the cosmos. Next time I want to dig into an essay from the new Astrobiology collection by Christopher McKay, Paul Davies and Simon Worden on the question of how we might use interstellar comets of the sort we now believe to be common to spread life in the galaxy.

A key question: Why would we want to do this? Or more precisely, how would we go about deciding whether spreading life into the cosmos is an ethical thing to do?