A Role for Comets in Europa’s Ocean?

The role comets may play in the formation of life seems to be much in the news these days. Following our look at interstellar comets as a possibly deliberate way to spread life in the cosmos, I ran across a paper from Evan Carnahan (University of Texas at Austin) and colleagues (at JPL, Williams College as well as UT-Austin) that studies the surface of Europa with an eye toward explaining how impact features may evolve.

Craters could be cometary in origin and need not necessarily penetrate completely through the ice, for the team’s simulations of ice deformation show drainage into the ocean below from much smaller events. Here comets as well as asteroids come into play as impactors, their role being not as carriers of life per se but as mechanisms for mixing already existing materials from the surface into the ocean. 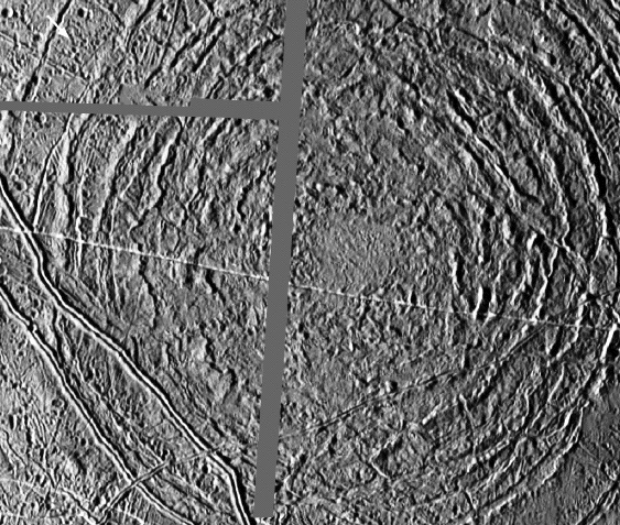 That, of course, gets the attention, for getting surface oxidants produced by solar irradiation through the ice has been a challenge to the idea of a fecund Europan ocean. The matter has been studied before, with observational evidence for processes like subduction, where an ice surface moves below an adjacent sheet, and features that could be interpreted as brine drainage, where melting occurs near the surface, although this requires an energy source that has not yet been determined. But many craters show features suggestive of frozen meltwater and post-impact movement of meltwater beneath the crater.

The Carnahan paper notes, too, how many previous studies have been done on impacts that penetrate the ice shell and directly reach the ocean, which would move astrobiologically interesting materials into it, but while impacts would have been common in the history of the icy moon, the bulk of these may not have been penetrating. Much depends upon the thickness of the ice, and on that score we await data from future missions like Europa Clipper and JUICE to probe more deeply. Current thinking seems to be coalescing around the idea that the ice is tens of kilometers thick.

The authors believe that impacts need not fully penetrate the ice to have interesting effects. Such impacts should produce melt chambers, some of them of considerable size, allowing heated meltwater to then sink through the ice remaining below them. This meltwater mechanism copes with a thick ice shell and does not require that it actually be penetrated to mix surface ingredients with the water below. The observational evidence can support this, not only on Europa but elsewhere. Implicit in the discussion is the idea that the ice surrounding a melt chamber is not rigid. From the paper: 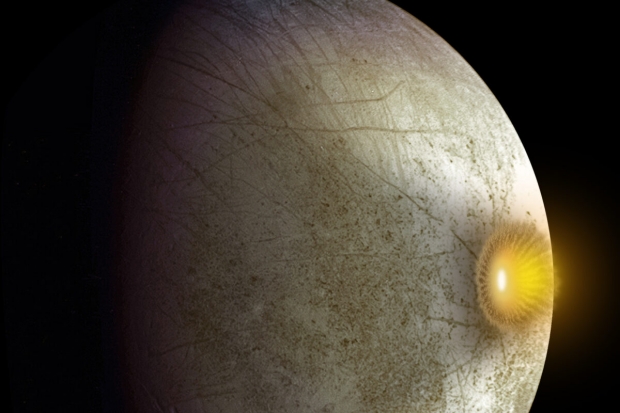 Image: An artist’s concept of a comet or asteroid impact on Jupiter’s moon Europa. Credit: NASA/JPL-Caltech.

The method here is to deploy mathematical simulations to study the evolution of these melt chambers on Europa. The term is ‘foundering,’ which is the movement of meltwater through the ice as it potentially transports oxidants below. If surface ice can be transferred into the ocean in a sustained way, and thus not just through massive impacts but through a range of smaller ones, the chances of developing interesting biology below only increase. The work also implies that Europa’s so-called ‘chaos’ terrain, which some have explained as the result of meltwater near the surface, may have other origins, for in this model most of the meltwater does not remain near the surface. Says Carnahan: “We’re cautioning against the idea that you could maintain very large volumes of melt in the shallow subsurface without it sinking.”

The researchers modeled comet and asteroid impacts using a shock-physics cratering simulation and massaged the output by factoring in both the sinking of dense meltwater and its refreezing within the ice shell. The modeling required analysis of the energies involved as well as the deformation of the surface ice after impact. UT’s Carnahan developed the ice shell convection model that the authors extended to match the geometry of surface impact simulations and subsequent changes in the ice.

The conclusions are striking:

Our simulations show that impacts that generate significant melt chambers lead to substantial post-impact viscous deformation due to the foundering of the impact melts. If the transient cavity depth of the impact exceeds half the ice shell thickness the impact melt drains into the underlying ocean and forms a continuous surface-to-ocean porous column. Foundering of impact melts leads to mixing within the ice shell and the transfer of melt volumes on the order of tens of cubic kilometers from the surface of Europa to the ocean.

Image: A computer-generated simulation of the post-impact melt chamber of Manannan Crater, an impact crater on Europa. The simulation shows the melt water sinking to the ocean within several hundred years after impact. Credit: Carnahan et al.

So we have a way to get surface materials through to the Europan ocean, a method that because it does not require large impacts, has likely been widespread throughout Europa’s history. It’s interesting to speculate on how this process could leave evidence beyond what we’ve already uncovered in the craters visible on the surface and what corroboration in support of the analysis Europa Clipper and JUICE may be able to provide. Other icy worlds come to mind here as well, with the authors mentioning Titan as a place where even an exceedingly thick ice shell may still be susceptible to exchanging material with the surface.

Given how little we know about abiogenesis, it’s conceivable not only that life might develop under Europan ice, but that icy moons elsewhere in the Solar System may hold far more life in the aggregate than exists in what we view as the habitable zone. If that is the case, then the argument that life is ubiquitous in the universe receives strong support, but it will take a lot of hard exploration to find out, a process of discovery whose next steps via Europa Clipper and JUICE will represent only a beginning.

Next post: Chasing nomadic worlds: Opening up the space between the stars