Gathering the Evidence for Life on Enceladus

With a proposal for an Enceladus Orbilander mission in the works at the Johns Hopkins Applied Physics Laboratory, I continue to mull over the prospects for investigating this interesting moon. Something is producing methane in the ocean under the Enceladus ice shell, analyzed in a 2021 paper from Antonin Affholder (now at the University of Arizona) and colleagues, using Cassini data from passages through the plumes erupting from the southern polar regions. The scientists produced mathematical models and used a Bayesian analysis to weigh the probabilities that the methane is being created by life or through abiotic processes.

The result: The plume data are consistent with both possibilities, although it’s interesting, based on what we know about hydrothermal chemistry on earth, that the amount of methane is higher than would be expected through any abiotic explanation. So we can’t rule out the possibility of some kind of microorganisms under the ice on Enceladus, and clearly need data from a future mission to make the call. I won’t go any further into the 2021 paper (citation below) other than to note that the authors believe their methods may be useful for dealing with future chemical data from exoplanets of a wide variety, and not just icy worlds with an ocean beneath a surface shell.

Now a new paper has been published in The Planetary Science Journal, authored by the same team and addressing the potential of such a future mission. A saltwater ocean outgassing methane is an ideal astrobiological target, and one useful result of the new analysis is that it would not take a landing on Enceladus itself to probe whether or not life exists there. Says co-author Régis Ferrière (University of Arizona):

“Clearly, sending a robot crawling through ice cracks and deep-diving down to the seafloor would not be easy. By simulating the data that a more prepared and advanced orbiting spacecraft would gather from just the plumes alone, our team has now shown that this approach would be enough to confidently determine whether or not there is life within Enceladus’ ocean without actually having to probe the depths of the moon. This is a thrilling perspective.” 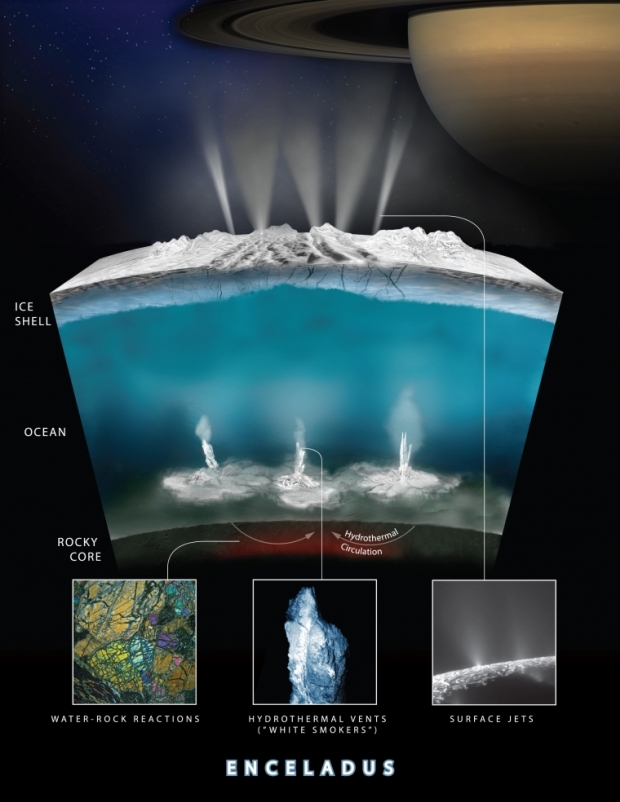 Microbes on Earth – methanogens – find ways to thrive around hydrothermal vents deep below the surface of the oceans, in regions deprived of sunlight but rich in the energy stored in chemical compounds. Indeed, life around ‘white smoker’ vents is rich and not limited to microbes, with dihydrogen and carbon dioxide as an energy source in a process that releases methane as a byproduct. The researchers hypothesize that similar processes are at work on Enceladus, calculating the possible total mass of life there, and the likelihood that cells from that life might be ejected by the plumes.

The team’s model produces a small and sparse biosphere, one amounting to no more than the biomass of a single whale in the moon’s ocean. That’s an interesting finding in itself in contrast to some earlier studies, and it contrasts strongly with the size of the biosphere around Earth’s hydrothermal vents. But the quantity is sufficient to produce enough organic molecules that a future spacecraft could detect them by flying through the plumes. The mission would require multiple plume flybys.

Actual cells are unlikely to be found in the plumes, but detected organic molecules including particular amino acids would support the idea of active biology. Even so, we are probably going to be left without a definitive answer, adds Ferrière:

“Considering that according to the calculations, any life present on Enceladus would be extremely sparse, there still is a good chance that we’ll never find enough organic molecules in the plumes to unambiguously conclude that it is there. So, rather than focusing on the question of how much is enough to prove that life is there, we asked, ‘What is the maximum amount of organic material that could be present in the absence of life?'”

An Enceladus orbiter, in other words, would produce strong evidence of life if its measurements were above the threshold identified here. Back to the JHU/APL Enceladus Orbilander, thoroughly described in a concept study available online. The mission includes both orbital operations as well as a landing on the surface, with thirteen science instruments aboard to probe for life in both venues. The mission would measure pH, temperature, salinity and availability of nutrients in the ocean as well as making radar and seismic measurements to probe the structure of the ice crust. 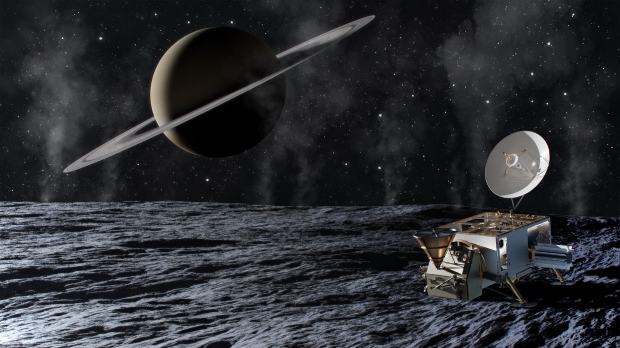 Here the chances of finding cell material are much higher than in purely orbital operations, where survival through the outgassing process of plume creation seems unlikely. The lander would target a flat space free of boulders at the moon’s south pole with the aim of collecting plume materials that have fallen back to the surface. The team points out that the largest particles would not reach altitudes high enough for sampling from orbit, making the lander our best chance for a definitive answer.

The paper, indeed, points to this conclusion:

…cell-like abiotic structures (abiotic biomorphs) that may form in hydrothermal environments could cause a high risk of a false positive… Assuming that cells can be identified unambiguously…, we find that the volume of plume material that needs to be collected to confidently sample at least one cell might require a large number of fly-throughs in the plume, or using a lander to collect plume particles falling on Enceladus’s surface (e.g., the Enceladus Orbilander; MacKenzie et al. 2021).

Next post: SunVoyager: A Fast Fusion Mission Beyond the Heliosphere

Previous post: Chasing nomadic worlds: Opening up the space between the stars