SunVoyager: A Fast Fusion Mission Beyond the Heliosphere

1000 AU makes a fine target for our next push past the heliosphere, keeping in mind that good science is to be had all along the way. Thus if we took 100 years to get to 1000 AU (and at Voyager speeds it would be a lot longer than that), we would still be gathering solid data about the Kuiper Belt, the heliosphere itself and its interactions with the interstellar medium, the nature and disposition of interstellar dust, and the plasma environment any future interstellar craft will have to pass through.

We don’t have to get there fast to produce useful results, in other words, but it sure would help. The Thousand Astronomical Unit mission (TAU) was examined by NASA in the 1980s using nuclear electric propulsion technologies, one specification being the need to reach the target distance within 50 years. It’s interesting to me – and Kelvin Long discusses this in a new paper we’ll examine in the next few posts – that a large part of the science case for TAU was stellar parallax, for classical measurements at Earth – Sun distance allow only coarse-grained estimates of stellar distances. We’d like to increase the baseline of our space-based interferometer, and the way to do that is to reach beyond the system.

Gravitational lensing wasn’t on the mind of mission planners in the 1980s, although the concept was being examined as a long-range possibility by von Eshleman at Stanford as early as 1979, with intense follow-up scrutiny by Italian space scientist Claudio Maccone. Today reaching the 550 AU distance where gravitational lensing effects enable observation of exoplanets is much on the mind of Slava Turyshev and team at JPL, whose refined mission concept is aimed at the upcoming heliophysics decadal. We’ve examined this Solar Gravity Lens mission on various occasions in these pages, as well as JHU/APL’s Interstellar Probe design, whose long-range goal is 1000 AU. 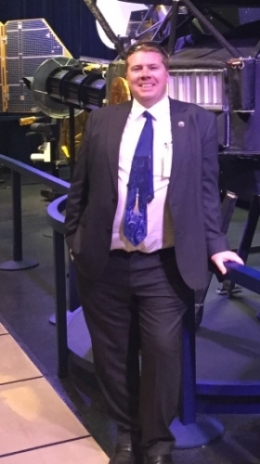 What Kelvin Long does in his recently published paper is to examine a deep space probe he calls SunVoyager. Long (Interstellar Research Centre, Stellar Engines Ltd) sees three primary science objectives here, the first being observing the nearest stars and their planets both through transit methods as well as gravitational lensing. A second objective along the way is the flyby of a dwarf planet that has yet to be visited, while the third is possible imaging of interstellar objects like 2I/Borisov and ‘Oumuamua. Driven by fusion, the craft would reach 1000 AU in a scant four years.

This is a multi-layered mission, and I note that the concept involves the use of small ‘sub-probes’, evidently deployed along the route of flight, to make flybys of a dwarf planet or an interstellar object of interest, each of these (and ten are included in the mission) to have a maximum mass of 0.5 tons. That’s a lot of mass, about which more in a moment. Secondary objectives involve measurements of the charged particle and dust composition of the interstellar medium, astrometry (presumably in the service of exoplanet study) and, interestingly, SETI, here involving detection of possible power and propulsion emission signatures as opposed to beacons in deep space.

Bur back to those sub-probes, which by now may have rung a bell. Active for decades in the British Interplanetary Society, Long has edited its long-lived journal and is deeply conversant with the Daedalus starship concept that grew out of BIS work in the 1970s. Daedalus was a fusion starship with an initial mass of 54,000 tons using inertial confinement methods to ignite a deuterium/helium-3 mixture. SunVoyager comes nowhere near that size – nor would it travel more than a fraction of the Daedalus journey to Barnard’s Star, but you can see that Long is purposely exploring long-range prospects that may be enabled by our eventual solution of fusion propulsion.

Those fortunate enough to travel in Iceland will know SunVoyager as the name of a sculpture by the sea in central Reykjavik, one that Long describes as “an ode to the sun or a dream boat that represents the promise of undiscovered territory and a dream of hope, progress, and freedom.” As with Daedalus, the concept relies on breakthroughs in inertial confinement fusion (ICF), in this case via optical laser beam, and in an illustration of serendipity, the paper comes out close to the time when the US National Ignition Facility announced its breakthrough in achieving energy breakeven, meaning the experiment produced more energy from fusion than the laser energy used to drive it. 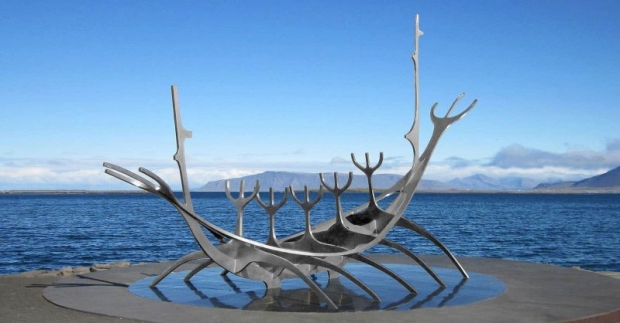 Image: The Sun Voyager (Sólfarið) is a large steel sculpture of a ship, located on the road Sæbraut, by the seaside of central Reykjavík. The work of sculptor Jón Gunnar Árnason, SunVoyager is one of the most visited sights in Iceland’s capitol, where people gather daily to gaze at the sun reflecting in the stainless steel of this remarkable monument. Credit: Guide to Iceland.

Long’s work involves a numerical design tool called HeliosX, described as “a system integrated programming design tool written in Fortran 95 for the purpose of calculating spacecraft mission profile and propulsion performance for inertial confinement fusion driven designs.” As a counterpart to this paper, Long writes up the background and use of HeliosX in the current issue of Acta Astronautica (citation below). The SunVoyager paper contemplates a mission launched decades from now. Long acknowledges the magnitude of the problems that remain to be solved with ICF for this to happen, notwithstanding the encouraging news from the NIF.

…a capsule of fusion fuel, typically hydrogen and helium isotopes, must be compressed to high density and high temperature, and this must be sustained for a minimum period of time. One of the methods to achieve this is by using high-powered laser beams to fire at a capsule in a spherical arrangement of individual beam lines. The lasers will mass ablate the surface of the capsule and through momentum exchange will cause the material to travel inward under spherical compression. This must be done smoothly however, and any significant perturbations from spherical symmetry during the implosion will lead to hydrodynamic instabilities that can reduce the implosion efficiency. Indeed, the interaction of a laser beam with a high-temperature plasma involves much complex physics, and this is the reason why programs on Earth have found it so difficult.

Working through our evolving deep space mission designs is a fascinating exercise, which is why I took the time years ago to painstakingly copy the original Daedalus report from an academic library – I kept the Xerox machine humming in those days. Daedalus, a two-stage vehicle, used electron beams fired at capsules of deuterium and helium-3, the resulting plasma directed by powerful magnetic fields. Long invokes as well NASA’s studies of a concept called Vista, which he has also written about in his book Deep Space Propulsion: A Roadmap to Interstellar Flight (Springer, 2011). This was a design proposal for taking a 100-ton payload to Mars in 50 days using a deuterium and tritium fuel capsule ignited by laser. Long explains:

The capsule design was to utilize an indirect drive method, and so a smoother implosion symmetry may give rise to a higher burn fraction of 0.476. This is where the capsule is contained within a radiation cavity called a Hohlraum and where the lasers heat up the internal surface layer of the cavity to create a radiation bath around the capsule; as opposed to direct laser impingement onto the capsule surface and the associated mass ablation through the direct drive approach. 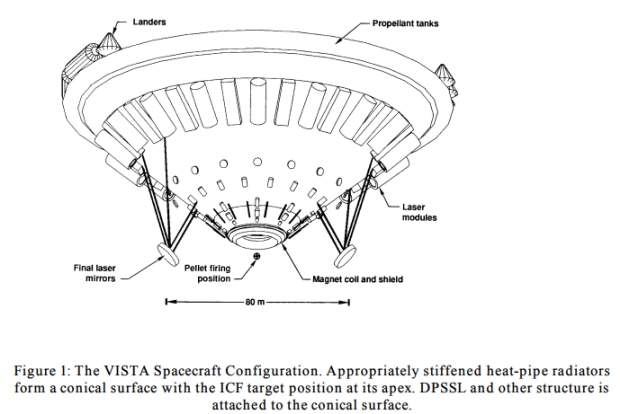 Image: Few images of the Vista design are available. I’ve swiped this one from a presentation made by C. D. Orth to the NASA Advanced Propulsion Workshop in Fusion Propulsion in 2000, though it dates back all the way to the 1980s. Credit: NASA.

SunVoyager would, the author comments, likely use a similar capsule design, although the paper doesn’t address the details. Vista feeds into Long’s thinking in another way: You’ll notice the unusual shape of the spacecraft in the image above. Coming out of work by Rod Hyde and others in the 1980s, Vista was designed to deal with early ICF propulsion concepts that produced a large neutron and x-ray radiation flux, sufficient to prove lethal to the crew. The conical design was thus an attempt to minimize the exposure of the structure to this flux, with a useful gain in jet efficiency of the thrust chamber. SunVoyager is designed around a similar conical propulsion system. The author proceeds to make predictions for the performance of SunVoyager by using calculations growing out of the Vista design as modeled in the HeliosX software.

In the tradition of Daedalus and Vista, SunVoyager explores ICF propulsion in the context of current understanding of fusion. I want to talk more about this concept next week, noting for now that a fast mission to 1000 AU –SunVoyager would reach that distance in less than four years – would take us into an entirely new level of outer system exploration, although the timing of such a mission remains hostage to our ability to conquer ICF and generate the needed energies to actualize it in comparatively small spacecraft systems. This doesn’t even get into the matter of producing the required fuel, another issue that will parallel those 1970s Daedalus papers and push us to the limits of the possible.

Next post: Sunvoyager’s Pedigree: On the Growth of Interstellar Ideas

Previous post: Gathering the Evidence for Life on Enceladus