LHS 475b, a planet whose diameter is all but identical to Earth’s, makes news not so much because of what it is but because of what it tells us about studying the atmospheres of small rocky worlds. Credit for the confirmation of this planet goes to the NIRSpec (Near-Infrared Spectrograph) instrument aboard the James Webb Space Telescope, and LHS 475b marks the telescope’s first exoplanet catch. Data from the Transiting Exoplanet Survey Satellite (TESS) were sufficient to point scientists toward this system for a closer look. JWST confirmed the planet after only two transits.

Based on this detection, the Webb telescope is going to live up to expectations about its capabilities in exoplanet work. NIRSpec is a European Space Agency contribution to the JWST mission, and a major one, as the instrument’s multi-object spectroscopy mode is able to obtain spectra of up to 100 objects simultaneously, a capability that maximizes JWST observing time. No other spectrograph in space can do this, but NIRSpec deploys a so-called ‘micro-shutter’ subsystem developed for the instrument by NASA GSFC. Think of tiny windows with shutters, each measuring 100 by 200 microns.

The shutters operate as a magnetic field is applied and can be controlled individually. Murzy Jhabvala is chief engineer of Goddard’s Instrument Technology and Systems Division:

“To build a telescope that can peer farther than Hubble can, we needed brand new technology. We’ve worked on this design for over six years, opening and closing the tiny shutters tens of thousands of times in order to perfect the technology.”

LHS 475b is a rocky world that orbits a red dwarf some 40 light years out in Octans. The data from NIRSpec, taken on 31 August 2022, could not be clearer, as the image below shows. 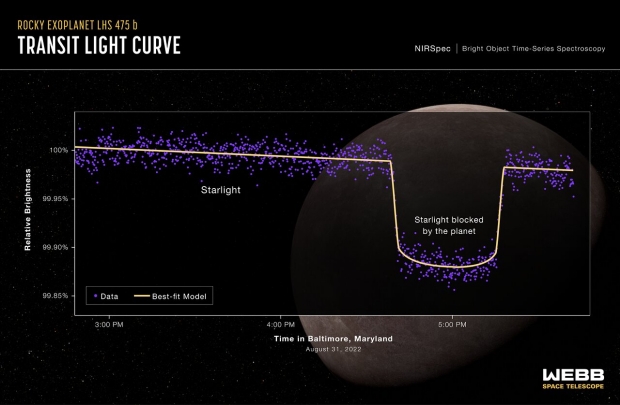 Image: This graphic shows the change in relative brightness of the star-planet system at LHS 475 spanning three hours. The spectrum shows that the brightness of the system remains steady until the planet begins to transit the star. It then decreases, representing when the planet is directly in front of the star. The brightness increases again when the planet is no longer blocking the star, at which point it levels out.] Credit: NASA, ESA, CSA, L. Hustak (STScI), K. Stevenson, J. Lustig-Yaeger, E. May (Johns Hopkins University Applied Physics Laboratory), G. Fu (Johns Hopkins University), and S. Moran (University of Arizona).

Transmission spectroscopy – applying the NIRSpec capabilities to the spectrum of starlight passing through the planet’s atmosphere during ingress and egress from a transit – should give us the opportunity to analyze the components of that atmosphere, assuming one is present. That work is ongoing but promising, as the scientists in a team led by Kevin Stevenson and Jacob Lustig-Yaeger (Johns Hopkins University Applied Physics Laboratory) pursue their investigation. JWST’s sensitivity to a range of molecules is clear, and the researchers have been able to rule out a methane-dominated atmosphere, while a compact envelope made up entirely of carbon dioxide remains a possibility. Additional spectra will be taken this summer. 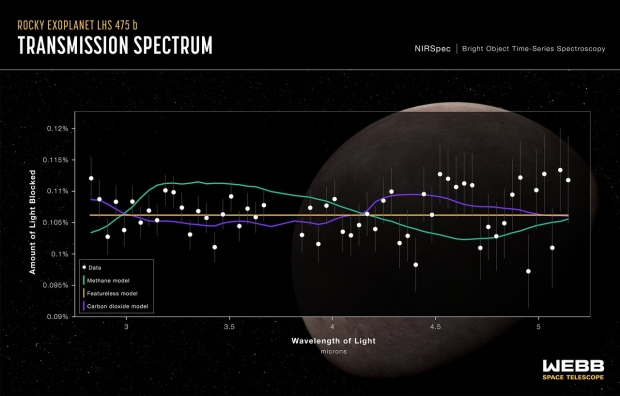 Given that LHS 475b orbits its star in two days, it’s no surprise to learn that the planet is considerably warmer than Earth even though it orbits an M-dwarf. We may well be looking at a Venus analogue, if an atmosphere does turn out to be present.

Bear in mind as JWST pushes into this area that M-dwarfs are prone to flares, especially in their earlier stages of development, and thus raise the question of whether a thick and detectable atmosphere can survive. LHS 475b may help us find out. The signs are promising, as the paper notes:

…our non-detection of starspot crossings during transit and the lack of stellar contamination in the transmission spectrum are promising signs in this initial reconnaissance of LHS 475b. These findings indicate that additional transit observations of LHS 475b with JWST are likely to tighten the constraints on a possible atmosphere. A third transit of LHS 475b is scheduled as part of this program (GO 1981) in 2023. An alternative path to break the degeneracy between a cloudy planet and an airless body is to obtain thermal emission measurements of LHS 475b during secondary eclipse because an airless body is expected to be several hundred Kelvin hotter than a cloudy world and will therefore produce large and detectable eclipse depths at JWST’s MIRI wavelengths… Our findings only skim the surface of what is possible with JWST.

The paper is Lustig-Yaeger et al., “A JWST transmission spectrum of a nearby Earth-sized exoplanet,” in process at Nature Astronomy (preprint).

Previous post: Sunvoyager’s Pedigree: On the Growth of Interstellar Ideas