With the Jupiter Icy Moons Orbiter (JIMO) on hold, NASA is talking to the European Space Agency about a possible joint mission to Europa. A BBC story reports that a prime driver for ESA is the need to use radioisotope thermal generators (RTGs) on the mission, a power source with which the Europeans have little experience. RTGs are needed on missions to the outer planets because they increase the power available to the spacecraft, allowing for a wider range of experiments with more sophisticated instruments. Solar panels remain an option in Jupiter space, but aren’t nearly as effective.

The other driver, of course, is the recent success of the Cassini/Huygens combined mission, whose stunning images of the Saturnian system and data from the Titan descent and landing have many scientists now thinking of Europa. The moon’s cracked ice seems to have been shaped by tidal forces from Jupiter, with reason to believe that an ocean of liquid water might be found beneath an ice crust tens of kilometers deep. Are microorganisms — or other forms of life — feasible in such an environment? A dual orbiter/lander mission, or perhaps a Jupiter orbiter acting as relay for a Europa orbiter, would provide many answers, and could be flown at much lower cost than JIMO. 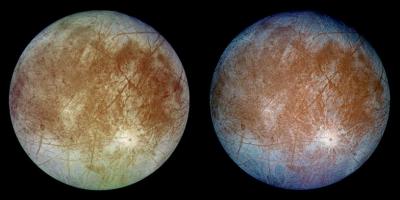 Image: Two views of the trailing hemisphere of Jupiter’s ice-covered satellite, Europa. The left image shows the approximate natural color appearance of Europa. The image on the right is a false-color composite version combining violet, green and infrared images to enhance color differences in the predominantly water-ice crust of Europa. Dark brown areas represent rocky material derived from the interior, implanted by impact, or from a combination of interior and exterior sources. Credit: Jet Propulsion Laboratory.

Meanwhile, a team at the German Aerospace Centre is working on a prototype melting probe called SUSI, which could eventually be powered by a radioactive heating unit and used on a Europa lander (the prototype is a hollow aluminum cylinder with heat supplied by an attached electrical cable). Such a probe could analyze ocean water for microbial life, either returning to the surface with samples or beaming data through the ice to the lander on the surface and thence to an orbiter or relay satellite. Plans are to test the prototype in Greenland or the Antarctic.

The NASA/ESA discussions are only in their preliminary stages, and any Europa mission resulting from them would launch no earlier than 2016. But ESA sounds serious about the idea. The BBC quotes the agency’s David Southwood: “I’d much rather do this with RTGs, and that makes it almost certainly a joint venture with the Americans and why should we do it separately? This was waiting to happen. Someone just had to say it.”