We’ve recently discussed habitable zones, normally defined as the area around a star where liquid water can exist on the surface. Thoughts on just how far the habitable zone around our own star extends vary, but the Carnegie Institution’s Maggie Turnbull pegs it at between .7 AU and 1.5 AU. To adjust the notion of habitable zone to other stars, Turnbull says, the same relationship can be scaled as the square root of the luminosity of the star.

Turnbull thinks about such things because she has created a database of stars that could have terrestial-type planets around them. This is clearly of significance to future missions like Terrestrial Planet Finder and makes me wish I had been able to attend the NASA Forum for Astrobiology Research in March, where Turnbull gave a talk called “Remote Sensing of Life and Habitable Worlds: Habstars, Earthshine and TPF.” The next best thing is an edited transcript of the lecture in Astrobiology Magazine, which is running it in a series of four parts under the title “Surfing the Wavelengths.”

While the goal of Terrestrial Planet Finder is to image planets between Mars and Earth size (and perhaps somewhat larger) that exist in their stars’ habitable zones, a second goal is to study the atmospheres of these worlds. The mission will work in the mid-infrared because in those wavelengths, planets emit their own light, even as light from the star prevents less glare. From the transcript:

So a planet’s mid-infrared light can give us a handle on the temperature of the planet, and tell us if that temperature is right for liquid water at the surface. Also in the mid-infrared, we can see some exciting signatures, such as carbon dioxide, water, and ozone. Since ozone is a proxy for molecular oxygen, it’s an indicator of life.

Ponder the challenge: the Earth is ten billion times less bright than the Sun at optical wavelengths, but in the mid-infrared, it’s ‘only’ a million times less bright. The Earth-Sun system at ten parsecs (30 light years) would have an angular separation between Earth and the Sun of 100 milliarcseconds, a separation so vanishingly small that it calls for interferometry — flying a number of vehicles in formation, or else a single, very large telescope. (Centauri Dreams continues to advocate Webster Cash’s New Worlds Imager for this mission — see the story Planetary Systems in the Billions from last September).

According to Turnbull, though, as we move toward efficient and practical interferometry in space, Terrestrial Planet Finder will start its work in the optical range, with a 2014 mission carrying a coronagraph that will suppress the light of the central star to allow any planets to be observed. And this is intriguing:

In the Earth’s optical spectrum, we see Rayleigh scattering in the blue part of the spectra – we’re seeing the blue sky of our planet. We also have signs of oxygen, ozone, and water. We may even be able to see signs of vegetation in the optical.

The interesting thing about observing the Earth in the optical is that you can see all the way through Earth’s atmosphere to the ground. The light that reflects back contains the spectrum of whatever is on the ground of that planet, whether it’s oceans, or soil, or plants. And plants happen to have a very distinctive spectrum that could be observable even across stellar distances.

What better way to close a discussion of observing terrestrial worlds than with a picture of our own? The ‘pale blue dot,’ perhaps the most stunning of space images, was a parting gift from Voyager 1 as it left the Solar System. 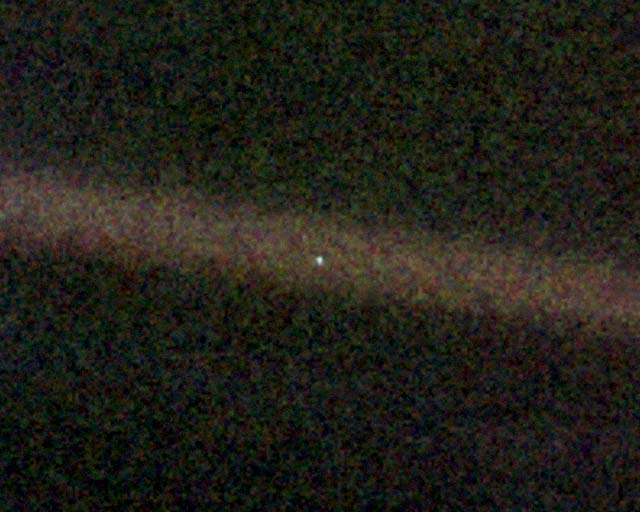 Here’s what Carl Sagan said about this image: “… We succeeded in taking that picture [from deep space], and, if you look at it, you see a dot. That’s here. That’s home. That’s us. On it, everyone you ever heard of, every human being who ever lived, lived out their lives. The aggregate of all our joys and sufferings, thousands of confident religions, ideologies and economic doctrines, every hunter and forager, every hero and coward, every creator and destroyer of civilizations, every king and peasant, every young couple in love, every hopeful child, every mother and father, every inventor and explorer, every teacher of morals, every corrupt politician, every superstar, every supreme leader, every saint and sinner in the history of our species, lived there on a mote of dust, suspended in a sunbeam.” From a 1996 commencement address, drawing on Sagan’s Pale Blue Dot: A Vision of the Human Future in Space (New York: Random House, 1994).

Next post: SETI? Here’s Why We Need to Keep Looking