The so-called ‘Pioneer Effect’ continues to trigger study. Both Pioneer 10 and 11, as discussed in these pages back in November, have shown changes in their expected trajectories since they moved 20 AU beyond the Sun. In fact, since 1980 radio signals from the Pioneers have been slowly shifting to shorter wavelengths, which seems to imply a slight but interesting deceleration. This has led to at least one proposal for a mission to investigate the Pioneer effect. 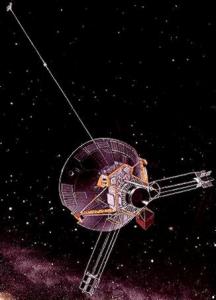 Both Galileo and Ulysses data have been examined for evidence of a similar effect; while Galileo’s data were too limited for use, Ulysses did show a provocative, though extremely slight, change to its own acceleration (though at a much smaller distance from the Sun). Now a new paper notes the difficulties in measuring the Pioneer anomaly, and discusses a way of using asteroids and comets to measure gravitational effects in the outer Solar System. The paper is by computer scientists Gary Page and John Wallin (George Mason University), along with Jornada Observatory (NM)’s David Dixon.

According to the authors, three asteroids (5338, 8405, and 2001XA255) of the fifteen in a suitable orbital geometry have sufficient size and brightness to be observed for significant periods beyond 20 AU. The paper continues:

Thus, these asteroids should provide a mechanism for observing the gravitational field in the outer solar system and permit its use in investigating the Pioneer Effect and in a broader context, the mass distribution in the outer solar system. Additionally, many of the other candidate asteroids could be observed in the near future, when they are not in the Pioneer Effect region, in order that their orbits be tied down with observations when they are close (perhaps including high precision radar observations). This could be done in anticipation of continuing observations when they move further out and become subject to the Pioneer Effect.

Make no mistake, we may find that there are simple explanations to what is going on with the Pioneers. Anything from measurement errors to gas leaks aboard the aging spacecraft could prove to be the culprit — interplanetary dust, for example, has been suggested as a drag force, or perhaps the cause of a red shift in the spacecraft’s radio signals. But the suggestion that new physics may be involved is tantalizing. Moreover, the Pioneers are unusually useful platforms for such study. Spacecraft launched more recently engage in course corrections that could mask subtle effects like what the Pioneers are experiencing. How these tiny craft move as they are buffeted by the solar winds through their long exit from the heliosphere has much to tell us.

As the authors conclude: “The bottom line is that the Pioneer Effect seems well-founded and has not been convincingly explained in terms of known physics and engineering parameters of the spacecraft involved. Although spacecraft systematics remain the most likely explanation for the Pioneer Effect, its potential existence is of great interest for a variety of fundamental physical reasons.”

Centauri Dreams‘ take: This paper bears interest beyond the Pioneer Anomaly it sets out to investigate. Assuming an explanation for the anomaly is found within conventional physics, the authors’ study of using solar system bodies like the three named asteroids as ‘gravitational probes’ of the outer Solar System is ingenious, and may provide useful data on the Kuiper Belt. While comets are problematic for this purpose because of their frequent outgassing, as the authors point out, asteroids fit the bill nicely. Thus the authors’ conclusion: “There is nothing quite as useful as a big, unwieldy, dynamically dead chunk of rock for investigating small variations in Newton’s Laws.”

“Utilizing Minor Planets to Assess the Gravitational Field in the Outer Solar System” is available on the ArXiv site. Also be aware of Laurent Nottale, “The Pioneer anomalous acceleration: a measurement of the cosmological constant at the scale of the solar system,” found here.