Finding Planets in the Starshine

Finding planets around other stars is hampered by a key fact: the light from the primary star effectively masks the far dimmer reflected light from any planets. But NASA engineers at the Keck Observatory (Mauna Kea, HI) have used the Keck Interferometer in conjunction with a light-blocking device to suppress the starlight around three stars, one of which is Vega. The procedure may be used to detect dust disks of planetary systems in formation. 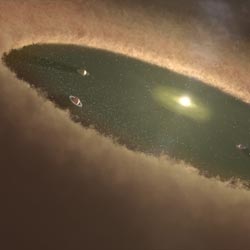 Keck’s interferometer links its two 10-meter telescopes to provide the resolving power of a much larger instrument (in Keck’s case, one the size of a football field). Examining dust disks in greater and greater detail is crucial, because NASA needs to select targets for its Terrestrial Planet Finder mission, which will use both visible light and infrared to look for Earth-like worlds. Acquiring the right ‘signature’ for likely systems means studying their dust disks to determine which might have spawned such planets.

Image: Astronomers know that dust disks may breed planets. This artist’s conception is based on data from the Spitzer Space Telescope that reveals a gap in a protoplanetary, or planet-forming, disk surrounding a young star. The new work with the Keck Interferometer may provide parameters for judging which stars are the most likely candidates for terrestrial planets, based on much better imagery and analysis of such disks. Image credit: NASA/JPL-Caltech.

To put the search for terrestrial worlds in context, the discovery of six new worlds was announced in August, ranging from 20 to 289 light years from Earth. But the largest of these is 1.6 times as massive as Jupiter; the smallest is roughly the size of Uranus, some 14 times the mass of Earth. All six of the new planets orbit their stars much closer than the distance between Mercury and our Sun. It is clear that a new generation of instruments like those aboard the Terrestrial Planet Finder missions will be needed to uncover the kind of small, rocky world that could be the home to life.