Of Missions and Deep Time

The successful return of the Stardust samples offers a chance to study cometary materials up close, surely deepening our understanding of the origins of the Solar System. But it also serves as a reminder of the time frames in which deep space missions must be flown. At that, Stardust has been a relatively swift mission, traveling some 2.88 billion miles in a seven-year journey. But ten years of planning also went into that journey, and design work goes back over 20 years.

Thus Don Brownlee’s comment on the mission’s origin. “I have been waiting for this day since the early 1980s when Deputy Principal Investigator Dr. Peter Tsou of JPL and I designed a mission to collect comet dust,” said Dr. Brownlee. “To see the capsule safely back on its home planet is a thrilling accomplishment.” As well it must be, for Brownlee (University of Washington, Seattle) is principal investigator for the entire Stardust mission. 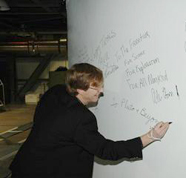 Now thoughts turn to New Horizons, just over a day from launch. Scheduled to fly past Pluto and Charon in 2015, New Horizons will press outward into the Kuiper Belt. It’s designed to be a 15-year mission, but its genesis was in the late 1980s, and as principal investigator Alan Stern recently told ABC News, “If I and my ‘Pluto underground’ colleagues had known then what it would take, how many meetings, proposals, presentations, reversals, setbacks, and outright cancellations it would take, we probably would not have had the courage to take on the task.”

Image: In the Vertical Integration Facility on Launch Complex 41, Cape Canaveral Air Force Station, Hal Weaver, New Horizons project scientist with the Johns Hopkins University Applied Physics Laboratory, signs the fairing enclosing the New Horizons spacecraft. Among the inscriptions on the fairing is Alan Stern’s: “To the frontier, for science, for exploration, for all mankind.”

So a glimpse of modern mission design goes like this: a 31 year old scientist (Stern’s age when he began his Pluto efforts) begins lobbying for a spaceflight that will conclude its primary mission when he is twice that age. Even setting aside the funding frustrations and political maneuvering it takes to make a mission happen, the time frames are daunting. Think, too, about Voyager scientists who saw their missions launch in the 1970s and are witnessing the real prospect of continued data as far out as 2020. To be a space scientist today is to master the art of patience.

The challenge of deep space is as much chronological as it is a matter of distance. If and when we start looking at missions into the Oort Cloud, which is about as far from the Sun as Proxima Centauri is from Centauri A and B, we will be talking — absent major propulsion breakthroughs — about flights that long outlive their principal investigators. The new model of spaceflight will operate on such time frames, with researchers reasonably hoping to see their missions well on their way before handing them off to the next generation of controllers, those who will see journey’s end. This seems to confound the human psyche in a culture as fast-paced and relentless as ours, but on a more profound level it resonates with the deep rhythms of time, a more appropriate mode for the ever more complex spacecraft that will one day probe planets around other stars.