A Terrestrial Planet Finder That Works

Yesterday we looked at ESA’s Darwin mission, and the plan to use a fleet of space telescopes to see planets around other stars. How else could you accomplish this goal? One option is a starshade like New Worlds, working with a distant space telescope to null out glare from the star. Another is an internal coronagraph, a device within the telescope itself that masks the glare. Centauri Dreams has backed the starshade idea, looking at its practicality and advantages over existing coronagraph designs (click here to see a breakdown of the pros and cons of each). 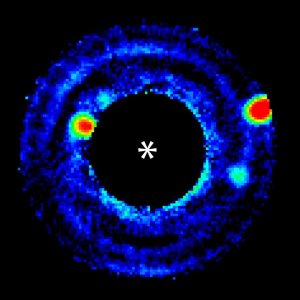 But what if the coronagraph were dramatically improved? Scientists at the Jet Propulsion Laboratory believe they have done just that. In fact, John Trauger, lead author on a paper on this work that has just appeared in Nature, has this to say: “Our experiment demonstrates the suppression of glare extremely close to a star, clearing a field dark enough to allow us to see an Earth twin. This is at least a thousand times better than anything demonstrated previously.” That’s a bold claim, but one rigorously developed in JPL’s High Contrast Imaging Testbed, which allows coronagraph technologies to be examined in a space-like environment.

Image: Three simulated planets — one as bright as Jupiter, one half as bright as Jupiter and one as faint as Earth — stand out plainly in this image created from a sequence of 480 images captured by the High Contrast Imaging Testbed at JPL. A roll-subtraction technique, borrowed from space astronomy, was used to distinguish planets from background light. The asterisk marks the location of the system’s simulated star. Credit: NASA/JPL-Caltech

So how do you get past the major coronagraph obstacles? Diffracted light can create a spike or ring pattern around stars in a telescopic image, blocking the faint light of planets. Trauger’s team uses a set of masks that clear the diffraction artifacts while blocking much of the starlight. A second problem is scattered light, the speckling caused by ripples in the telescope mirror. It is addressed by using a deformable mirror whose surface can be tweaked by computer-controlled actuators. Up next for the team is an improvement in speckle suppression as the technology battles for a place on a future terrestrial planet finding mission.

What lies ahead for this latest coronagraph concept? Ian Jordan (CSC/STScI) described Trauger’s work as ‘significant progress’ toward the goal of finding extrasolar terrestrial planets. And he agreed with Trauger and collaborator Wesley Traub that demonstrating the instrument’s sensitivity in broadband optical light — and not just in the coherent laser light thus far used — will further test and extend the idea. Says Jordan:

If the passband for adequate suppression is too small, then the throughput of the system will remain ‘slow’. Slow is problematic for several reasons: 1) exoterrestrial analogues are inherently faint and their photons are few and far between anyway, 2) spectroscopy of the planetary signatures is important for determining what the faint objects are and may demand relatively high system throughput.

Throughput is critical for finding and studying the faint objects the coronagraph is designed to hunt. “Telescope time is precious,” adds Jordan, “and preserving as many of the planetary photons making their way to the aperture from as much of the field of view as possible is a goal for TPF.” Another coronagraph advantage: ‘slew’ times — the time needed to move the telescope to a new target — are much shorter for internal coronagraph designs than for external occulters.

Centauri Dreams‘ take: This impressive work keeps the coronagraph in serious competition with starshade concepts as we work out the technologies for future planet finder missions. A major constraint will be cost — let’s see how the numbers match up as both technologies continue to be refined within budgets we can realistically hope to meet.

The paper is Trauger, John and Wesley Traub, “A laboratory demonstration of the capability to image an Earth-like extrasolar planet,” Nature 446 (12 April 2007), pp. 771-773 (abstract available).