If you want to follow the Dawn mission to Ceres and Vesta in detail, you’ll want to know about Dawn’s Early Light, the newsletter being published online to keep scientists up to date about its progress. With a launch window opening in late June, Dawn will be worth following on many fronts, not the least of which are its targets: Ceres and Vesta. These tiny protoplanets seem to be at opposite ends of the planetary formation spectrum. Ceres shows signs of water-bearing minerals and an extremely tenuous atmosphere, while Vesta is dry and significantly cratered. 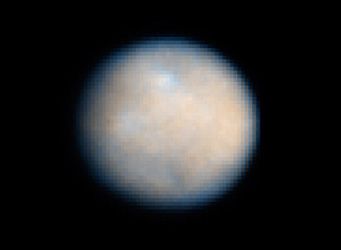 In fact, the large impact crater that covers much of Vesta’s southern hemisphere is thought to be the source of material we can study here on Earth. Howardite, eucrite, and diogenite (HED) meteorites are now thought to have been ejected less than a billion years ago by the crater-forming impact, which flung debris that fell millions of years later onto our planet. Can we really identify meteorites conclusively as coming from Vesta? The delivery mechanism seems sound and experimental work suggests Vesta as the ultimate source (click here for more on this work from Michael Drake at the University of Arizona’s Lunar and Planetary Laboratory).

Image: Ceres as viewed by the Keck Observatory (Mauna Kea, HI). What was once thought to be a flat surface now seems rich in features. Does Ceres contain water from the days of the Solar System’s formation? Credit: NASA, ESA, J. Parker (Southwest Research Institute).

As to Ceres, its surface shows no signs of water ice but studies with the Hubble Space Telescope have looked at its shape and spin rate, both of which imply a rocky core covered by a layer of ice that could be anywhere from 60 to 120 kilometers thick. Dawn should be able to tell us something about the internal structure of these protoplanets, both of which have remained intact since their formation. And that helps us understand the conditions under which these objects formed, as well as deepening our understanding about the basic building blocks of larger planet formation.

In mid-June, the spacecraft goes from the processing facility at Titusville FL to the launch pad preparatory to beginning its eight-year journey to the asteroid belt. From a propulsion standpoint, Dawn’s ion engines offer another chance to shake down a useful outer-planet technology. We’re talking tiny levels of acceleration here — about the weight of a piece of paper in your hand — but over long acceleration times, ion engines make it possible to fly missions that would be far heavier (and pricier) if performed with chemical rockets. Factors like that helped to keep the Dawn mission alive despite NASA’s current budgetary woes.