Investigating brown dwarfs is not for the faint of heart. With a mass below what’s needed to sustain hydrogen-burning fusion, they’re hard to see, and they may be far more numerous than we’ve previously estimated. Nor do we have a good handle on how they function, to judge by a new study showing that these objects can possess powerful magnetic fields. It turns out that the ‘failed star’ designation may be a bit inapt. Sure, they’re dim objects but in recent years, it has been discovered that some brown dwarfs put out beams of radio waves that are thousands of times brighter than any detected from our Sun.

Brown dwarfs, in other words, are actually pretty lively. If you think about other sources of flashing radio signals, pulsars come immediately to mind. Their powerful magnetic fields and incredibly fast rates of rotation make figuring out how they produce their signals a difficult matter. Now we find brown dwarfs emerging as a second class of stellar objects that produce such powerful and persistent radio signals. But their emissions come from much slower systems, somewhat easier for astronomers to model and showing similarities to radio emissions generated by planets like Jupiter. 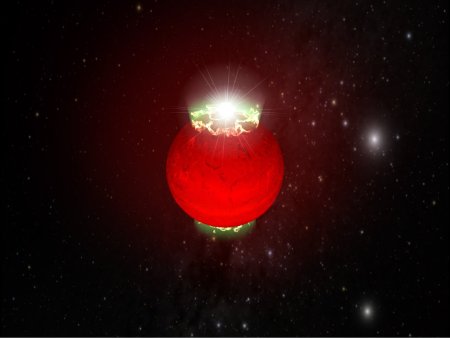 Image: Artist’s impression of the “super-aurorae” present at the magnetic poles of these radio emitting dwarfs that are responsible for the radio pulsations. Credit: Gregg Hallinan/National University of Ireland.

The new work rules out the processes of radio emission found in the Sun — the brown dwarf pulses are far too bright to be explained in this way. What brown dwarfs seem to represent, in fact, is a kind of missing link between pulsar-style emissions and those we find around Jupiter (the giant planet’s emissions can sometimes exceed those of the Sun). Says Gregg Hallinan (National University of Ireland, Galway):

“Brown dwarfs tend to be seen as a bit boring – the cinders of the galaxy. Our research shows that these objects can be fascinating and dynamic systems, and may be the key to unlocking this long-standing mystery of how pulsars produce radio emissions.”

Of the three brown dwarfs Hallinan’s team studied with the Very Large Array, the dwarf TVLM 513 points best to the similarity between what we see at Jupiter and the distant pulsar flashes. One possible source of the Jovian emissions: rapid rotation that promotes electron acceleration when electrically charged gas from Io is accelerated by the planet’s magnetic field. The observed radio ‘flash’ around the brown dwarf occurs every 1.96 hours, but there seems to be no binary system here, nor have any planets been detected. Just what makes the high energy electrons accelerate into the dwarf’s magnetic poles remains a mystery.

These radio emissions are powerful enough to flag the size of the brown dwarf’s magnetic field. So what percentage of known brown dwarfs is a pulsing radio source? That question, now due to be studied by Hallinan’s team, is an important one. Assuming pulsing sources are frequent, they could become the key to detecting more of the difficult to observe dwarfs. That would make brown dwarfs a little less exotic and provide a real boost in fleshing out our catalogue of stellar systems in nearby space.

Next post: Microwave Beaming: A Fast Sail to Mars