The European Space Agency’s DARWIN mission proposal is now available online, well worth a look if you’re hoping to keep up with planet-hunter spacecraft technologies. With a launch date dependent upon the evolution of its technology, DARWIN probably won’t get off for another decade, but with a primary goal of detecting and studying terrestrial planets around other stars, it is sure to be a high-visibility mission as it continues development. 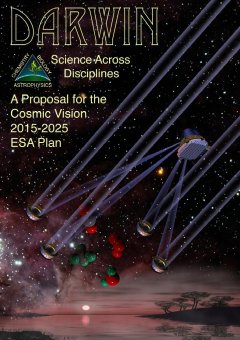 According to the proposal, the baseline DARWIN mission is to last five years and will target approximately 200 individual stars at mid-infrared wavelengths. The focus is on stellar types F, G, K and some M stars (about ten percent of the total). Of these, between twenty-five and fifty planets will be studied spectroscopically for evidence of gases such as CO2, O3 and H20. The mission planners are currently assuming the number of terrestrial planets in the habitable zone is one per system, adding that data from NASA’s Kepler mission will be useful in evaluating this conclusion.

And note this from the report:

…nearby K and M dwarfs are the easiest targets in terms of Earth-like planet detection for a given integration time. This is because the thermal infrared luminosity of a planet in the Habitable Zone depends only on its size. On the other hand, the stellar luminosity is a strong function of its spectral type. This means that the star/planet contrast varies with spectral type. Compared to the case of the Sun and Earth, this contrast is two times higher for F stars, a factor of three lower for K stars, and more than an order of magnitude lower for M dwarfs. Nevertheless, Darwin will focus on solar-type G type stars (50% of the observing time), and a significant number of them can be screened and any discovered terrestrial planets studied.

To retrieve the faint emission of a terrestrial planet from the nearby starshine, ESA estimates a 100-meter telescope would be required, a vast undertaking not currently within our technological limits. So DARWIN turns to four collector spacecraft feeding light to a ‘beam combiner’ craft. The chosen interferometer array is called Emma, and it allows the formation-flying telescopes to perform like a single, larger instrument. 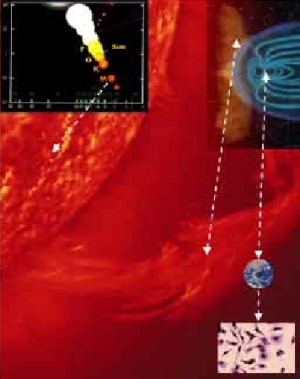 The diameter of the collector telescopes is a key issue: With 1-meter telescopes, the number of targets screened is reduced to about 75; with 3-meter mirrors, 2/3 of the catalog of stars compiled as possible targets can be examined. The report notes the potential for spurious signals from residual starlight (stellar leakage), the local zodiacal background produced by dust particles around our own Sun, the exo-zodiacal light from the target star’s dust disk, and the instrumental background produced by thermal emissions within the instruments. Details are in the report, but this is enough to suggest the magnitude of the detection task.

Image: Mass ejections and winds from low mass M and K-type stars can erode the atmosphere of planets in the habitable zone. Darwin will study how such activity influences the magnetic dynamo, atmosphere, and biology of these planets. Credit: DARWIN Mission Proposal.

Keep your eye on missions that have a direct impact on DARWIN:

How close are we to making DARWIN a reality? Here’s the report’s conclusion, referring to the TRL (Technology Readiness Level) scale from 1 to 9, in which a 6 indicates readiness for a technology demonstration and a 9 is readiness for launch and operations:

The message from the last decade of Darwin technology development is clear: if the Research and Technology effort that has been pursued in both Europe and the United States continues vigorously, Darwin’s technology will reach TRL 5/6 by 2010, allowing it to be selected as ESA’s first L mission for launch in 2018-2020.

So that’s the time frame. With as much play in the numbers as this suggests, and given the amount of work needed in tuning up both interferometry and formation flying, this may be an optimistic target. ESA is upfront about viewing DARWIN as one of the most ambitious missions it has ever undertaken. The potential scientific reward, however, is huge. With spectroscopy of individual Earth-like planets, we’ll have a good chance at discovering whether or not we’re looking at living worlds. No possibility could be more tantalizing.

The DARWIN mission proposal to ESA can be downloaded here in basic form, with a high-resolution version also available.