Would large amounts of water on the surface provide a glint of light in both the infrared and visible spectrum if we study a distant exoplanet long enough? That’s the premise of an investigation now in progress, one aiming to find Earth-like planets in the habitable zone of a star. Darren Williams (Penn State Erie) and Eric Gaidos (University of Hawaii) have something more in mind than analyzing a planetary atmosphere for signs of water. They want to spot planets with water on the surface.

If the goal sounds chimerical now, bear in mind that various planet-hunting missions like Terrestrial Planet Finder (in its various incarnations) and Darwin are being designed to allow direct observation of planets as small as the Earth. Such observatories, which may be in place within two decades or less, could also examine the visible and infrared light curve of such planets over the course of an entire orbit.

“We are going to look at the planets for a long time,” says Williams. “They reflect one billionth or one ten billionth of their sun. To gain enough light to see a dot requires observation over two weeks with the kinds of telescopes we are imagining. If we stare that long, unless the planet is rotating very slowly, different sides of the planet will come through our field of view. If the planet is a mix of water, we are going to see the mix travel around the planet.”

According to the paper on this work, half of all detected extrasolar planets will have orbital inclinations that make it possible to detect surface oceans. When we looked at this idea back in January, one thought particularly stood out from the team’s paper: “… of all the extremely difficult measurements astronomers hope to make with a TPF-class telescope, time-series photometry and polarimetry that can lead to the identification of specular reflection from surface water might be the easiest.” This Penn State news release catches up with the current thinking of the researchers. 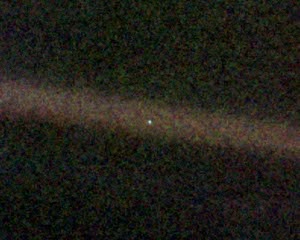 What to do while we wait for a mission capable of making such detections? One idea is to do what Voyager did long ago in the famous ‘Pale Blue Dot’ photograph, looking back at our own planet to study its signature at various wavelengths. Voyager’s view was fascinating largely for what it represented — our world from the outer reaches of the Solar System — but Williams has now enlisted the Mars Express and Venus Express missions to occasionally view the Earth and examine its various phases. That data should provide a useful baseline for the kind of studies that may one day find Earth’s twin.

Image: The famous ‘pale blue dot’ photograph taken by Voyager 1. Looking back at our planet from distant viewpoints will tell scientists much about detecting water on distant worlds. Credit: NASA/JPL.

And if we do find a world in the habitable zone with liquid water on the surface? The odds for life will obviously go up, supplemented by whatever spectrographic data we gather. As to intelligence, we all have our viewpoints on its likelihood, but such observations may prove inconclusive. About the only certainty we’ve had in our explorations of our own Solar System is that we have continued to be surprised, so it’s reasonable to assume we’ll run into more than our share of enigmas around other stars.

The paper is Williams and Gaidos, “Detecting the Glint of Starlight on the Oceans of Distant Planets,” upcoming in Icarus and available online. Let me also recommend Greg Bear’s Queen of Angels for a look at just how tantalizing (and confounding) the detection of exoplanetary life can be, in this case by a probe in the Centauri system.