One way to advance interesting science is to give it multiple uses. If you can make one aspect of what you’re doing broadly accessible to the public, you can use that lever to promote understanding (and funding) for the rest of it. All of which comes to mind as I look at Joe Davis (Massachusetts Institute of Technology), who has the engaging notion of building a tower to throw some of nature’s energy back into the sky. He would do this on an island off the US Gulf coast, one idea being to memorialize the victims of hurricane Katrina. 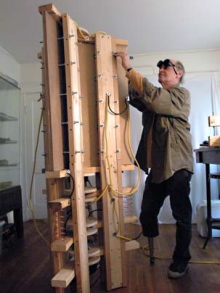 Stay with me on this, because the connection with interstellar travel is interesting. Imagine a hundred-foot tower something like a lightning rod, but with three vertical masts made of aluminum. When lightning strikes the tower, a resonant cavity is formed that breaks down nitrogen in the air and triggers an ultraviolet laser discharge, sending the beams back into the sky. Davis expects secondary laser discharges triggered by the first will be produced. And that may well remind you of interstellar sail ideas, a vast reflective sail being pushed by laser beam to the outer edges of the Solar System and beyond.

Image: MIT biology research affiliate Joe Davis works in his apartment in Cambridge on the prototype for a Hurricane Katrina memorial–a 109-foot tower that will send laser beams into the sky. He recently won a Rockefeller fellowship for the project. Credit: Donna Coveney.

Call it a lightsail rather than a solar sail, driven by those intense laser beams in ways that interstellar theorist Robert Forward so brilliantly detailed both in his scientific papers and his fiction. Forward, of course, took the idea well beyond the outer limits of our engineering, envisioning an enormous Fresnel lens between the orbits of Saturn and Uranus that would tune laser light from an installation close to the Sun, keeping the beam collimated so that it would remain narrow enough to continue pushing a reflective sail to another star.

Image: Scientist and author Robert Forward. Note the vest, one of many made for Forward by his wife Martha, and a trademark in his many public appearances. Credit: Salmon Library/University of Alabama at Huntsville.

Davis’ plan, of course, only suggests such concepts, and it’s hardly utilitarian for a specific space mission. But I like its multi-purpose design, and the fact that Davis is getting technical and financial support from private donors as well as the Rockefeller New Media Fellowship. The Mississippi coast is an ideal place to study the electrodynamics of natural storms, producing information that may be helpful down the line in future Katrina situations. So the ‘Call Me Ishmael’ project is a research effort as well as a monument like no other, which is why the Mississippi Arts Commission may get into the act, as local arts groups already have done.

Davis, a biologist who spent most of his childhood in Mississippi, crosses the line between science and art with evident ease. Again I think of Forward, whose energies were such that when he wasn’t developing breakthrough ideas for propulsion, he was to be found penning novel after novel in which those ideas took shape and were eased into the public consciousness. Never the most literary of novelists (as he would have been quick to tell you), he could nonetheless make a tale come alive with the power and originality of his concepts. Dragon’s Egg (Ballantine, 1980) is a good place to start, but you’ll want to read Rocheworld (Baen, 1990) for his ultimate take on lightsails to the stars.

Addendum: Larry Klaes forwards this interesting article in Scientific American on Joe Davis and his work. Note this snippet, which suggests the eclectic nature of Davis’ interest in deep space:

Davis set about creating what he calls “an infogene, a gene to be translated by the machinery of human beings into meaning, and not by the machinery of cells into protein.” His idea was to send a message in a bottle to extraterrestrials: to genetically engineer a sign of human intelligence into the genome of bacteria, grow them up by the trillions and fling them out across the heavens, to land where they may. …[T]he real message was of course aimed not at aliens, but at a public that has yet to digest the fact that DNA can encode any information, not just genetic sequences.

Next post: Frontiers of Propulsion Science: A Major New Text