IBEX: Viewing the Edge of the Solar System

Interstellar Boundary Explorer (IBEX) may be the perfect name for the mission to be launched on Sunday the 19th, but the word ‘interstellar’ has some people thinking this is a precursor mission, headed out for deep space in the fashion of the Voyagers or New Horizons. Nothing could be further from the truth. IBEX is destined for a sedate though distant orbit reaching 240,000 kilometers above the Earth. Its instruments are the interstellar component, enabling the spacecraft to study the ever-changing boundary between the heliosphere and the true interstellar medium.

Two Energetic Neutral Atom cameras are the operative tools, capable of detecting atoms emitted from this distant region. This is a fascinating mission for interstellar advocates, for we’re looking at the effect of the solar wind as it collides with the cloud of interstellar materials through which the Earth moves. The shock wave that occurs where the solar wind meets the edge of the ‘bubble’ of materials streaming out from the Sun is what the spacecraft will study.

“These atoms represent the sound of the shock, and they are barely audible. We will only measure a few thousand atoms each day, so we had to make a jumbo camera. Only our camera
detects atoms instead of light,” said Herb Funsten, Los Alamos’s principal investigator on the instrument. “Every six months we will make global sky maps of where these atoms come from and how fast they are traveling. From this information, we will be able to discover what the edge of our bubble looks like and learn about the properties of the interstellar cloud that lies beyond the bubble.”

The solar wind, of course, plays into propulsion concepts that might one day harness its 1.6 million kilometer per hour flow to push deep into the Solar System and beyond, using magsail or other technology. Recent studies using data from the Ulysses spacecraft have shown that the solar wind has diminished markedly and is in fact lower than in any previous measurements. That has implications for galactic cosmic rays, the energetic particles from outside the Solar System that create potential health risks for astronauts moving beyond Earth orbit.

A diminished solar wind may weaken the heliosphere, allowing more galactic cosmic rays into the inner system. And variations in wind strength are obviously critical for futuristic designs that would attempt to use solar wind energies for controllable propulsion. 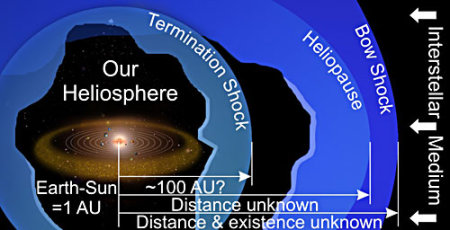 The Voyager spacecraft have already sketched in early information about the heliosphere, with Voyager 1 evidently crossing the termination shock in 2004 at a distance of 94 AU. That event was flagged by simultaneous increases in the intensity of energetic particles and magnetic field strength, but the failure of Voyager 1’s plasma detector made it impossible to gauge the velocity of the solar wind after crossing the shock. It may be up to Voyager 2, itself now approaching the termination shock, to provide the needed measurements of the plasma’s velocity.

What IBEX brings to the table is the potential for creating large-scale maps of the solar wind’s boundary with interstellar space, complementing what the Voyagers have done with their useful but necessarily limited spot measurements. Launch will be via a Pegasus XL rocket dropped from an Orbital Sciences L-1011 aircraft about 125 miles north of Kwajalein Atoll, in the Marshall Islands. The launch window opens at 1748 UTC (1348 EDT), with live coverage (no TV) to be provided via webcast available here. Streaming video and audio will begin at 1615 UTC (1215 EDT) and will conclude some twelve minutes after launch.