If we ended last week on a high note with the successful deployment of the IKAROS sail, this week started equally well with the return of JAXA’s Hayabusa spacecraft, whose re-entry capsule has now been recovered from the Australian desert and is intact. We’ll learn once it gets back to Japan how much material from asteroid Itokawa it was able to acquire. But what an exciting finish to this mission, and what a accomplishment by JAXA to survive battery failures, communications problems, engine issues and more and bring this mission home.

The canister return is the fruit of a seven year journey that saw Hayabusa touch down on Itokawa back in 2005, and although the many glitches caused a three year delay in its return, Hayabusa may well offer us at least trace amounts of material from the asteroid, valuable in helping us understand not only the asteroid itself but also the early history of the solar system. We have so few instances of material recovered from space — Moon rocks, cometary dust (from the Stardust mission), solar wind particles (Genesis), and whatever Hayabusa bears — and we may now have new samples that have changed little since the beginning of our solar system. The return canister now awaits preparation and transit to the Sagamihara curation facility in Tokyo.

Meanwhile, we also launch the work week with more news from CoRoT, which has detected six new exoplanets and one brown dwarf. CoRoT works by measuring the decrease in a star’s light caused by the transit of a planet across its face as seen by the spacecraft, a method doubly valuable because it allows a determination of the planet’s radius. Follow-up Doppler studies can then make a determination of the mass of the object, and with mass and radius known, the mean density of the planet can be derived. 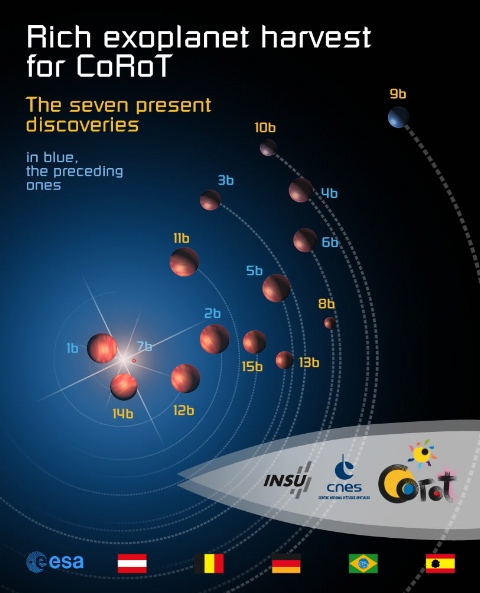 CoRoT’s new findings include CoRoT-8b, 70 percent of Saturn’s size and mass, and a string of ‘hot Jupiters’ — CoRoT-10b, CoRoT-11b, CoRoT-12b, CoRoT-13b and CoRoT-14b. The brown dwarf is CoRoT-15b, sixty times as massive as Jupiter. The extreme eccentricity of the orbit of CoRoT-10b sets it apart from the rest, while CoRoT-11b orbits a star that spins at a high rate. While our own Sun rotates approximately every 26 days, this star spins around its axis in less than two days. ESA’s Davide Gandolfi led the study of this world:

“This is the third exoplanet discovered around such a rapidly rotating star. Because of the fast rotation of its host star, such a planet could only have been discovered because it transits in front of it, thus only a transit-hunter, such as CoRoT, could have spotted it.”

CoRoT-11b represents deft work indeed, for a high rotational rate makes it difficult to achieve high-quality Doppler measurements that would reveal the presence of a planet. But the transit finding could then be corroborated by photometric and spectroscopic follow-up observations, allowing estimates of the planet’s mass — about twice that of Jupiter — and its radius, about 1.4 times that of Jupiter. Thus the transit technique (you can see the lightcurve below) allows us to home in on an exoplanet that Doppler studies alone wouldn’t have found, simply because the observational time required would have caused researchers to pick more likely targets. 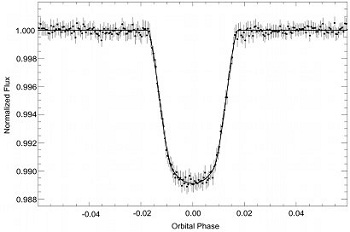 Among the other planets, CoRoT-8b is noteworthy in being the smallest planet yet discovered by the CoRoT team after CoRoT-7b, a transiting ‘super-Earth.’ CoRoT-10b is intriguing because its eccentric orbit causes the amount of radiation it receives from its star to vary tenfold in intensity in short order. Current estimates are that the planet’s surface temperature may increase from 250 to 600 degrees Celsius in the space of its year, which lasts 13 Earth days.

Image: Phase-folded lightcurve of the transit of CoRoT-11b, as derived by superimposing all the transits observed in the lightcurve. The best-fit model (thick line) is plotted on top of it. Credit: D. Gandolfi [Gandolfi et al, 2010].

An upcoming paper on this work is Gandolfi et al., “Transiting exoplanets from the CoRoT space mission XII. CoRoT-11b: a transiting massive ‘hot Jupiter’ in a prograde orbit around a rapidly rotating F-type star,” submitted to Astronomy and Astrophysics.

Previous post: Oort Finding: Many Comets From Other Stars