The Economics of a Space Infrastructure

Various accounts of what happened to Japan’s Akatsuki Venus orbiter continue to come in, but it seems clear that the craft failed to achieve orbit. Sky & Telescope has been keeping a close eye on things and reports that errant thruster firings evidently caused an unexpected rotation that resulted in an on-board computer putting the vehicle into standby mode. The result: Too short a burn to ensure orbital capture, with Akatsuki now in a solar orbit that won’t take it back to Venus for another seven years. Are course changes possible for another go then? We’ll see.

In an unaccustomed way, the Venus news has me in an inner system mode this morning, which means it’s probably a good time to talk about Dana Andrews’ thoughts on supply and demand when it comes to space colonization. Andrews (Andrews Space, Seattle) and colleagues Gordon Woodcock (Space America Inc.) and Brian Bloudek have been putting together a scenario for near-term commercialization of space, one that takes a hard-headed look at the economic drivers that humans need to make their presence beyond Earth sustainable.

A space-based infrastructure is the ultimate goal here, and if we ever build one, it will have to be because we’ve found a compelling reason to do so, one wrapped up in economics and, perhaps, species survival as we face dwindling resources. Andrews made the case at this year’s International Astronautical Congress in Prague that mining scarce resources on the moon and Near Earth Objects could be the key to commercial development that will become critical as we face future shortages. It will also offer us a chance to move past our dependence on oil:

Our hypothesis is that if we add lunar resources, we can afford to maintain the switch to plug-in hybrids throughout the world, thereby increasing productivity and reducing persistent pollution. Even though the flow of lunar resources is relatively small, these critical metals have a large impact on productivity, resulting in a potential soft landing for the world population.

What kind of resources are we talking about? Andrews enumerates quite a few, a list on which items like rhenium — used in fuel-efficient aircraft engines — stand out. The price of rhenium is now over $11,000 a kilogram, twelve times what it was just four years ago. Reserves of indium, which is used in solar cells and LCDs, are forecast to run out within ten years, and so is the hafnium we use in computer chips and nuclear control rods. Such shortages and accompanying price increases can be the driver for space commercialization. Andrews proposes moving the mining and smelting of key non-renewable resources to the Moon, providing access to high grade ores and transferring potentially polluting mining operations away from our planet.

So let’s look at space resources. Two-thirds of known meteorites are iron/nickel in composition, containing mostly iron but about 5-30 percent nickel and a few tenths of one percent cobalt, along with high concentrations (at least by standards on Earth) of strategic metals, from the platinum group to gold, gallium, germanium, iridium and others. Says Andrews:

Interestingly enough the lower the Fe-Ni metal content in the meteorite, the more enriched the Fe-Ni metal is in these rare and precious metals and elements. These elements readily dissolve into the metal that exists, and the less metal that exists, the less diluted they are. Many asteroids are richer in most of these precious metals than the richest Earth ores which we mine. Further, these metals all occur in one ore when it comes to asteroids, not in separate ores.

We don’t know how abundant rare Earth elements that can be mined actually are on the Moon, but Andrews wonders whether there are parallels between craters on the Earth and the Moon. The impact crater at Sudbury, Ontario is rich in iron, nickel, cobalt, copper and platinum group metals. Are these metals debris from an ancient impactor, or did they well up from within our planet after the impact? A study of impact craters on the Moon may give us some answers, for all asteroid impacts on the Moon should have left their debris on the surface, since the Moon lacks plate tectonics. What we need to learn is whether they are found there in concentrations we can mine.

What We Need to Know

Lunar prospecting, then, is a first step in determining the existence of asteroidal metal containing nickel, cobalt and platinum-group metals on the surface. We have much to learn, including not just the quality and location of ores, but also the location of volatiles like water. We also need to learn what happens when asteroidal nickel/iron is made into metal products, and to what extent we will have to rely on engineered alloys to get the desired result. At present, of course, we cannot test the processes we might use on the lunar surface, requiring a preliminary manned base there to work through these contingencies.

Andrews works out a simple cost model exploring mining, processing and shipping operations, comparing these to existing costs. With platinum, for example, selling at close to $40,000 per kilogram, a price that is itself escalating, the case for lunar mining is clearer than that for more plentiful products like cobalt. Even so, working in the lunar environment poses huge challenges:

Getting from Here to There

Andrews proposes a lunar sling for launching metal products to Earth, but goes into greater detail on what any space infrastructure requires going out of the gate: A simple and inexpensive way to get to Earth orbit, what he calls FRETOS — Fully Reusable Earth-to-Orbit Systems. A fleet of five launchers supporting a flight rate of 1000 launches per year using four tethers is at the heart of the proposal. On the space side, a Skyhook capture device located at 300 kilometers orbital altitude is part of a picture that also includes a Low Earth Orbit station at 1000 kilometers, a powered winch module at 1700 kilometers and a counter-balance at 2400 kilometers. The total mass of the space segment is estimated at 190 metric tons, including 2100 kilometers of tether lines, high-speed winches, power generation arrays, counter balances and station-keeping components, all to be launched separately and docked together for assembly. 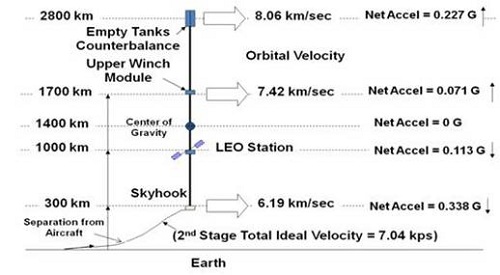 As for getting to orbit, the launch segment is envisioned as a first stage subsonic carrier/aircraft with onboard hybrid rocket motor to achieve altitude for release of a second stage at 12.6 kilometers, with the second stage delivering a 13-ton payload to the capture point at the bottom of the 2100 kilometer long tether system. After payload capture, the second stage re-enters and glides to a landing at the launch and recovery base. Andrews’ assessment is that the entire recovery, turn around, launch and tether lift cycle could be completed within 24 hours, which works out to 1000 missions a year with the proposed fleet of 5 launchers and four tethers.

To get equipment to the Moon, outgoing payloads are released from the tether every day or so and transported to a lunar transfer station at L1, where they are assembled into lunar lander packages and then delivered to individual mining sites or research centers. The L1 station also collects and processes propellants for lunar landers and, possibly, deep space exploration missions, its operations almost entirely automated but allowing for the presence of a small crew as needed.

Economics of the Infrastructure

Will it pay for itself? The economic model Andrews built of the entire infrastructure as operational over a twenty year period shows the cost of rare metals brought back to Earth at about $2600 per kilogram, an investment he notes is ‘fairly lucrative’ given current costs, and while a flow of materials from the Moon will lower the price, demand should also increase assuming we find momentum to reduce our use of fossil fuels, leaving a sizable potential for profit.

There is more detail in the paper than I can squeeze into this post, but I’m struck by a couple of things. Andrews is working on the practicalities involved in commercializing space, and in doing so points to a model that should be economically sustainable, and one that should produce a permanent human presence not only on the Moon but other space venues. We don’t often look at near-Earth issues on Centauri Dreams, but of course the development of a Solar System-wide infrastructure is more or less a given if we are ever to produce a true interstellar probe, one that will tap the expertise and resources that infrastructure has made available.

I’m also struck by the potential of tether methods for moving large payloads around near-Earth space, and reminded of Michel van Pelt’s book Space Tethers and Space Elevators (Springer 2009) as a great introduction and backgrounder for those of you unfamiliar with the variety of tether concepts out there. You’ll find my earlier thoughts on this book here. As Andrews makes clear in his paper, getting out of the gravity well at minimal expense (and he believes his methods, if fully operational, could drop that cost to $250 per kilogram) is step one in getting the needed infrastructure built. A profitable space market must grow to make it happen.

The paper is Andrews et al., “Space Colonization: A Study of Supply and Demand.” I’ll pass along the full reference when it’s published.