Yesterday I had just written about the role of luck in dark energy observations (in reference to Adam Riess’ discovery of an HST supernova image critical to the investigation), when news came in of another stroke of good fortune. This one involves not an astronomical observation but an actual spacecraft, the NanoSail-D solar sail demonstrator, thought to be moribund after it failed to eject from the FASTSAT satellite on which it had piggybacked its way into low-Earth orbit.

Now we learn that NanoSail-D ejected from FASTSAT on its own and was identified in telemetry yesterday afternoon (UTC), as determined by an analysis of FASTSAT data and later confirmed by ground-based tracking stations. If you’re a ham radio operator, NASA is encouraging you to listen for the NanoSail-D signal, which should be found at 437.270 MHz. Any reports should be sent to the NanoSail-D2 Mission Dashboard, where the welcome ‘NanoSail Ejected’ message is now up. The beacon is evidently operational and we’ll see how subsequent tracking goes.

A number of readers frustrated by NASA’s inability to explain NanoSail-D’s problems in greater detail have written in the past month to ask why the question of ejection was so mysterious. The answer is simple: We’re dealing with a CubeSat spacecraft, a vehicle equipped with the bare minimum in terms of telemetry. NanoSail-D is a terrific attempt to get a sail into space with the bare minimum of financial outlay, which is one reason I’ve been pulling so hard for its success. But flying on the cheap does pose problems when things go strangely awry. 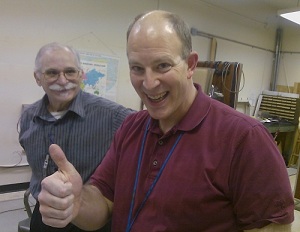 The Marshall Space Flight Center ham station has its own Web page, where the detection of the sail’s successful ejection and the reaction of principal investigator Dean Alhorn were reported in these terms:

Last month we were listening on 437.275 MHz, trying to confirm ejection of NanoSail-D from NASA’s FastSat. Nothing was heard, confirming that the sub-satellite had not separated. Time goes by. . . (just over a month actually) and as Wednesday afternoon comes around, Stan – N4PMF receives a request from Dean Alhorn to try listening again.

WB5RMG and N4PMF went to the club station and got ready for the 4:50 pm flyover. Shortly after Dean arrived we heard the first packet, and thought we were going to need to scrape Dean off the ceiling – he nearly exploded with joy.

Image: I have a hunch the MARS team won’t mind if I poach their photo of Dean Alhorn reacting to the reception of telemetry from NanoSail-D. Right now good vibes are in the air all over Huntsville. Credit: MSFC/MARS.

Bear in mind that the downlink on 437.275 MHz is critical. It’s the only link we have to the spacecraft, and MSFC is saying its battery will last for about three more days. Thus the need to collect telemetry from as many locations as possible. In addition to the above link, you can follow the sail’s fortunes via Twitter @NanoSailD. In the growing tradition of spacecraft tweets speaking in the first person singular, an overnight tweet from the NanoSail team read “I am still trying to figure out why FASTSAT finally let me go. Maybe it was tired of me hanging around?”

More on NanoSail-D, with real-time satellite tracking data, here. Based on earlier tweets from Huntsville, the sail deployment is now expected somewhere around 10 PM EST tonight (0300 UTC on the 21st). What a surprise to find all this happening after the long delay, but let’s cross our fingers that sail deployment proceeds as planned. Even for a sail of this relatively small size (32 square meters) and a fairly straightforward deployment procedure, getting the sail out there and catching photons is always going to be the most worrisome part of any sail mission.

Previous post: A Bracing Look at the Unseen Universe