Under a Sri Lankan Moon

Looking to put things into perspective? The recent Kepler illustration of the 1235 candidate planets thus far identified, each shown in transit, is something to revel in. The image, shown below, offers a sweeping look at the range of stellar sizes that accomodate planets, and bear in mind that these are the planets that by the luck of the draw happen to be visible in transit, a small percentage of the stars Kepler is able to look at. We clearly live in a galaxy that is swarming with planets. Be sure to click on the image to blow it up to full size so you can have a better view of the distant Kepler worlds. 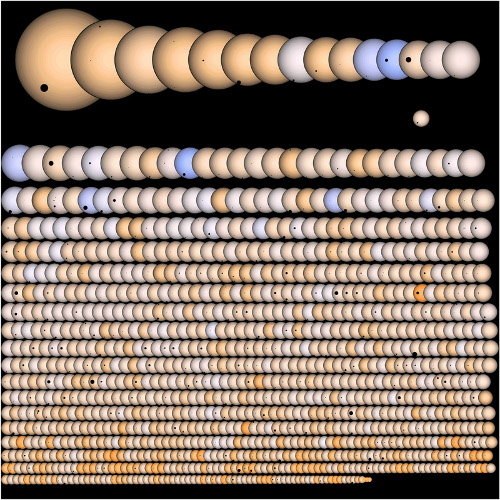 Image: Kepler monitors a rich star field to identify planetary transits by the slight dimming of starlight caused by a planet crossing the face of its parent star. Here all of Kepler’s planet candidates are shown in transit with their parent stars ordered by size from top left to bottom right. Simulated stellar disks and the silhouettes of transiting planets are all shown at the same relative scale, with saturated star colors. Of course, some stars show more than one planet in transit, but you may have to examine the picture at high resolution to spot them all. For reference, the Sun is shown at the same scale, by itself below the top row on the right. In silhouette against the Sun’s disk, both Jupiter and Earth are in transit. Credit: Jason Rowe / Kepler Mission.

Shaping a Life by Looking at the Sky

Sometimes an image can change a person’s future — who knows what budding scientist might see something like this and decide, early in his or her life, to embark on a career in astronomy? The things that shape our fortunes are often all but invisible to those around us. I was thinking about this while reading an essay by Ray Jayawardhana (University of Toronto) in the New York Times. The astrophysicist recalls walking as a child with his father in the family garden in Sri Lanka, and being told, as they looked at the Moon, that people had walked on its surface. The boy was astounded, and out of that wonderment grew a career. I couldn’t help but wonder what things I might have said to my own children that changed their direction, perhaps without my realizing it. I hope Jayawardhana’s father is still alive so he can read about his gift.

The essay is excerpted from Jayawardhana’s new book Strange New Worlds: The Search for Alien Planets and Life Beyond Our Solar System (Princeton University Press, 2011), which I’ll review in these pages as soon as I’ve finished it. Suffice it to say that an astrophysicist who is also an award-winning science writer knows how to write compellingly, as he does in this essay, musing on the schoolchildren of today and their sense of wonder when they see images from the surface of Mars or in orbit around Saturn. Ahead lie vistas of planets around other stars, places we can’t see but are slowly coming to understand.

I should qualify that by noting that we do have a few direct images of alien worlds, but we’re working toward something much better, space missions of the sort envisioned by Webster Cash, some of whose occulter designs offer the prospect of looking at a distant exoplanet closely enough to view its continents and seas. That technology may be further away financially than it is scientifically — once we commit to missions like these, we’re learning rapidly how to build them, and views like Cash talks about might be only a matter of two or three decades away if the budgetary situation weren’t so problematic. In any case, they’re certainly something that seems achievable in this century.

The Meaning of Life Elsewhere

Jayawardhana is interested in what happens when we detect signs of life from another world. We live in a culture where such detections are depicted as cataclysmic events, a momentous radio reception, or the landing of a spacecraft hostile or otherwise. But given the distances between the stars and the daunting problems of interstellar flight, Jayawardhana believes the discovery of life elsewhere will be slow and, perhaps, anything but sensational:

The evidence may be circumstantial at first — say, spectral bar codes of interesting molecules like oxygen, ozone, methane and water — and leave room for alternative interpretations. It may take years of additional data-gathering, and perhaps the construction of new telescopes, to satisfy our doubts. Besides, we won’t know whether such “biosignatures” are an indication of slime or civilization. Most people will likely move on to other, more immediate concerns of life here on Earth while scientists get down to work.

And if SETI finally scores a hit? That would indeed be a breakthrough moment, but what would likely follow would be decades of analysis as we tried to work out the contents of the message. In either case, the sheer knowledge that life can be found in a different part of the universe would mark a turning point in intellectual history. And the SETI detection, no matter through what form of SETI it could be achieved, would tell us that not only life but intelligence was observing the cosmos with us. These are the kinds of changes that make their way into a society’s philosophy, slowly but utterly transforming our perceptions long after the initial shock of discovery wears off.

I happen to be an optimist. It may take decades after the initial indications of alien life for scientists to gather enough evidence to be certain or to decipher a signal of artificial origin. The full ramifications of the discovery may not be felt for generations, giving us plenty of time to get used to the presence of our galactic neighbors. Besides, knowing that we are not alone just might be the kick in the pants we need to grow up as a species.

That’s a view that mirrors my own optimism, one that suggests that while we are impatient for immediate results, waiting a few decades to confirm that we are not alone is insignificant compared to how long our species has speculated on the question. Will we find evidence of life, and perhaps of intelligent life, within our own lifetimes? Nobody can know, but I’m all for the kind of speculation that Duncan Forgan and Martin Elvis engaged in in the paper we discussed yesterday. We need to be creative in looking for extraterrestrial intelligence. We need to think of Ray Jayawardhana’s father pointing at the Moon, and recall the sudden moments of astonished insight we’ve had in our own lives when suddenly our own personal cosmos snapped into focus.