Wild 2: Liquid Water Inside a Comet?

What goes on inside Kuiper Belt objects in the outer reaches of the Solar System? We can get some idea from what we’re learning about comets like Wild-2, dust grains of which were brought back to Earth in 2006 as part of the Stardust mission. The thinking about Wild-2 is that, like many comets, it originated in the Kuiper Belt out of icy debris left over from the formation of the Solar System. But its orbit was eventually disrupted by Jupiter’s gravitational influence on a pass through the inner system, sending the comet into a new, highly elliptical orbit. 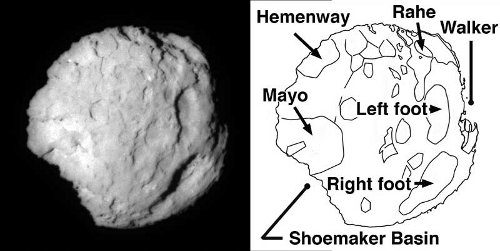 Image: Comet Wild 2, which NASA’s Stardust spacecraft flew by on Jan. 2, 2004. The picture on the left is the closest short exposure of the comet. The listed names on the right are those used by the Stardust team to identify features. “Basin” does not imply an impact origin. Credit: NASA/Stardust mission.

Now analysis of Wild-2’s dust grains is changing our view of cometary interiors. A new study by Eve Berger and Dante Lauretta (University of Arizona) points to liquid water inside the comet at some point in its history, casting doubt on the idea that cometary ice is always in a terminal state of deep freeze. Berger and Lauretta found minerals in the dust grains, minerals that form in the presence of liquid water. Lauretta, principal investigator for the study, had this to say:

“When the ice melted on Wild-2, the resulting warm water dissolved minerals that were present at the time and precipitated the iron and copper sulfide minerals we observed in our study. The sulfide minerals formed between 50 and 200 degrees Celsius (122 and 392 degrees Fahrenheit), much warmer than the sub-zero temperatures predicted for the interior of a comet.”

Lauretta is quick to note that the existing paradigm assumes liquid water cannot form inside a comet, so the finding is a surprise. The mineral in question is cubanite, a copper iron sulfide that can also be found in ore deposits on Earth that have been exposed to heated groundwater. The cubanite also gives us a read on temperatures within Wild-2, says Berger:

“The mineral we found – cubanite – is very rare in sample collections from space. It comes in two forms – the one we found only exists below 210 degrees Celsius (99 degrees Fahrenheit). This is exciting because it tells us those grains have not seen temperatures higher than that. Wherever the cubanite formed, it stayed cool. If this mineral formed on the comet, it has implications for heat sources on comets in general.”

So the evidence is that at some point, the interior of Wild-2 would have been warm enough to melt ice, but cool enough to form the detected cubanite. Two possible heat sources are available, the first being collisions with other objects, which could generate water that would allow the sulfides to form relatively quickly. The other possibility is radioactive decay which, as opposed to the collision method, would point to early formation of the minerals because the radioactive nuclides would decay over time and the heat source would be lost. In any case, we’re learning that heating and chemical reactions in liquid water can be part of a comet’s ongoing evolution.

No wonder Lauretta talks about comets ‘as individual entities with their own unique geologic history.’ Are the processes that evidently occurred within Wild-2 common to all comets? We have but one sample return mission’s results to go on, but it’s clear that getting our hands on materials from deep space objects can change the paradigm decisively. Lauretta, who is part of the development of the proposed OSIRIS-REx asteroid sample return mission, notes that flybys or remote observation cannot produce this kind of detection. OSIRIS-REx would follow the Stardust model by returning up to 2 kg of asteroid regolith to Earth, if the mission is approved.

The paper is Berger et al., “Evidence for aqueous activity on comet 81P/Wild 2 from sulfide mineral assemblages in Stardust samples and CI chondrites,” in press at Geochimica et Cosmochimica Acta (abstract). A University of Arizona news release is also available.

Next post: Stable Orbit for a Newly Discovered Companion