Andreas Tziolas, current leader of Project Icarus, gave a lengthy interview recently to The Atlantic’s Ross Andersen, who writes about starship design in Project Icarus: Laying the Plans for Interstellar Travel. Icarus encounters continuing controversy over its name, despite the fact that the Icarus team has gone to some lengths to explain the choice. Tziolas notes the nod to Project Daedalus leader Alan Bond, who once referred to “the sons of Daedalus, perhaps an Icarus, that will have to come through and make this a much more feasible design.”

I like that sense of continuity — after all, Icarus is the follow-on to the British Interplanetary Society’s Project Daedalus of the 1970s, the first serious attempt to engineer a starship. I also appreciate the Icarus’ team’s imaginative re-casting of the Icarus myth, which imagines a chastened Icarus washed up on a desert island planning to forge wings out of new materials so he can make the attempt again. But what I always fall back on is this quote from Sir Arthur Eddington which, since I haven’t run it for two years, seems ready for a repeat appearance:

In ancient days two aviators procured to themselves wings. Daedalus flew safely through the middle air and was duly honoured on his landing. Icarus soared upwards to the sun till the wax melted which bound his wings and his flight ended in fiasco. The classical authorities tell us, of course, that he was only “doing a stunt”; but I prefer to think of him as the man who brought to light a serious constructional defect in the flying-machines of his day. So, too, in science. Cautious Daedalus will apply his theories where he feels confident they will safely go; but by his excess of caution their hidden weaknesses remain undiscovered. Icarus will strain his theories to the breaking-point till the weak joints gape. For the mere adventure? Perhaps partly, this is human nature. But if he is destined not yet to reach the sun and solve finally the riddle of its construction, we may at least hope to learn from his journey some hints to build a better machine. 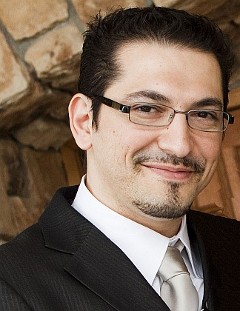 I love the bit about straining theories to the breaking point, and also ‘hints to build a better machine.’ Anyway, those unfamiliar with the Icarus project can use the search engine here to find a surfeit of prior articles, or check the Icarus Interstellar site for still more. You’ll also get the basics from the Andersen interview, which goes into numerous issues, not least of which is propulsion. Tziolas notes that Project Icarus has focused on fusion, although ‘the flavor of fusion is still up for debate.’ Seen as an extension of the Daedalus design, fusion is a natural choice here, because what Icarus is attempting to do is to re-examine what Daedalus did in light of more modern developments. But the He3 demanded by Daedalus is a problem because it would involve a vast operation to harvest the He3 from a gas giant’s atmosphere.

As the team studies fusion alternatives, other options persist. Beamed propulsion strikes me as a solid contender if you’re in the business of starship design in a world where sustained fusion has yet to be demonstrated in the laboratory, much less in the tremendously demanding environment of a spacecraft. We’ve already had solar sails deployed, the Japanese IKAROS being the pathfinder, and laboratory work has likewise demonstrated that beamed propulsion via microwave or laser can drive a sail. But beam divergence is a problem, which is why Robert Forward envisioned giant lenses in the outer system demanding a robust space manufacturing capability. So the dismaying truth is that at present, both the fusion and beamed sail options look to be not only beyond our engineering, but well beyond the wildest dreams of our budgets.

Where we are clearly making the most progress in interstellar terms is in the choice of a destination. Obviously, we lack a current target, but within the next two decades it is well within our capabilities to launch the kind of ‘planet-finder’ spacecraft that can not only home in on an Earth analogue around another star but also study its atmosphere. It would be all to the good if we found that blue and green world we’re hoping for orbiting a nearby system like Centauri B, but we’re going to be learning very soon (depending on what gets budgeted for and when) which nearby stars have planets that might be suitable targets. Icarus is not just looking for any old rock — the goal is to design a craft that could reach a world that could be habitable for humans. 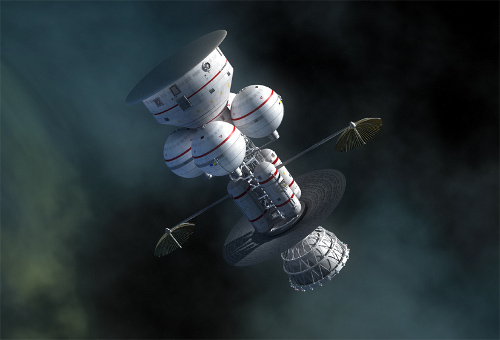 Image: One vision of the Icarus craft, by the superb space artist Adrian Mann.

Why that criterion? Survival of the species is a serious interstellar motivation. Tziolas asks whether, if humanity becomes capable of going to the stars and chooses not to, it wouldn’t deserve a Darwin Award, the kind of achievement that marks its recipient as doomed. But motivations cover a wide range. I’ve written about the human urge to explore on many occasions, and Tziolas talks about pushing back technological boundaries as another prime driver. Hard problems, in other words, drive us to push the envelope in terms of solutions:

In order to achieve interstellar flight, you would have to develop very clean and renewable energy technologies, because for the crew, the ecosystem that you launch with is the ecosystem you’re going to have for at least a hundred years. With our current projections, we can’t get this kind of journey under a hundred years. So in developing the technologies that enable interstellar flight, you could serendipitously develop the technologies that could help clean up the earth, and power it with cheap energy. If you look toward the year 2100, and assume that the 100 Year Starship Study has been prolific, and that Project Icarus has been prolific, at a minimum we’d have break-even fusion, which would give us abundant clean energy for millennia. No more fossil fuels.

And let’s not forget ongoing miniaturization, also a prime player in any starship technology:

We’d also have developed nanotechnology to the point where any type of technology that you have right now, anything technology-based, will be able to function the same way it does now, but it won’t have any kind of footprint, it will only be a square centimeter in size. Some people have characterized that as “nano-magic,” because everything around you will appear magical. You wouldn’t be able to see the structures doing it, but there would be light coming out of the walls, screens that are suspended that you can move around any surface, sensors everywhere — everything would be extremely efficient.

This is a lively and informative interview, one that circles back to the need to drive a shift in cultural attitudes as a necessary part of any long-haul effort. Some of this is simply practical — the creative souls who volunteered their engineering and scientific skills on Daedalus are retiring and some have already passed away. A new design requires a new generation of interstellar engineers, one recruited from that subset of the population that continues to take the long view of history, acknowledging that without the early and incremental steps, a great result cannot occur.

Previous post: FTL Neutrinos: Closing In on a Solution