It’s good to see that David Kipping’s work on exomoons is back in the popular press in the form of A Harvest of New Moons, an article in The Economist. Based at the Harvard-Smithsonian Center for Astrophysics, Kipping’s Hunt for Exomoons with Kepler (HEK) culls Kepler data and massages the information, looking for the tug of large moons on transiting exoplanets. The basic method will by now be familiar to Centauri Dreams readers: 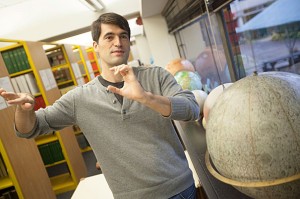 Dr Kipping’s technique relies on the fact that moons do not simply revolve around their host planets; planets also revolve around their moons—or, rather, the two bodies both revolve around their common centre of mass. If a planet is large and its moon small the distinction is trivial. But if the planet is small and the moon is large, it is not. In the case of Earth and its moon, for example, the common centre lies only around 1,700km (1,100 miles) beneath the Earth’s surface. Someone looking from afar at the movement of Earth would thus be able to deduce the moon’s existence without having to see it directly.

And as we’ve discussed in previous articles, the need for a large moon is significant. Kipping has recently reckoned that a moon about one-fifth as massive as the Earth should be in range of detection, but Ganymede, the biggest moon in our Solar System, is only 1/40th as massive. The first exomoon detected, then, will likely be a very large object, big enough that its signal won’t be masked by the presence of other planets in the same system. I’ve always had a fascination with exomoon studies and thus am looking forward to the first presentation and data analysis by the HEK team, slated to occur at the American Astronomical Society meeting in January.

But I want to focus in on something else in this article, namely the work of Mary Anne Peters and Edwin Turner, who have asked in a recent paper whether a large enough exomoon orbiting close enough to its planet (and far enough from its star) might produce an infrared signature detectable from Earth. Think Io, and ponder how tidal heating churns the insides of such a moon, creating heat-generating friction and, in the case of Io, active volcanoes.

Peters and Turner, both at Princeton, produce an acronym I had never encountered before: THEMs, or Tidally Heated Exomoons. In terms of direct imaging, a THEM is quite interesting. For one thing, a tidally heated moon may remain hot and bright for the lifetime of its star, making it visible in solar systems both old and young. For another, such a moon may orbit its planet far away from the primary star while remaining hot because of tidal heating. It is thus a luminous target at a large separation from the star whose light would otherwise drown out its signal.

The researchers calculate that tidal heating could produce terrestrial-planet-sized moons with effective temperatures as high as 1000 K, moons as much as 0.1% as bright as the system’s primary (if the central star were low in mass). This is interesting stuff: Io has the highest measured temperatures of any body in the outer Solar System because of the tidal heating effect. Now imagine the system of Galilean moons orbiting Jupiter were scaled down to orbit Neptune in more or less the same configuration. If this were the case, Io would be more luminous than Neptune itself, and if it were as massive and dense as the Earth, the authors say it would be the brightest Solar System object beyond 5 AU, outshining even Jupiter at some wavelengths.

Given all this, there is a case to be made that tidally heated exomoons may actually be easier targets for direct imaging than the kind of hot, young gas giants at large separations from their star that are most likely to be found by current imaging efforts:

Direct imaging detection of physically plausible, tidally heated exomoons is possible with existing telescopes and instrumentation. If tidally heated exomoons are common, for example if typical gas giant exoplanets are orbited by satellite systems broadly similar to those found in the Solar System, we are likely to be able to image them around nearby Sun-like stars in the midst of their main sequence lifetimes with current or near future facilities.

The paper suggests that existing instruments can detect exomoons at temperatures of 600 K or above and radii of Earth-size or larger, while future mid-infrared space telescopes like the James Webb Space Telescope will be able to directly image heated exomoons with temperatures greater than 300 K and radii of Earth size and larger as long as they are orbiting at 12 AU or more from their star. Perhaps we’ve imaged our first exomoon already: The authors think it is possible that Fomalhaut b, whose identity as a planet remains controversial, is actually a tidally heated exomoon, or a blend of the emissions from a hot, young gas giant and a heated moon.

In one figure, the researchers look at the performance of JWST’s Mid-Infrared Instrument (MIRI), charting exomoons with temperatures similar to those found on Earth. The results:

…it is plausible that some of the exomoons JWST is capable of detecting, could potentially be habitable, in the sense of having surface temperatures that would allow liquid water to be present. Some of these exomoons have comparable irradiance to the gas giants in our solar system. At ~ 14µm and 300K, an Earth-radius exomoon would be as luminous as Jupiter. However, if [the] Jupiter were colder due to being less heated by its primary and/or being older, the Earth-like moon would be much brighter than the planet.

The paper is Peters and Turner, “On the Direct Imaging of Tidally Heated Exomoons” (preprint).