In Search of Carbon Planets

The first generation of stars in the universe began to shine in an era when chemical elements like carbon and oxygen were not available. It was the explosion of these early stars in supernovae that began the process of enrichment, with heavier elements fused in their cores now spreading into the cosmos. Lower-mass stars and planetary systems began to appear as heavier elements could form the needed dust grains to build planetary cores.

Avi Loeb (Harvard-Smithsonian Center for Astrophysics) and grad student Natalie Mashian have been looking at a particular class of ancient stars called carbon-enhanced metal-poor (CEMP) stars. Here the level of iron is about one hundred-thousandth as high as our Sun, a clear marker that these stars formed before heavy elements were widely distributed. These stars are interesting because despite their lack of iron and other heavy elements in comparison to the Sun, they are rich in carbon, an excess that leads to the possibility of planets forming around them out of clumping carbon dust grains.

The new paper on this work looks at the possibility of carbon planet formation, pointing to early work that has simulated such planets, and observational indications of planets with carbon-rich atmospheres (WASP-12b) and carbon-rich interiors (55 Cancri e). If they’re out there, finding such planets — made of graphite, carbides and diamond — around CEMP stars could be a productive exercise. “These stars are fossils from the young universe,” explains Loeb. “By studying them, we can look at how planets, and possibly life in the universe, got started.” 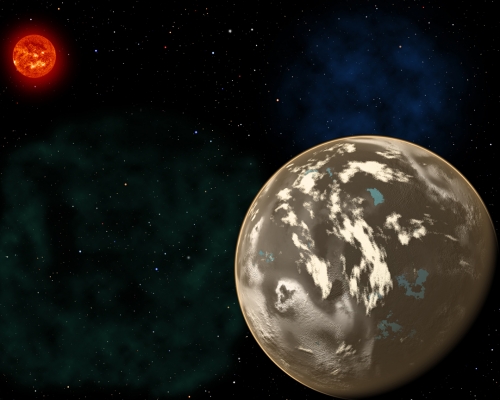 Loeb and Mashian point out that the planetary system with the lowest metallicity we’ve yet detected is around the K-class star BD+20 24 57, which shows levels of metals below what was once considered the critical value for planets to form. While CEMP stars are extremely iron-deficient, their carbon abundances make the formation of solid carbon exoplanets a real possibility. Differentiating them from water or silicate worlds could be difficult, but the paper argues that spectral studies of planetary atmospheres could supply the needed markers:

At high temperatures (T ≳ 1000 K), the absorption spectra of massive (M ∼ 10 – 60 M⊕) carbon planets are expected to be dominated by CO, in contrast with the H2O-dominated spectra of hot massive planets with solar-composition atmospheres (Kuchner & Seager 2005). The atmospheres of low-mass (M ≲ 10 M⊕) carbon planets are also expected to be differentiable from their solar-composition counterparts due to their abundance of CO and CH4, and lack of oxygen-rich gases like CO2, O2, and O3 (Kuchner & Seager 2005).

So carbon monoxide and methane in the atmosphere could help us tell carbon worlds of similar mass and physical size apart from iron and silicate worlds like the Earth. Detecting carbon planets around ancient stars could provide us with a window into planet formation in the early universe, with implications for where life could form. The paper calls for an observational program using transit methods to search for planets around CEMP stars. Says Mashian:

“This work shows that even stars with a tiny fraction of the carbon in our solar system can host planets. We have good reason to believe that alien life will be carbon-based, like life on Earth, so this also bodes well for the possibility of life in the early universe.”

The paper is Mashian and Loeb, “CEMP stars: possible hosts to carbon planets in the early universe,” accepted at Monthly Notices of the Royal Astronomical Society (preprint).