What We Are Trying to Find

What is it we are looking for when we probe nearby planetary systems? Certainly the search for life elsewhere compels us to find planets like our own around stars much like the Sun. But surely our goal isn’t restricted to finding duplicate Earths, if indeed they exist. A larger goal would be to find life on planets unlike the Earth — perhaps around stars much different from the Sun — which would give us some idea how common living systems are in the galaxy.

And beyond that? The ultimate goal is simply to find out what is out there. That takes in outcomes as different as widespread microbial life, perhaps leading to more complex forms, and barren worlds in which life never emerged. A galaxy filled with life vs. a galaxy in which life is rare offers us two striking outcomes. We ignore preconceptions to find out which is true. 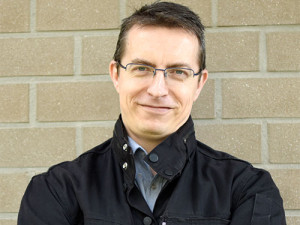 Let’s try to put Proxima Centauri’s recent flare, discussed yesterday, in context. Events like this highlight our doubts about the viability of red dwarf systems in developing life. Flares are not uncommon on ultra-cool dwarf stars, meaning nearby planets in any habitable zone (as defined by liquid water at the surface) would be bathed in ultraviolet and X-rays. We face the distinct possibility that such planets might have never become habitable in the first place, their oceans vaporized, their atmospheres hopelessly compromised.

I’m interested to see how Amaury Triaud and Michaël Gillon see things. It was their team at the University of Liège in Belgium and the University of Cambridge that did the initial work on TRAPPIST-1, a red dwarf around which ultimately seven planets were found to orbit. As the scientists point out in a recent essay for Big Think, three of the planets here are intriguing from the standpoint of habitability, and we’ve recently seen new work on their potential atmospheres.

This is what is so exciting about red dwarfs. While we continue to look for rocky worlds around G-class stars, we’re putting the tools for studying red dwarf planets to use right now. Consider what we’ve learned already: TRAPPIST-1 d, e and f do not show signs of puffy atmospheres rich in hydrogen, which goes a long way toward eliminating them as Neptune-like worlds, and leaves open the issue of more compact atmospheres that could sustain life. We’ve also had a fine-tuning of mass estimates (see TRAPPIST-1: Planets Likely Rich in Volatiles). Thus a star producing a scant 0.05 percent as much light as the Sun is beginning to yield its secrets.

Triaud and Gillon look at the path forward, pointing to atmospheric work with the James Webb Space Telescope. It’s clear they have little patience with those content to rule out habitability without a great deal of further evidence. The arguments they examine are familiar: Planets around such stars may be tidally locked, and indeed, in systems like TRAPPIST-1, so tightly packed that they would produce major instabilities. They acknowledge the flare problem Proxima Centauri has so vividly demonstrated.

But what we are dealing with is a set of unknowns, and the exciting thing is that we are closing in on the ability to produce answers to many of these objections. From the essay:

Far from holding us back, those arguments motivated us. Now we can assess the actual conditions, and explore counter-arguments that Earth-sized planets around stars such as TRAPPIST-1 might in fact be hospitable to life. Oceans and thick atmospheres could mitigate the temperature contrast between day and night sides. Tidal interaction between close-orbiting planets might provide energy for biology. Some models suggest that planets forming around ultra-cool dwarfs start out with much more water than Earth has. Ultraviolet radiation could help to produce biologically relevant compounds… We are optimistic.

It’s the nature of that optimism that we need to explore. For Triaud and Gillon are not overlooking the problems of astrobiology here to insist on a result they want to see. Instead, they’re pointing to a demonstrable fact: In our rush to find a ‘twin’ of the Earth, we sometimes forget that our planet is not necessarily the template for life elsewhere. Indeed, searching for an Earth twin is a highly conservative approach. “Research should be about finding what we don’t already know,” they argue, and in the case of exoplanets, that certainly encompasses the nature of the 75 percent of the galaxy comprised of red dwarfs down to tiny ultra-cool stars. 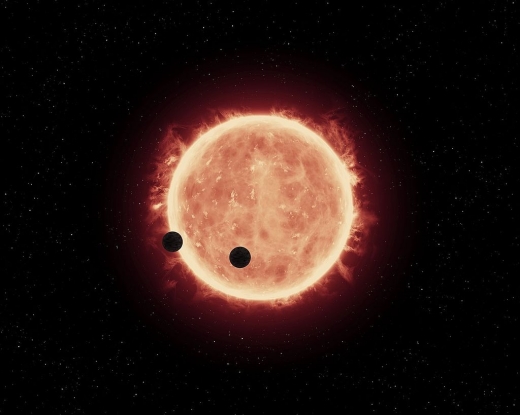 Image: This artist’s impression shows two Earth-sized worlds passing in front of their parent red dwarf star, which is much smaller and cooler than our Sun. Astronomers using the Hubble instrument recently used transmission spectroscopy, in which starlight passes through potential atmospheres of planets, to look for evidence of extended hydrogen atmospheres around several TRAPPIST-1 planets. The lack of such atmospheres makes it unlikely that these worlds are Neptune-like. Image credit: ESA/Hubble.

If we’re looking for life elsewhere in the universe, we have only to consider the range of planetary systems thus far discovered to know that we need to study systems utterly unlike our own. The goal then, as the authors put it, is to measure the total frequency of biology. That makes red dwarfs an obvious target, particularly when, like TRAPPIST-1, nearby examples offer such deep transits, so much more amenable to current study than Earth-sized worlds transiting G-class stars like our Sun. Indeed, a TRAPPIST-1 transit can be 80 times more prominent, with like gains in the visibility of atmospheric chemistry.

So while we continue to search for a true Earth analog around a star like the Sun, we can put nearby red dwarf planets under immediate investigation, with TRAPPIST-1 transits happening in a matter of days or weeks rather than once a year. The nature of their atmospheres is the first priority, helping us decide what surface conditions may be like. The search for biosignatures of biologically produced gases follows, with the added advantage at TRAPPIST-1 in having so many planets that can be directly compared to each other.

The TRAPPIST (Transiting Planets and Planetesimals Small Telescopes) facility we used to find the TRAPPIST-1 planets was just the prototype of a more ambitious planet survey called SPECULOOS (Search for habitable Planets Eclipsing Ultra-Cool Stars), which has already begun operations. We expect to find many more Earth-sized, rocky planets around dwarf stars within the next five years. With this sample in hand, we will explore the many climates of such worlds. The solar system contains two: Venus and Earth. How many different types of environments will we discover?

If red dwarf planets near us are shown to be devoid of life, we may eventually learn that life is rarer than we thought. But I return to my earlier sentiment — at heart, our goal in studying the universe isn’t to find life, but rather to find what is out there. If we were to learn that life is vanishingly rare, that would be a finding of immense significance for our stewardship of our own planet, teaching us how unusual it may in fact be. In any case, while we all have ideas about what we hope to find, the universe will surely keep forcing us to adjust our expectations.