My doctor is a long-time friend who always stops during my annual physical to ask about what’s going on in the hunt for exoplanets. Last week he surprised me when, after I had described ways of analyzing a transiting planet’s atmosphere, he asked whether planets could give rise to civilizations in different epochs. Why just one, in other words, given that homo sapiens has only been around for several hundred thousand years? Our technological civilization is a very recent, and to this point a short-lived phenomenon. Were there others?

I was startled because Adam Frank (University of Rochester) and Gavin Schmidt (NASA Goddard Institute for Space Studies) have recently raised a stir with a paper on what they call the ‘Silurian Hypothesis,’ the name deriving from a Doctor Who TV episode referencing intelligent reptiles called Silurians who come to life when accidentally awakened. As the authors point out in their paper:

We are not however suggesting that intelligent reptiles actually existed in the Silurian age, nor that experimental nuclear physics is liable to wake them from hibernation. Other authors have dealt with this possibility in various incarnations (for instance, Hogan (1977), but it is a rarer theme than we initially assumed.

True enough, although it does pop up in science fiction from time to time. I’m remembering a 1989 tale from Barry Longyear that involved a fleet of starships returning to their home world to find that it is now being managed by humans. The starship crews — essentially intelligent dinosaurs — have been gone 70 million years, their civilization long obliterated on their home world. The novel Frank and Schmidt reference is James Hogan’s Inherit the Stars, in which evidence of an unknown early human technology is found on the Moon. Maybe readers can supply some other stories involving civilizations from deep time.

Digging Out the Evidence

Frank comes to this topic as a natural outgrowth, I think, of his earlier investigations of how industrial civilizations affect their home planets. All this involves issues of sustainability and climate alteration, using dynamical systems theory as a methodology to examine how species with energy-intensive technology alter planetary evolution (you can read more about this in my Astrobiology and Sustainability). Does an industrial civilization invariably cause detectable climate shift? Gavin Schmidt jogged Frank’s thinking on the topic by bringing up the question of prior civilizations, which raised the issue of just how we might detect such a culture. 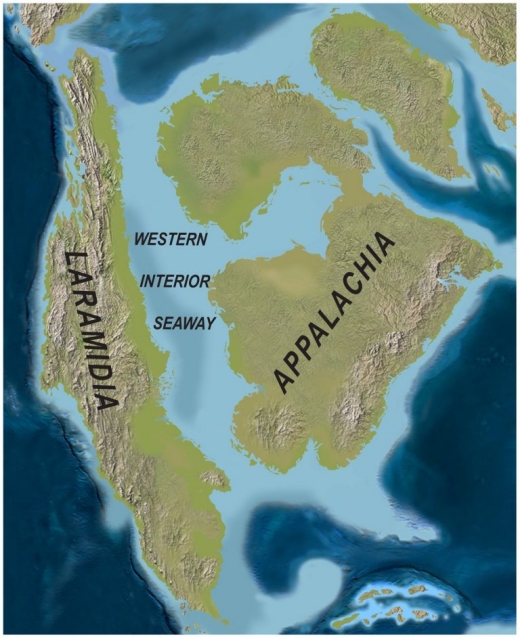 Image: The inland seas in North America (Western Interior Seaway) and Europe had receded by the beginning of the Paleocene, making way for new land-based flora and fauna. If an early mammal had produced a civilization in this era, would we be able to find traces of it? Credit: Paleontology World.

We’re talking non-human cultures if we go back far enough, and with the passage of hundreds of millions of years, evidence becomes more than a little problematic. Frank has just written a piece for The Atlantic that pulls out the major themes of the paper. Was There a Civilization On Earth Before Humans? puts the matter succinctly. Because when you talk about direct evidence of an industrial civilization, we’re dealing with a geologic record that makes it all but impossible to probe past the Quaternary period, some 2.6 million years ago.

We can obviously study earlier eras, but as the authors point out, the largest extant surface area is in the Negev Desert, in southern Israel, which can take us back 1.8 million years. Earlier than the Quaternary, we rely on exposed surfaces unearthed through excavation, drilling or mining, while our study of ocean sediments faces the fact of recycling ocean crust, so that our evidence is for periods that post-date the Jurassic; i.e., we can go back some 170 million years.

This gets seriously intriguing, and I found myself reading The Atlantic piece and the original paper (citation below) with a compulsive fascination, maybe because when I was a kid, I used to think about becoming a paleontologist, digging up the remains of creatures from the days of the brontosaurus. But how much of that past world can we recover given how sparse the fossil record is? For Frank and Schmidt point out how little of life is captured this way. From the paper;

The fraction of life that gets fossilized is always extremely small and varies widely as a function of time, habitat and degree of soft tissue versus hard shells or bones (Behrensmeyer et al., 2000). Fossilization rates are very low in tropical, forested environments, but are higher in arid environments and fluvial systems. As an example, for all the dinosaurs that ever lived, there are only a few thousand near-complete specimens, or equivalently only a handful of individual animals across thousands of taxa per 100,000 years. Given the rate of new discovery of taxa of this age, it is clear that species as short-lived as Homo Sapiens (so far) might not be represented in the existing fossil record at all.

The survival of actual objects produced by such a civilization — think the Antikythera Mechanism from ancient Greece — is unlikely indeed. Our species has left countless artifacts that have yet to be recovered, if they ever will be. On a wider scale, we are learning much about detecting the effects of civilizations on the landscapes around them (here I think of aerial surveys finding building sites or burial mounds), but Frank and Schmidt note that the current rate of urbanization is less than one percent of the Earth’s surface. We don’t know where to look, and the likelihood of finding direct evidence of artifacts is remote in the extreme.

Would we know it, then, if an early mammal built a civilization in the Paleocene (60 million years ago)? Let’s assume a civilization lasting no more than 100,000 years, which turns out to be 500 times longer than our own civilization to this point. You would think that specific markers of industrial acthttps://arxiv.org/abs/1804.03748ivity would get through — these would include, perhaps, plastics, which seem to live forever. They do break down eventually, as the authors note, but the results are unclear:

The densification of small plastic particles by fouling organisms, ingestion and incorporation into organic ‘rains‘ that sink to the seafloor is an effective delivery mechanism to the seafloor, leading to increasing accumulation in ocean sediment where degradation rates are much slower (Andrady, 2015). Once in the sediment, microbial activity is a possible degradation pathway (Shah et al., 2008) but rates are sensitive to oxygen availability and suitable microbial communities. As above, the ultimate long-term fate of these plastics in sediment is unclear, but the potential for very long term persistence and detectability is high.

We might likewise find evidence like increased concentrations of metals. Maybe our relentless production of electronics will leave a trace in the concentration of rare-Earth elements in sediments for some successor species to identify. Of course, we can’t be comfortable about generalizing from our own activities to those of some hypothetical primeval civilization, but there is room for speculation nonetheless, and Frank and Schmidt look hard at fossil fuels, the burning of which releases carbon into the atmosphere, causing the balance of carbon isotopes to shift in what atmospheric scientists call the ‘Suess effect,’ a change in isotope ratios of carbon that is readily traced in the last century.

We do see ‘spikes’ in the geological record, though none that are ‘spiky enough’ to fit into the hypothesis of a Silurian civilization. Using our own ‘Anthropocene’ era as a guide, we are seeing a huge increase in atmospheric carbon levels much unlike the slower spikes of the Paleocene-Eocene Thermal Maximum (PETM), when the planet’s average temperature rose well above what we have today. Those much earlier spikes (56 million years ago) took hundreds of thousands of years to play out. A civilization’s signal in terms of carbon output is, at least judging from our own, much more sudden, though we have yet to learn how it will end.

We can’t rule out detection methods that could trace extremely short-lived events in ancient sediments, the authors conclude, but they would be extraordinarily hard to detect. Frank and Schmidt don’t believe any such civilization existed, but their paper asks a broader question that is relevant to exoplanet studies. What kind of effects does the collection of energy for building a civilization leave on its home world? Assuming there is feedback into planetary systems, we may be able to build a set of markers that could help us identify the process at work.

As Frank concludes in his Atlantic essay:

…our work also opened up the speculative possibility that some planets might have fossil-fuel-driven cycles of civilization building and collapse. If a civilization uses fossil fuels, the climate change they trigger can lead to a large decrease in ocean oxygen levels. These low oxygen levels (called ocean anoxia) help trigger the conditions needed for making fossil fuels like oil and coal in the first place. In this way, a civilization and its demise might sow the seed for new civilizations in the future.

Cycles of civilizations could thus occur, even if we have no evidence that they have previously taken place on Earth. The broader question is whether we can deduce a set of maxims telling us how biospheres evolve, and how the activities of their societies re-shape their world. Again we are seeding the debate over differing kinds of biosignatures and technosignatures that will inform our studies of the data gathered by the next generation of space and ground instruments.

The paper is Schmidt and Frank, “The Silurian Hypothesis: Would it be possible to detect an industrial civilization in the geological record?” published online by the International Journal of Astrobiology 16 April 2018 (abstract / preprint).