The Habitable Zone: The Impact of Methane

The definition of a habitable zone is under constant refinement, an important line of research as we choose which exoplanets to focus on in our search for life. Centauri Dreams regular Alex Tolley today looks at the question as it involves the presence of methane. With planetary warming already known to vary depending on the spectral type of the host star, we now learn that the presence of methane can produce thermal inversions and surface cooling on M-star exoplanets, impacting the outer limits of the habitable zone. The work of Ramses Ramirez (Tokyo Institute of Technology) and Lisa Kaltenegger (Carl Sagan Institute, Cornell University), the paper also suggests a possible biosignature near the outer habitable zone edge of hotter stars, one of several results that Alex explores in today’s essay.

As noted in previous posts on biosignatures, especially in regards to life prior to photosynthetic oxygenation of the atmosphere, methane (CH4) is a gas that appears early due to prokaryotic methanogens producing it at rates far higher than geological processes and sustaining its presence despite the chemical destruction. The presence of CH4 in a primordial N2-CO2-H2O atmosphere has been suggested as a component of a biosignature (Detecting Early Life on Exoplanets).

Which leads to the obvious question. As CH4 is a potent greenhouse gas, does it impact the size of the habitable zone (HZ), particularly its outer edge, which is usually defined by the greenhouse gas CO2? This is exactly the question that Ramirez and Kaltenegger try to answer in a new paper. Using their prior approach of assuming a rocky, Earth-like world around different star types, they approach the problem of modeling the effect of the star’s emission on the planet’s atmosphere with varying mixing ratios of CH4 from 10-100,000 ppm.

The authors have previously shown that the spectra of the star impact the warming of a planet [4, 5]. As the spectrum shifts towards the red, the warming efficiency increases. Because CH4, unlike CO2 and H2O, has strong absorption in both the infrared (IR) and near-infrared (NIR), this spectral shift has an even more pronounced effect when CH4 is an atmospheric component gas. For exoplanets with CH4 in their atmospheres around cool stars, the absorption occurs in the upper atmosphere, causing a thermal inversion and cooling the surface. Figure 1 shows the atmospheric temperature profile with altitude when 1% (10,000 ppm) of CH4 is added to a 3 bar atmosphere of CO2 for three star types: F0, our G-type sun, and M3. For both the F0 and G stars, the CH4 increases the surface temperature.20-30K. However, for the M3 star, the surface temperature is reduced by 30K as much of the energy is already absorbed at high altitude. Unlike most atmospheres, exoplanets around M-stars with a CH4 component have a temperature inversion. This has a direct effect on the outer limit of the HZ. 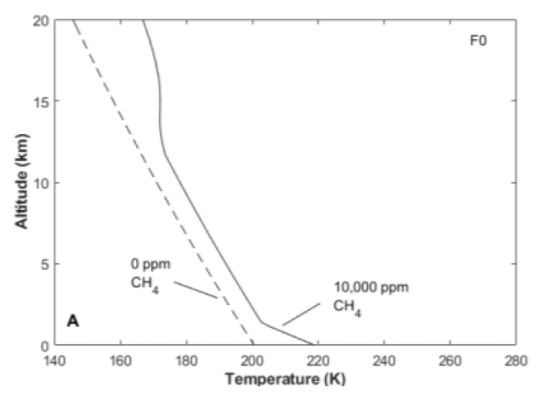 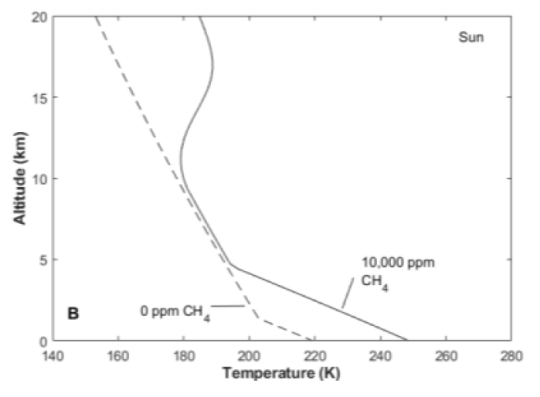 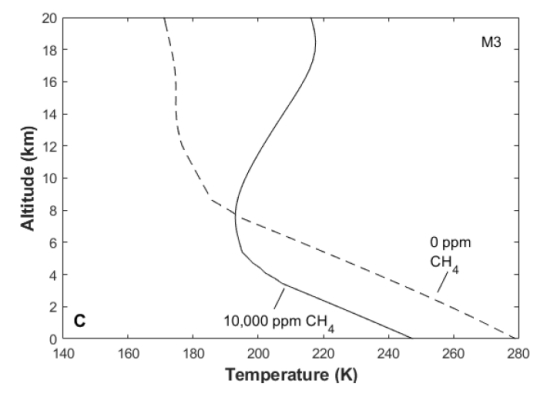 Figure 1. Changes in temperature profiles for a 3 bar CO2 atmosphere (S/So = 0.33) for a model planet with a surface pressure of about 4 bar orbiting a) an F0, b) a solar-analog, and c) an M3 host star when adding 1% (10,000 ppm) CH4. A temperature inversion forms for all three model planets when CH4 is added to the atmosphere. The surface temperature increases when 1% CH4 is added for the planet orbiting the F0 (18K) and solar analog (29K), but decreases for the planet orbiting an M3 star (31K).

Intuitively we expect that CH4 should extend the outer edge of the HZ for the F0 and G type stars as less energy is required to maintain a surface temperature above freezing (273K). For K3 stars and hotter, their model adding CH4 does indeed extend the HZ’s outer edge, quite substantially, while the inner edge remains fairly similar in distance from the star. However, because of the reduced surface temperature of the cooler stars, especially the ubiquitous M-types, CH4 reduces the range of the HZ, pulling the outer edge of the HZ closer to the star.

Figure 2 shows the effect of different mixing ratios of CH4 on the effective stellar flux (SEFF) needed to maintain a surface temperature above freezing against stellar types. Some cooler star exoplanets at the outer edges of their HZ zones are shown, indicating that some may have frozen surfaces if they have CH4 as an atmospheric gas component. 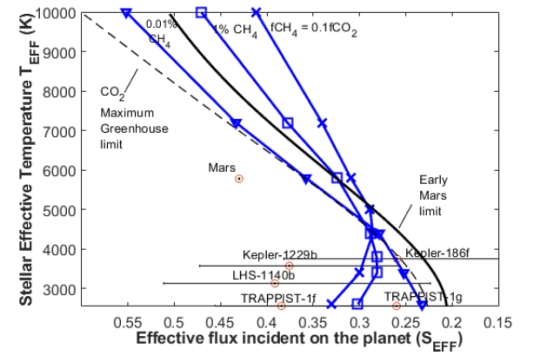 Figure 2. The effect of adding methane to the outer edge of the classical HZ. Stellar effective temperature versus the effective stellar flux (SEFF) for the outer limits of the Habitable Zone. The traditional outer HZ limit, the CO2 maximum greenhouse limit (dashed), is shown along with the empirical outer edge (solid black) and outer edge limits (solid blue) containing various amounts of CH4: 10 ppm (triangle), 1% (square), and fCH4 = 0.1 x fCO2. Some confirmed planets near the outer edge are included with error bars displayed.

The presence of CH4, therefore, has an impact on target exoplanet life. For Earth, CH4 might help explain the problem of the young, faint sun. When the earth was formed, the lower luminosity of the sun was insufficient to raise the surface temperature above freezing, yet life clearly evolved quite early. CH4 emission by methanogens during the Archean eon may have warmed the Earth’s surface sufficiently to have allowed liquid oceans and prokaryotes to evolve, and certainly ensured that an ice-free surface allowed photosynthetic blue-green bacteria to harvest solar energy.

Because CH4 extends the outer edge of the HZ for our sun, calculations suggest that early Mars was within the HZ if it had a dense CO2 atmosphere with a CH4 component. If so, this would support the theory of liquid seas on its surface and possibility that life also emerged to produce the needed CH4, or hydrogen (H2) to maintain its warmth as the atmosphere initially waned [6]. As the atmosphere was eventually largely stripped, the surface cooled and the seas froze to become the subsurface glaciers and frozen aquifers that we detect today, as well as the polar ice caps of frozen water and CO2. Whether life still exists below the surface is unknown, although there are tantalizing hints that just maybe methanogens are the source of the detected CH4 in the atmosphere, rather than geologic emissions.

The authors suggest that due to the far higher biogenic source of CH4, exoplanets around hotter stars on the edge of their HZ’s with detectable CH4 might well be evidence that they are living worlds. This is further bolstered by their model that shows CH4 levels can create a sort of Gaian “Daisy World” [2] where the surface temperature is maintained by processes that stabilize CH4 levels. Figure [3] shows this. Point P2 is stable as a declining CH4 level increases the surface temperature, increasing the CH4, while levels above that point reduce the temperature and reduce the emitted CH4. 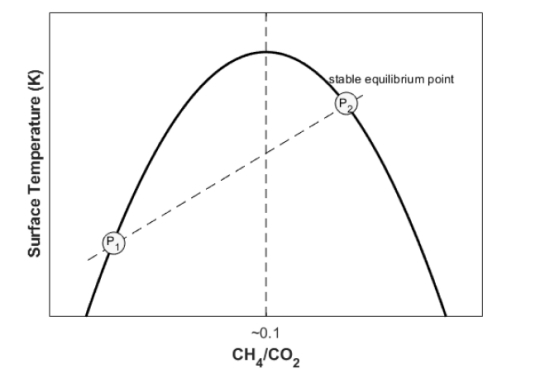 Figure 3. Proposed “Daisyworld” scenario for planets at the outer edge of the methane HZ with CH4 in their atmospheres orbiting hotter (~A – G class) stars. The curved lines illustrate the effect that the CH4/CO2 ratio has on surface temperature whereas the straight lines depict the effect that
temperature has on the CH4/CO2 ratio (adapted from Domagal-Goldman et al. 2008).

However, this is not the case with M-star exoplanets. The authors’ model suggests that for these worlds, the increased CH4 cools the planet resulting in a freezing surface which might well extinguish the development of life. Therefore on a planet at the outer edge of the HZ evolving methanogens will cool, freezing the surface. Life would be forced to retreat to oceanic vents and the lithosphere, precluding the emergence of photosynthesis, and energetic motile, multicellular life.

Another question also remains unanswered. M-star dwarf exoplanets orbit so close to their star that they are likely tidally locked. As we have seen previously, such warm wet worlds are also likely to have high cloud cover and therefore higher albedos [4]. Do those factors influence the results of this model? The authors hint that these conditions do matter quite significantly and will be explored in their next paper. Stay tuned!