Looking through a recent Astrophysical Journal paper on gas giants in the habitable zone of their stars, I found myself being diverted by the distinction between a conservative habitable zone (CHZ) and a somewhat more optimistic one (OHZ). Let’s pause briefly on this, because these are terms that appear frequently enough in the literature to need some attention.

The division works like this (and I’ll send you to the paper for references on the background work that has developed both concepts): The OHZ in our Solar System is considered to be roughly 0.71 to 1.8 AU, which sees Venus as the inner cutoff (a world evidently barren for at least a billion years) and Mars as the outer edge, given that it appears to have been habitable in the early days of the system, perhaps some 3.8 billion years ago. ‘Habitable’ in both HZ categories is defined as the region around a star where water can exist in a liquid state on a planet with sufficient atmospheric pressure (James Kasting has a classic 1993 paper on all this).

The CHZ’s inner edge is considered to be at the ‘runaway greenhouse limit,’ where the breakdown of water molecules by solar radiation allows free hydrogen atoms to escape, drying out the planet at approximately 0.99 AU in our own system. Its outer edge, says the paper:

…consists of the maximum greenhouse effect, at 1.7 AU in our solar system, where the temperature on the planet drops to a point where CO2 will condense permanently, which will in turn increase the planet’s albedo, thus cooling the planet’s surface to a point where all water is frozen (Kaltenegger & Sasselov 2011).

It goes without saying that boundaries like these are going to vary from one planetary system to another, and it’s likewise clear that most of our thinking about habitable zone planets has gone in the direction of small rocky worlds as we mount the search for Earth analogues. What Stephen Kane (University of Southern Queensland), working with an undergraduate student at the university named Michelle Hill as well as colleagues at the University of California, Riverside has done is to identify 121 giant planets in Kepler data that could host habitable moons.

To be sure, the gas giants themselves aren’t considered candidates for life as we know it (though obviously we can’t rule out exotic species adapted to extreme conditions, like Edwin Salpeter’s ‘gasbags,’ free-floating lifeforms that might populate dense atmospheres — see Edwin Salpeter and the Gasbags of Jupiter for more). But the real focus is on those rocky moons that occur in such abundance in our own system.

“There are currently 175 known moons orbiting the eight planets in our solar system. While most of these moons orbit Saturn and Jupiter, which are outside the Sun’s habitable zone, that may not be the case in other solar systems,” says Kane. “Including rocky exomoons in our search for life in space will greatly expand the places we can look.” 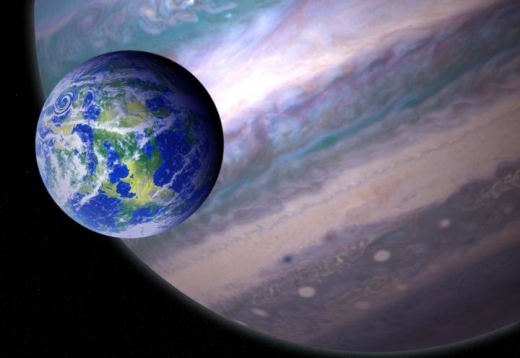 Image: This is an artist’s illustration of a potentially habitable exomoon orbiting a giant planet in a distant solar system. Credit: NASA GSFC: Jay Friedlander and Britt Griswold.

As we consider the different dimensions of habitable zones around other stars, we should also keep in mind the fact that the moons that may emerge in these systems can be as various as our own. Earth’s Moon, for example, seems to be the result of a giant impact early in the system’s formation. Most moons are thought to have formed by accretion within the dust disks around planets, but others can be captured by a planet’s gravitational pull — Triton seems to be an example of this. Thus we could find moons of considerably different composition than their host planet. Considering how many moons we see orbiting our gas giants, the assumption that moons exist around other such worlds in exoplanetary systems seems reasonable.

We still have no exomoon detections, but the search continues, and I always scan the latest papers from the Hunt for Exomoons with Kepler project that David Kipping runs with anticipation, along with those of exomoon theorist René Heller. Having a database of the giant planets we’ve identified thus far as being in the habitable zone of their star may help us target future observations to refine the expected properties of their moons, assuming these exist. Such moons would receive energy from the primary star, of course, but would also receive reflected radiation from the planet they orbit. René Heller has proposed that exomoons in a habitable zone could provide a better environment for life than Earth itself. Let me quote the Hill paper:

Exomoons have the potential to be what [Heller] calls ”super-habitable” because they offer a diversity of energy sources to a potential biosphere, not just a reliance on the energy delivered by a star, like earth. The biosphere of a super-habitable exomoon could receive energy from the reflected light and emitted heat of its nearby giant planet or even from the giant planet’s gravitational field through tidal forces. Thus exomoons should then expect to have a more stable, longer period in which the energy received could maintain a livable temperate surface condition for life to form and thrive in.

Discussing the difficulties of exomoon detection, such as the fact that multiple moons around a single planet may eliminate a useful transit timing signal (this is Jean Schneider’s work) and the problems of direct imaging, it’s interesting to see that microlensing remains a candidate. It’s also intriguing to ponder the fate of exomoons, as this paper does, in terms of migrating gas giants and the likelihood that their moons will be lost. We still have much to learn about the movement of giant planets and the effect of their migration upon their own moons as well as other planets.

Once we have a firm exomoon detection, we can begin to characterize the possibilities. As we await improvements in our technology, deepening our knowledge of potential exomoon host planets is the best we can do, and that would begin, as this paper suggests, with radial velocity follow-up observations on gas giant habitable zone candidates like the ones compiled by the authors.

Next post: Cosmic Engineering and the Movement of Stars