Although it appears in the same constellation as seen from Earth (Centaurus), Omega Centauri has nothing to do with the Alpha Centauri stars that so interest interstellar flight theorists. The brightest globular cluster visible in our skies, Omega Centauri is anything but close (16,000 light years out) and, containing several million stars, is the largest globular cluster in our galaxy. We may in fact be looking at the core of a dwarf galaxy once absorbed by the Milky Way.

But although it’s quite distant, Omega Centauri may be the source of the relatively nearby Kapteyn’s Star, just 13 light years from the Sun. Where this gets intriguing is that Kapteyn’s Star, (named after Dutch astronomer Jacobus Kapteyn) is known to have at least two planets, one of them considered the oldest known potentially habitable planet — let’s call it a ‘temperate Super-Earth’, as Guillem Anglada-Escudé and team have done — at 11 billion years old.

Steven Kane (UC-Riverside), working with graduate student Sarah Deveny (San Francisco State) has now produced a paper taking a deep dive into Omega Centauri and its own prospects for habitability. Beginning with 470,000 stars in the cluster’s core, the duo focused on a subset of 350,000 of these, using color as a gauge of temperature and age in making their choice. The idea was to calculate habitable zones around each star, in which a rocky world might have liquid water on the surface. 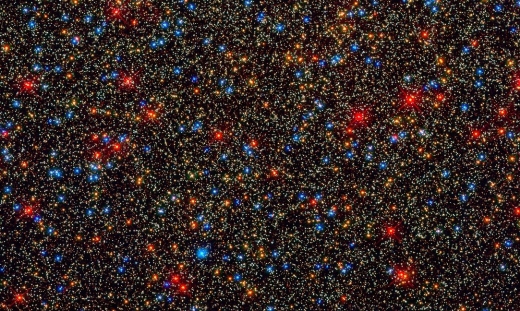 The paper Kane and Deveny produced makes the point that most exoplanet searches have occurred around field stars, but globular clusters are attractive hunting grounds given the age of their stars and the possibility they offer to study planet formation and evolution as affected by the cluster. But so far planet hunting in such clusters has not proven profitable. A 2000 study using the Hubble instrument to study 34,000 stars in the core of the cluster 47 Tucanae revealed not a single transit, nor did follow-ups in the less crowded outer regions of the cluster.

Nor have transiting planets been found in the cluster NGC 6397. Undaunted, Kane and Deveny here analyze Hubble data on the core of Omega Centauri and calculate habitable zones for the observed stars. The idea is to determine how conditions in the Omega Centauri core affect the potential habitability of planets around main sequence stars, the latter being determined by a color-magnitude diagram with data drawn from filters described in the paper. Luminosity and effective temperatures were calculated using Hubble instrument filters from the Dartmouth Stellar Evolution Database, assuming 11.5 billion years as the age in the applied model.

Kane and Deveny use habitable zone relationships and methodologies found in the literature, going on to calculate the conservative habitable zone (CHZ) and optimistic habitable zone (OHZ), boundaries that Kane previously used in creating a catalog of Kepler habitable zone planets. Given the star properties determined by the above analysis, which showed that the sample under consideration was dominated by low-mass stars, the researchers found that about 50 percent of the sample had an outermost habitable zone boundary within 0.5 AU of the star.

No surprise there, as most of the stars in the Omega Centauri core are red dwarfs, implying habitable zones much closer than those around G- and K-class stars. Compact planetary systems of the kind we see, for example, around small M-dwarfs like TRAPPIST-1 would seem to stand a better chance of survival from disruption by nearby stars, but conditions here are truly tight. Our Sun has a separation of over 4 light years from its nearest stellar neighbors, but within Omega Centauri’s core, the average distance is a scant 0.16 light years. That would set up frequent encounters between stars, on the order of one every 1 million years.

The result does not bode well for these planets, as the paper notes:

…the compact nature of the HZ regions is more than offset by the potential disruption of planetary systems, where close encounters of only 0.5 AU are expected to occur on average every 1.65 × 106 years. Though the large resulting population of free-floating terrestrial planets are intrinsically interesting from formation and dynamical points of view, the potential for habitability in the ω Cen core environment is significantly reduced by such scattering events. The primary lesson that can be extracted from this analysis is the underlining of the importance of quantifying the long-term dynamical stability of orbits inside HZ regions taking into account both internal (planetary) dynamics and external (stellar) interactions. 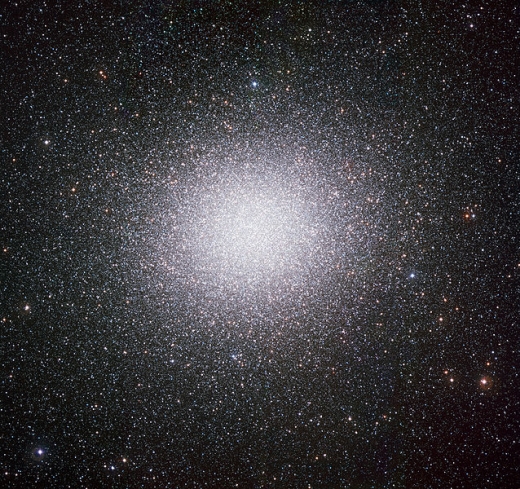 Image: The globular cluster Omega Centauri — with as many as ten million stars — is seen in all its splendor in this image captured with the WFI camera from ESO’s La Silla Observatory. The image shows only the central part of the cluster — about the size of the full moon on the sky (half a degree). North is up, East is to the left. This colour image is a composite of B, V and I filtered images. Note that because WFI is equipped with a mosaic detector, there are two small gaps in the image which were filled with lower quality data from the Digitized Sky Survey. Credit: ESO.

Because we have no firm knowledge of how common planets are in this environment, we’re left to speculate, but the paper’s calculations show that numerous compact planetary systems could exist in Omega Centauri. But even assuming a large population of rocky worlds, cluster dynamics would keep encounters between these planetary systems happening on a regular basis. The scenario of planets stripped from their host stars seems inimical to life.

But a possibility remains. Terrestrial-class worlds disrupted from their home systems could constitute a large population of free-floating worlds that might be analyzed through gravitational microlensing. There are some studies in the literature arguing that free-floating worlds with a thick hydrogen atmosphere could retain habitable conditions at the surface, so as the authors note, habitable planets cannot be entirely ruled out despite the problem of stability.

And, of course, encounter rates between stars will vary depending on the size and density of the cluster:

“The rate at which stars gravitationally interact with each other would be too high to harbor stable habitable planets,” Deveny said. “Looking at clusters with similar or higher encounter rates to Omega Centauri’s could lead to the same conclusion. So, studying globular clusters with lower encounter rates might lead to a higher probability of finding stable habitable planets.”

Such studies will doubtless be pursued. After all, the close separation among ancient stars at a globular cluster’s core would seem to give any civilizations that formed near them the opportunity to explore nearby systems and eventually the entire cluster. We’ve talked before about the work of Rosanne Di Stefano (Harvard-Smithsonian Center for Astrophysics), who makes this case (see Globular Clusters: Home to Intelligent Life?). Says Di Stefano:

In fact, Di Stefano argues that portions of many globular clusters other than the core can be considered ‘sweet spots’ where habitable orbits are stable for long periods. So the question of habitability and planet formation itself inside globular clusters is one of continuing interest.

One thing is clear. When we talk about habitable zones, we have to take into account the dynamical stability of the orbits involved, examining not just the planets themselves but the possibility of encounters with nearby stars. In dense environments, such interactions and the scattering they cause would be game-changers. Cluster outskirts may offer better opportunities.

The paper is Kane and Deveny, “Habitability in the Omega Centauri Cluster,” accepted at The Astrophysical Journal (preprint). The Di Stefano paper mentioned above is “Globular Clusters as Cradles of Life and Advanced Civilizations,” Astrophysical Journal Vol. 827, No. 1 (5 August 2016). Abstract.