One of the memorable things about 1995 (and this was also the year of the first detection of an exoplanet around a main sequence star) was the release of the Galileo spacecraft’s descent probe. Dive into that howling maelstrom, it would seem, and instant obliteration should follow. But the probe had been designed with a heavy duty heat shield to protect it during its journey. It kept transmitting after scorching its way into Jupiter’s atmosphere at 47 kilometers per second, 30 km/sec faster than Voyager 1. The probe returned data for fully 58 minutes before its demise.

Here’s how two science fiction novelists handle a descent into the Jovian clouds:

Slowly, the fine fretwork of the ammonia cirrus clouds above him became obscured by brown and salmon layers of intervening chemistry, the air stained a nicotine-coloured haze of complex carbon molecules. Soon it was warmer than a summer’s day out there, and already the gondola was enduring more than ten atmospheres of pressure, the structure making slight creaking sounds as it absorbed the mounting forces. Falcon eyed the hull around him with a certain wariness, trusting that the Kon-Tiki’s molecular-scale refurbishments had been as thorough as claimed.

A certain wariness seems justified. And this:

Overhead, the sky was darkening through shades of purple. This was not the onset of evening — dusk was still hours away — but the gradual filtering out of solar illumination. Much the same thing happened in the depths of Earth’s oceans. The main difference here was that the external temperature was steadily rising, even as the iron crush of the atmosphere redoubled its hold on the gondola.

That’s Stephen Baxter and Alastair Reynolds in The Medusa Chronicles (Saga, 2016), which picks up on Arthur C. Clarke’s 1971 novella “A Meeting with Medusa,” and takes its hero into the heart of Jupiter, the earliest part of which descent is glimpsed in the paragraph above. Doubtless Baxter and Reynolds were all over the Galileo data as they made the transition between what we know to the ingenious plot they constructed. Galileo’s data had their share of surprises, showing us, for example, stronger winds than expected, but that was just a start for the adventures of the book’s hero.

Let’s leave science fiction for the moment, though I’ll come back to it. The region the Galileo probe descended through turned out to be drier than expected, another Galileo surprise given that ice is the primary constituent of Jupiter’s moons. Now we have new work delving into the question of water on Jupiter. A team led by Gordon Bjoraker (NASA Ames), working with collaborators at several US universities, suggests in a paper in The Astronomical Journal that water is detectable and it may be out there in large quantities indeed.

While Jupiter’s atmosphere is 99 percent hydrogen and helium, it could still contain many times the amount of water we have on Earth. The scientists probed the question using data gathered by ground-based telescopes to detect traces of water deep within Jupiter’s Great Red Spot, working with the iSHELL spectrograph at the NASA Infrared Telescope Facility and the Near Infrared Spectrograph on the Keck 2 telescope (both instruments are at Mauna Kea in Hawaii):

In this paper we present ground-based observations of Jupiter’s Great Red Spot between 4.6 and 5.4 µm. The 5-µm region is a window to the deep atmosphere of Jupiter because of a minimum in opacity due to H2 and CH4. This spectrum provides a wealth of information about the gas composition and cloud structure of the troposphere. Jupiter’s 5-µm spectrum is a mixture of scattered sunlight and thermal emission that varies significantly between Hot Spots and low-flux regions such as the Great Red Spot. 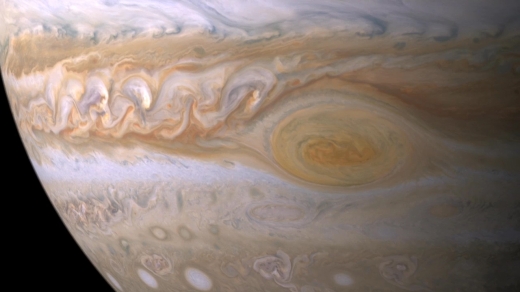 Image: Trapped between two jet streams, the Great Red Spot is an anticyclone swirling around a center of high atmospheric pressure that makes it rotate in the opposite sense of hurricanes on Earth. Credit: NASA/JPL/Space Science Institute.

The Great Red Spot is an enormous storm that, though mutable, has continued to rage for at least 150 years and perhaps much longer than that. The researchers found evidence of three layers of clouds here, with the deepest at 5-7 bars (1 bar approximates the average atmospheric pressure at sea level on Earth). This would be about 160 kilometers below the cloud tops in a region where temperature is thought to reach the freezing point of water. The Bjoraker team describes an opaque cloud layer detected at around 5 bars as ‘almost certainly a water cloud.’

What’s crucial here is the methodology, because if the methods used on the Great Red Spot can be validated by the Juno spacecraft, we can apply them to other gas giants. Now orbiting Jupiter until 2021 and conducting its own search for water using its infrared spectrometer, Juno has as a key objective the identification and characterization of atmospheric H2O, although observations using the spacecraft’s Microwave Radiometer are tricky given the low microwave absorptivity of H2O gas when compared to ammonia.

Thus we have a necessary synergy between ground-based measurements of both H2O and NH3 to support what Juno’s MWR instrument finds and to increase the accuracy of its calibration. This Clemson University news release explains that within months, the team will be collecting ‘many gigabytes’ of data with the iSHELL spectrograph that can be matched against further Juno observations, with a suite of automated software being built to analyze the results.

Getting a better picture of Jupiter’s water content could prove useful in a number of ways, and might even take us in a science fictional direction, says Clemson University co-author Máté Ádámkovics:

“The discovery of water on Jupiter using our technique is important in many ways. Our current study focused on the red spot, but future projects will be able to estimate how much water exists on the entire planet. Water may play a critical role in Jupiter’s dynamic weather patterns, so this will help advance our understanding of what makes the planet’s atmosphere so turbulent.”

True enough. And this takes us back into the imaginative realm of Clarke, Baxter and Reynolds:

“And, finally, where there’s the potential for liquid water, the possibility of life cannot be completely ruled out. So, though it appears very unlikely, life on Jupiter is not beyond the range of our imaginations.”

For those wanting to explore notions of life within Jupiter’s atmosphere, have a look at Larry Klaes’ fine essay Edwin Salpeter and the Gasbags of Jupiter, which looks at a Cornell University collaborator of Carl Sagan and the duo’s unusual musings on a Jovian taxonomy.