‘Rogue’ Planet Population in the Galaxy

We’ve recently looked at gas giant planet formation, and specifically the stages in which Jupiter seems to have formed — this is the work of Thomas Kruijer (University of Münster) and colleagues as summarized in A Three Part Model for Jupiter’s Formation. Whether or not the details of Kruijer and team’s model are correct, it seems evident that gas giants must form quickly, based on current theories. These involve the formation of a large solid core, with gas accretion building up a thick atmosphere at a time when the disk around the parent star is still rich in materials.

In this thinking, planets like the Earth come along much later than the gas giants that are the first to form. Get a few million years into the evolution of a stellar system and there should be evidence of a gas giant, if one is going to form, but terrestrial worlds can take up to 100 million years to emerge. This has captured the interest of Nader Haghighipour (University of Hawaii), whose work was presented at the General Assembly of the IAU meeting in Vienna.

Haghighipour is interested in so-called ‘rogue’ planets, and his focus is on early system formation as a way of exploring their population in the galaxy. Bruce Dorminey has a good entry on this in Forbes, recounting the basics of Haghighipour’s statistical study, one that involved 500 simulations of terrestrial planet formation, including multiple models.

What gets intriguing here is that Haghighipour believes most stellar systems wouldn’t be very good at ejecting planets out of the parent system. This has bearing, of course, on the question of how many rogue planets, free-wandering worlds without a star, might be out there.

It is an issue that is a long, long way from being resolved. Without the reflected light of a primary, such planets are extremely hard to detect except through gravitational lensing, where the light of a background star may be affected by the curvature of spacetime in the presence of a gravitational well, the distortion giving us information about the intermediate object. Used in the exoplanet hunt, gravitational microlensing allows us to spot planets down to rocky, terrestrial-sized worlds around stars thousands of light years away, with the significant limitation that such observations are one-off affairs. You can’t realign the stars to do a second run.

The Microlensing Observations in Astrophysics (MOA) survey, based in New Zealand, as well as the Optical Gravitational Lensing Experiment (OGLE), using a 1.3 meter telescope in Chile, have found a small number of possible ‘rogue’ planets of roughly Jupiter’s mass. A 2011 paper made the case that given microlensing probabilities — and taking into account the efficiency of the equipment at these installations and the rate of such lensing — there could be as many rogue planets in the Milky Way as there are stars. Louis Strigari (Stanford University) has likewise estimated high numbers of rogue planets ranging from Ceres-size on up to gas giants. 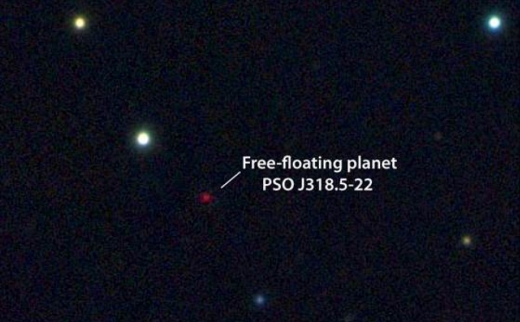 Image: One apparent free-floating planet turned up in a search for brown dwarfs. This multicolor image is from the Pan-STARRS1 telescope, showing PSO J318.5-22, in the constellation of Capricornus. The planet is extremely cold and faint, about 100 billion times fainter in optical light than the planet Venus. Most of its energy is emitted at infrared wavelengths. The image is 125 arcseconds on a side. Credit: N. Metcalfe & Pan-STARRS 1 Science Consortium.

But at the same IAU meeting, according to Dorminey’s report, Yutong Shan (Harvard University) presented evidence from the K2 mission, using data from both the revived Kepler and ground-based surveys. Shan’s team was hunting for free-floating planets, but while they found candidates, none were conclusive — in other words, the detections may be brown dwarfs.

For his part, Nader Haghighipour believes that there aren’t as many rogue planets to find as some believe. The reason: It’s when the protoplanetary disk is seething with youthful energies that planets are likely to be ejected — few terrestrial worlds available then — and only 1-2 percent of these would leave the system. Shan’s Kepler study is ongoing, but as Dorminey notes, the early results seem to support Haghighipour in his doubts over rogue planet ejections.

But we are early in this work. Let me also draw your attention to work at the University of Oklahoma from Xinyu Dai and Eduardo Guerras. Working with data from the Chandra X-Ray Observatory and microlensing models of their own design, the duo have been studying the black hole at the center of quasar RX J1131–1231. Here we have a background quasar being lensed by the foreground black hole, and Dai and Guerras show that these emissions near the Schwarzschild radius of the black hole can be affected by planets nearby in its galaxy.

What we get here is another ‘rough cut’ at rogue planets, this time in another galaxy, and in it, the authors calculate about 2000 objects per main sequence star, in sizes ranging from the Moon to Jupiter. Dai and Guerras, in other words, come up with numbers that come closer to supporting Strigari than Haghighipour. All of which makes a strong case that on the subject of rogue planets in this or any galaxy, what we still don’t know vastly outweighs what we do.