Here’s another, wider look at New Horizons’ view of Ultima Thule (MU69), its next target, which we first saw in late August, though the image was acquired at mid-month. I like this view because it gets across just what a tricky acquisition this was. Look at the background star-field! Consider that Ultima is still 100 times fainter than Pluto as seen from Earth, making it about a million times fainter than a naked eye object. LORRI, the spacecraft’s Long Range Reconnaissance Imager, once again demonstrates its key role in the mission. 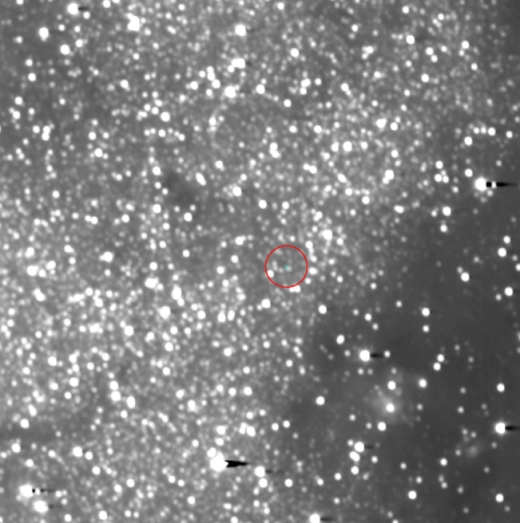 Image: New Horizons spotted Ultima Thule for the first time on August 16, near the center of the red circle in this LORRI image of the dense Milky Way star field where Ultima lies. Credit: JHU/APL.

Getting the image as early as it did was something of a coup for New Horizons, this being the first attempt, made just after the spacecraft transitioned from spin-stabilized mode (during cruise) to pre-flyby mode, which allows its cameras and other instruments to point as needed. According to New Horizons’ PI Alan Stern, the detection images were returned to Earth on August 18-19, where they received the necessary processing to remove artifacts. Says Stern:

Scientists on our team in Maryland, Arizona, and Colorado jumped right onto those data, carefully processing them to remove background stars and other artifacts — and out popped Ultima, a faint beacon, dead ahead, in just the very pixel our navigation crew had predicted it would show up!

Useful work indeed, allowing regular imaging from the spacecraft to refine New Horizons’ course. We learn in Stern’s latest report that the team plans to execute a course correction on October 3, affecting the craft’s trajectory by about 3 meters per second, so the team is already fine-tuning approach and arrival parameters. As part of future course refinements, remember that we now have data from the occultations of a background star by Ultima that occurred on August 3-4, events that were observed by teams in Senegal and Colombia. For more on this and the previous occultation work in Patagonia, see On to Ultima Thule.

We can anticipate a full update from mission scientists at the 50th annual meeting of the Division for Planetary Sciences, coming up in late October in Knoxville, TN, where new results from Pluto/Charon will also be discussed. Right now, the search for collision hazards near Ultima continues as does navigation imaging of the target, which could well lead to future course-corrections. Although no hazardous debris has yet turned up in the occultation data, November and December will see the LORRI instrument scanning the target intensely at closer range. And Ultima Thule isn’t the only KBO in the mix, as Stern reports:

New Horizons will collect data on a half-dozen other Kuiper Belt objects and the plasma and dust environment way out there in the Kuiper Belt, nearly 4 billion miles from Earth. Also, our flight team will be finalizing the software loads to drive the spacecraft’s close-up flyby observations of Ultima and its environment, from geology to composition, to searches for moons, rings and any atmosphere Ultima may sport.

And for another sense of scale, the image below views New Horizons’ current position in relation to the rest of the Solar System. Now would be a good time to read, if you haven’t already, Stern and David Grinspoon’s Chasing New Horizons (Picador, 2018). In the book, the authors discuss how critical pre-flyby planning and maneuvers were to get the spacecraft to arrive at closest approach to Pluto/Charon within the tight window (9 minutes!) necessary for all the spacecraft’s programmed pointing maneuvers to center its targets.

What Stern tells Grinspoon here is just as germane to the approach to Ultima Thule:

Much of how New Horizons achieved this goal was done with careful optical navigation and rocket-engine firings that the spacecraft performed to home in on the closest-approach time. But mathematical analysis had shown that this alone might not be good enough to guarantee arrival in the critical plus-or-minus 540 second window. So the spacecraft’s engineers at APL also built in some clever software to correct for any remaining timing errors once it was too late to fire the engines.

The importance of the optical information is likewise clear:

As the spacecraft approached Pluto, every day the optical navigation team used new images to determine just how far off the closest approach timing was going to be, and then calculated the timing knowledge update needed to correct for that. Concurrently, Leslie Young and her encounter planning team used sophisticated software tools to generate a ‘science consequences report,’ in which each close-approach observation was simulated for the newly predicted timing error to determine, assuming no correction was made, which would succeed and which would fail.

For the Ultima Thule encounter, the New Horizons team is conducting mission simulations and working through procedures for over 250 possible spacecraft contingencies should problems arise (as part of that effort, new fault protection software has already been uploaded). With the journey from Pluto/Charon to the KBO now 90 percent complete, we can look forward to the New Year’s Eve flyby, followed by further data acquisition from the Kuiper Belt beyond.