Looking Back at Titan

There are two senses in which we are ‘looking back’ at Titan in today’s post. On the one hand, the New Horizons spacecraft has already taken sensors well beyond Pluto in preparation for the encounter with MU69. From its perspective, anything in the Solar System inside the Kuiper Belt is well behind. What with our Pioneers, Voyagers and now New Horizons, the human perspective has widened that far.

But we’re also looking back in terms of time when we revisit the Cassini mission and what it had to tell us about Saturn’s moons. Below is the final view the spacecraft had of Titan’s lakes and seas, a view of the north polar terrain showing the abundance of liquid methane and ethane. The view was acquired on September 11, 2017, a mere four days before Cassini was sent to its fiery end in Saturn’s atmosphere as a way of avoiding any potential future contamination. 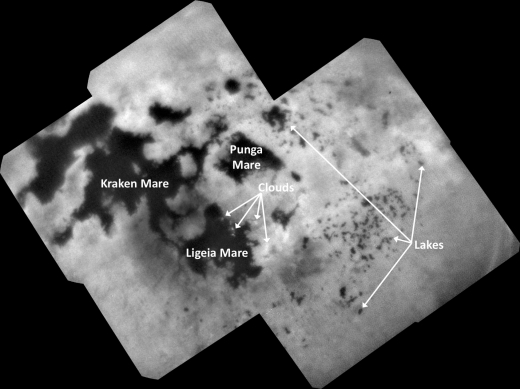 Image: This view of Titan’s northern polar landscape was obtained at a distance of approximately 140,000 kilometers (87,000 miles) from Titan. Image scale is about 800 meters (0.5 miles) per pixel. The image is an orthographic projection centered on 67.19 degrees north latitude, 212.67 degrees west longitude. An orthographic view is most like the view seen by a distant observer looking through a telescope. Credit: NASA/JPL-Caltech/Space Science Institute.

Just above the center of this mosaic is Punga Mare, 390 kilometers (240 miles) across, with Ligeia Mare (500 kilometers, or 300 miles wide) below center. The large body of methane/ethane at left is Kraken Mare, some 1200 kilometers across (730 miles). Note the scattering of small lakes around the seas, especially at the right side of the mosaic.

Also interesting is the small amount of cloud cover, though a few do appear just below center in the image, as well as several above Ligeia Mare. We would expect clouds, since Titan’s methane cycle involves rainfall, surface runoff, collected methane in large bodies like these, and evaporation, much like Earth’s water cycle. And in fact, cloud activity was found during southern summer over the south pole. But here we’re in northern spring and summer, with few clouds.

“We expected more symmetry between the southern and northern summer,” said Elizabeth (“Zibi”) Turtle of the Johns Hopkins Applied Physics Lab and the Cassini Imaging Science Subsystem (ISS) team that captured the image. “In fact, atmospheric models predicted summer clouds over the northern latitudes several years ago. So, the fact that they still hadn’t appeared before the end of the mission is telling us something interesting about Titan’s methane cycle and weather.”

Remember that among the many things Cassini found on Titan are two different kinds of methane/ethane-filled depressions that create the features we see in this mosaic. Some are responsible for the collection of the large seas, which are not only hundreds of kilometers across but evidently several hundred meters deep, all fed by branching channels like rivers on Earth. The much smaller lakes show terrain with steep walls and rounded edges. They do not appear to be associated with incoming channels, meaning they are filled by rainfall or by upwelling from below, and it’s known that some of them fill and dry out during Titan’s seasonal cycle. 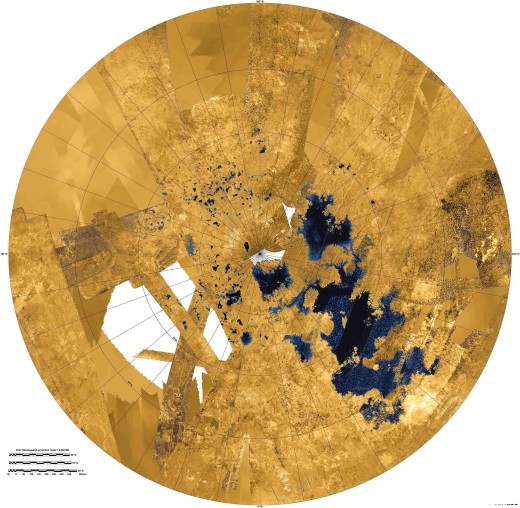 Image: An earlier, colorized mosaic from NASA’s Cassini mission shows Titan’s northern land of lakes and seas. Here the data were obtained from 2004 to 2013. In this projection, the north pole is at the center. The view extends down to 50 degrees north latitude. In this color scheme, liquids appear blue and black depending on the way the radar bounced off the surface. Land areas appear yellow to white. Credit: NASA/JPL-Caltech/Space Science Institute.

In a 2015 study, Thomas Cornet (European Space Agency) and colleagues went to work on Titan’s lakes, noting that they are reminiscent of ‘karstic’ landforms on Earth. On our planet, these result from erosion due to groundwater and rainfall affecting dissolvable rock such as limestone and gypsum, creating both caves and sinkholes or, in desert climates, salt pans.

Cornet’s team worked out how long it would take to create features like this on Titan, assuming a surface covered in organic material, with the main dissolving agent being liquid hydrocarbons operating in a climate based on current models. The result: 50 million years to create a 100-meter (330 ft) depression in the polar regions. Says Cornet:

“We compared the erosion rates of organics in liquid hydrocarbons on Titan with those of carbonate and evaporite minerals in liquid water on Earth. We found that the dissolution process occurs on Titan some 30 times slower than on Earth due to the longer length of Titan’s year and the fact it only rains during Titan summer. Nonetheless, we believe that dissolution is a major cause of landscape evolution on Titan and could be the origin of its lakes.”

Thus we find a process of erosion dependent on rock chemistry, rainfall rate and surface temperature that has similarities with what we see on Earth on what Cornet calls a “relatively youthful billion-year-old surface,” a comparatively slow surface transformation that is even slower at lower latitudes, where the rainfall is less frequent. For more on this, see New Insights into Titan.

The Cornet paper on Titan’s surface features is “Dissolution on Titan and on Earth: Towards the age of Titan’s karstic landscapes,” Journal of Geophysical Research – Planets 25 April 2015 (full text).