No Heat Signature of Europan ‘Plumes’

One of the youngest surface features on Europa draws attention because of its possible connection with what lies beneath the Jovian moon’s ice. The dark center of Pwyll crater, visible in the image below, is some 40 kilometers across, with a central peak reaching about 600 meters. At issue is the terrain resulting from the impact causing the crater. An impact perhaps 20 million years ago seems to have blown water and ice across the Europan surface. Evidence of a possible plume from Europa’s ocean in this area is the subject of continuing work.

The bright terrain around the crater suggests water ice, and note, too that the Pwyll impact left ejecta rays as far as the Conamara Chaos region 1000 kilometers to its north. Conamara Chaos features themselves have been studied extensively for terrain suggestive of melting and refreezing ice. We saw recently how Xianzhe Jia (University of Michigan), working with the SETI Institute’s Melissa McGrath, used data from the Galileo mission to support later Hubble evidence of possible plumes on Europa (see Galileo Evidence for Plumes on Europa). 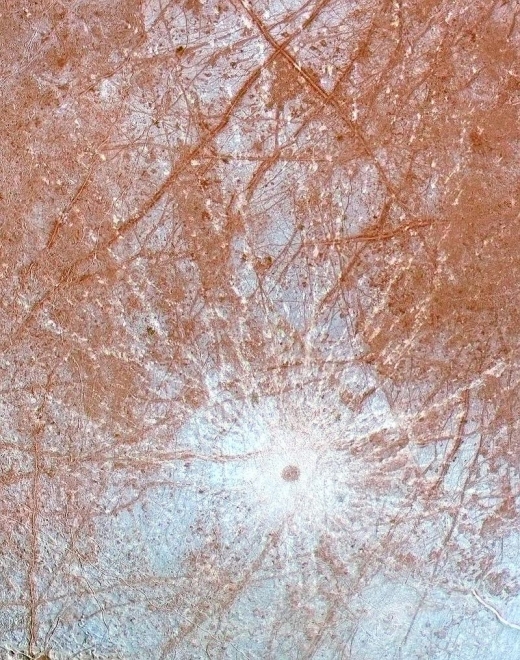 Image: This enhanced color image of the region surrounding the young impact crater Pwyll on Jupiter’s moon Europa was produced by combining low resolution color data with a higher resolution mosaic of images obtained on December 19, 1996 by the Solid State Imaging (CCD) system aboard NASA’s Galileo spacecraft. This region is on the trailing hemisphere of the satellite, centered at 11 degrees South and 276 degrees West, and is about 1240 kilometers across. North is toward the top of the image, and the sun illuminates the surface from the east. The 26 kilometer diameter impact crater Pwyll, just below the center of the image, is thought to be one of the youngest features on the surface of Europa. The diameter of the central dark spot, ejecta blasted from beneath Europa’s surface, is approximately 40 kilometers, and bright white rays extend for over a thousand kilometers in all directions from the impact site. Credit: NASA/JPL-Caltech.

Plumes on Europa would be a momentous discovery, one reason the elusive evidence for their existence is proving so controversial. For if we had active plumes venting seawater from the deep Europan ocean, we could study their composition without the need for landing and drilling through the ice. Europa, like Enceladus, could prove a target for astrobiologically-focused missions in the near future, and indeed, the two researchers I cited above are both associated with the Europa Clipper science team, which will perform multiple flybys of the moon.

This morning we learn that Julie Rathbun (Planetary Science Institute) has dug into the evidence for Europan plumes in a talk titled “A closer look at Galileo Thermal data from possible plume sources near Pwyll, Europa,” with news that makes these plumes more unlikely. For what we would expect at Europa is similar to what we see at Enceladus, the signature of hotspots that flag the energy source driving the plume activity. Similar hotspots can be found on Earth at geysers like Yellowstone and its associated hot springs. But no Europan hotspots can be found.

Rathbun states the issue concisely, so let me just quote her on this:

“We searched through the available Galileo thermal data at the locations proposed as the sites of potential plumes. Reanalysis of temperature data from the Galileo mission does not show anything special in the locations where plumes have possibly been observed. There are no hotspot signatures at either of the sites.”

Such plumes may exist, but appear only rarely. Rathbun continues:

Rathbun presented these findings at a Division for Planetary Sciences press conference held at the American Astronomical Society 50th annual meeting in Knoxville, TN. Plume research is ongoing, and bear in mind that the possible plume in the area near Pwyll is not the only one being considered. There is evidence in the Xianzhe Jia and Melissa McGrath work for plume activity about 1,000 kilometers northeast of the first site. Indeed, Jia and McGrath found that magnetic perturbations found by Galileo during its E12 flyby were consistent with a rising plume.

So the jury is still out. If we can get Europa Clipper off, perhaps as early as 2022, its flybys could prove conclusive one way or another. While we wait, analysis and simulations of the interactions between possible plumes and the plasma environment around Europa continue. We have only two Galileo flybys of the Moon containing magnetometer data that came closer than 400 kilometers from the surface, where we might expect a plasma and magnetic field signature if plumes exist, but Europa Clipper will ramp up the magnetic and thermal dataflow considerably.

The Xianzhe Jia paper is “Evidence of a plume on Europa from Galileo magnetic and plasma wave signatures,” published online at Nature Astronomy 14 May 2018 (abstract).

Next post: A Thermal Map of Europa (& an Intriguing Anomaly)